Back to TVNewsCheck Home Print this page
EXECUTIVE OUTLOOK 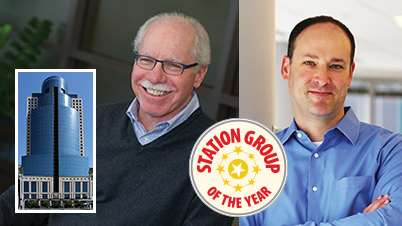 The 138-year-old company with 33 TV stations in 24 markets is moving boldly into the digital universe. Outgoing CEO Rich Boehne (left) says it’s following its audience, but admits it’s risky and that the journey isn’t for the faint of heart. Incoming CEO Adam Symson (right) shares Boehne's enthusiasm, but doesn't see it as quite so radical. In light of this foreward-looking strategy and the company's continued commitment to producing the best in local news, TVNewsCheck named E.W. Scripps its Station Group of Year for 2017. (Collage by Bill Knight)

Since joining E.W. Scripps Co. in 1985 as a newspaper reporter, CEO Rich Boehne says the company has undergone three revolutions.

The first was the company’s investment in cable systems (“Broadcasters were shouting it will never work — people will never pay for television,” he says). The second, in the 1990s, was when his friend Ken Lowe launched HGTV and nurtured it into a thriving cable programming enterprise that was spun off as Scripps Interactive Networks (“I was in the rebel camp on that one.”). And the third is happening now.

“I guess I’m Che Guevera on this one, the digital revolution,” he says.

This revolution has taken the form of a substantial investment in national digital media. Over the past two years, Scripps has spent $124 million to buy Newsy, a millennial-targeted news service; Midroll, a podcasting producer and distributor; Stitcher, a podcasting platform; and Cracked, a producer of humorous digital content.

It’s been driven by the need to follow the audience, says Boehne. “We really have to be more consumer-driven than we have been in the past — a radical turn for media. It’s exciting, but not for the faint of heart.”

Chief Operating Officer Adam Symson, who has been a key player in the planning and execution of the digital strategy, shares Boehne’s enthusiasm, but doesn’t see it as quite so radical.

“Our move into podcasting is actually incredibly consistent with the history of this company always looking at where the media consumer is and then either building or buying a stake on that platform,” says Symson, who will become CEO later this year when Boehne relinquishes that title and becomes chairman only (see related story).

Craig Huber, a media analyst at Huber Research, is among the skeptics.

“Historically, when the company has moved away from its core competency, primarily television stations, it has stubbed its toe,” he says. “I’m not going to say they’ve stubbed it here, but they certainly have yet to prove themselves on an economic basis.”

“History is not on their side,” concurs analyst Barry Lucas. He says he understands Scripps needs to pursue audiences and advertisers by diversifying. But, he adds, they have only about two years to start seeing some meaningful profitability before investors start to lose patience.

Boehne hears the criticism firsthand. “It’s tough for investors to understand pieces of a story that are uncommon to the whole,” he says, adding that the long game matters little to Wall Street. “But if you have a long-term vision and you’re committed to it, you’ve gotta hang in there.”

Investors should take comfort that Scripps remains first and foremost a broadcasting company with fairly predictable revenue and high margins. Broadcasting is, Boehne likes to say, the “best business that God ever created.”

It currently operates 33 TV stations in 24 markets along with 37 radio stations. Those numbers include the stations that Scripps acquired in 2015 when it essentially swapped its newspapers for Journal Communications’ broadcast properties.

That deal, part merger and part spinoff, not only expanded its TV coverage to a robust 19% of U.S. TV homes, but eliminated the financial drag of the newspapers.

For the Scripps TV stations, 2016 wasn’t the year it had anticipated, with political advertising coming up far short and depressing overall revenue and earnings.

But Brian Lawlor, VP of television, sees 2016 as an anomalous political year and doesn’t believe that there has been a permanent shift of political dollars to other media. “At the end of the day, it really depends on are you in the places where there are competitive races — so it’s about your footprint.”

Without the political dollars, such as they were, Scripps, like most station groups, will likely see spot revenue shrink in 2017. But until the political business returns in 2018, Lawlor believes he can keep the core spot revenue growing by continuing to focus on local accounts.

“Seventy percent of our spot advertising comes from local,” he says. “That’s our local sales force serving local clients, banging on doors, developing new business. We have a huge focus on developing business.”

The stations have two other sources of revenue — local digital (station websites and apps) and retransmission consent. Both are growing faster than digital, but contribute far less to total company revenue.

The local digital revenue has been growing at a double-digit pace. “I think that’s going to continue for as long as we can see. It’s really important that we as broadcasters recognize that our brands are not just television, our brands are serving our people wherever they are, whatever they’re doing.”

Lawlor says that net retrans (retransmission consent revenue minus reverse comp payments) is growing by at least 7% a year — the growth rate that Wells Fargo securities analysts estimate for the entire industry.

Lawlor points out that the station group was late in collecting retrans fees because until the spinoff of the cable networks in 2008 the company used its retrans rights to get clearances for the networks. As those deals have gradually expired over the past several years, Scripps has cut new deals calling for cash payments from the MVPDs.

Scripps is also looking at syndication, to both lower programming costs for its stations and possibly sell the shows to other station groups. Just this week at NATPE in Miami Beach, Scripps was pitching Ben & Kellie, a daytime talk show with country music star and reality-TV personality Kellie Pickler and WNBC features reporter Ben Aaron.

At the forefront of the digital revolution is Newsy, which it bought for $35 million in 2014.

Newsy doesn’t cross-pollinate with any of Scripps’ broadcast stations and the company’s leadership says it doesn’t plan to, but it is a significant foray into a new format

Stories are produced as snackable (and socially shareable) segments so they can be offered to mobile consumers on demand, one at a time.

The segments can also be stacked into a linear program, says Newsy General Manager Blake Sabatinelli. “It’s kind of a backwards business model for us, but it works really effectively because it allows us to keep costs much lower.”

Sabatinelli says that linear engagement is growing. “When we’re putting together an hour of linear content, people are watching damned near the entire hour.”

Scripps has been successful in licensing the service to various OTT platforms.

“When we do a deal with Comcast, Pluto TV or Sling TV, these are real carriage agreements that have real obligations on both sides of the house,” Boehne says.

“They’re not interested in creating a zone of complete content democracy. They have a very defined, premium experience they’re going after.”

Newsy is looking to increase its staff from 76 full- and part-timers again in 2017, building on bureaus it has opened in Washington and Chicago. And Sabatinelli says it will continue to court younger viewers with a voice and vantage point that distinguishes it from similarly oriented — and larger — competitors like Vox, Mic and Vice.

“Our motto is point the camera in the opposite direction of everyone else and you’ll find a story that you’re looking for,” he says.

Meanwhile, Cracked, a humor brand dating back to 1958 that Scripps bought in 2016 for $39 million, is also targeting 18-34-year-olds in a video-centric push. Prior to the acquisition, the brand had hosted such content solely on YouTube, but now it’s taking advantage of sister company Newsy to ease the path for carriage agreements on other platforms (Roku, Pluto TV and Zumo are among the first).

“Scripps is really enabling us to pursue carving out a space for ourselves in the OTT landscape,” says Mandy Ng, Cracked’s GM.

Cracked’s revenue derives completely from advertising, but that includes in-house branded content that’s produced by a staff of 40.

When Scripps acquired podcast producer and distributor Midroll in 2015, it opened up yet another front in its campaign to win new audiences. Symson says the company has already exceeded internal revenue expectations and is drawing larger and larger brand advertisers, including NBC, Coors, Exxon, Wendy’s and Chipotle in recent quarters.

“The ecosystem has evolved and the marketplace has matured in a manner that [made] big-brand advertisers recognize that they want to reach the podcasting audience,” he says.

Midroll CEO Erik Diehn says that inadequate metrics, seen by some marketers as an impediment to growth in the space, haven’t been a problem for its profitability. Standardization, he says, is on the horizon.

And so is growth in what might seem an unlikely area given the proliferation of free podcasts — subscriptions, he says. “There are now more ads on podcasts, so the value proposition for ad-free is greater,” Diehn says, noting that an ad-free environment is also conducive to more scripted series, which tend to have higher production values.

Scripps’ acquisition of podcast tech company Stitcher for $4.5 million in cash in June 2016 opened up even more room for growth. Midroll works with about 250 shows, but Stitcher, the industry’s distant second-largest listening platform behind Apple, works with tens of thousands, Diehn says.

“The scope of our relationship expands from just the limited set of partners that we distribute and monetize for to a broader set of the podcast ecosystem,” he says.

Scripps’ in-house Digital Solutions Group is still exploring new businesses of its own. It has recently launched Simplemost, a social-oriented lifestyle brand, and it’s looking into 360 video, augmented reality and virtual reality prospects there, too.

Lawlor says the company is committed to producing some of its own TV programming in the hopes that it will be strong enough to syndicate among other groups. So far, the effort has yielded Right This Minute (produced in partnership with Cox and Raycom), The Now and The List.

Lawlor says there are two more shows in the pipeline for potential 2017 release. One in particular is a “big-vision investment” with outside partners and “highly-recognized talent” that would launch with national distribution.

Boehne is enthusiastic for ATSC 3.0, which he calls “an industry-defining moment” that’s rightly focused on the consumer’s experience, and needs to come together as quickly as possible. He says industry leaders must work closely together on not just the technicalities, but the consumer navigation proposition as well.

And Scripps isn’t done shopping for enterprises that can expand its footprint and earnings. “We intend to be around for the next 140 years,” Symson says.

The monetization path, he says, will be through premium subscriptions, advertising “or business models that we don’t even know of yet.”

The incoming CEO says a willingness to embrace the unknown accounts in part for his own promotion, and it powers the company’s momentum forward.

“Given the environment we’re all operating in, given what we know is ahead for the broader media industry, if you want to be in this business for the long haul you have to be smart and risk tolerant.”

This story originally appeared in TVNewsCheck’s Executive Outlook, a print publication devoted to the future of broadcasting. Read the other stories in the Winter 2017 issue here. Subscribe here.