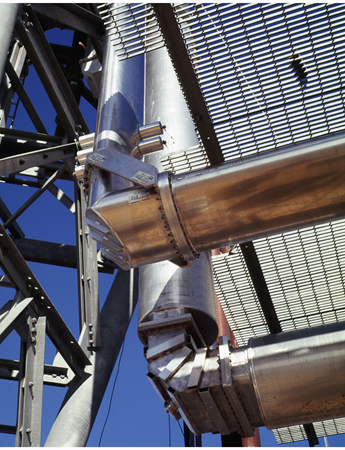 Broadcasters and tower owners preparing for the move of roughly 1,000 stations to new channel assignments will want to do more than simply replace equipment. They will seek to improve upon it. Stations sharing a UHF antenna are likely to find that elliptical waveguide tech, with its power-handling, broadband and wind-loading benefits, will become an important part of a successful TV spectrum repack and rollout of ATSC 3.0.

Television broadcasters and vertical real estate owners preparing to move what may prove to be more than 1,000 TV stations to new channel assignments will be looking for ways to minimize weight and wind loading of transmission lines; limit future maintenance requirements; and best use tower space at sites where multiple stations share a UHF antenna. Many will consider an option currently not widely used in television: elliptical waveguide technology.

“Like other waveguide, it can handle enormous average power and peaks,” he says, “plus a cross-section of an elliptical waveguide far outperforms that of a rectangular waveguide as far as wind loading is concerned.”

A cross-section of elliptical waveguide is similar in terms of wind loading to circular waveguide, which is often chosen for channel-specific applications, says Myat President Phil Cindrich.

Elliptical waveguide has a long track record in RF applications, such as satellite, cellular and point-to-point microwave transmission, but is a relative newcomer to TV.

“He started running some simulations on it, and sure enough it gave us tremendous bandwidth and the minimal losses we were looking for, so we went with it,” says Cindrich.

Aves, who is now retired, and Kolvek worked hand in hand to develop the product. Unfortunately for Myat, by the time it was ready to begin manufacturing its new EWG1600 elliptical waveguide, the DTV build-out in support of the analog-to-digital TV transition was nearing completion.

“We were only able to sell two of those systems into that market,” says Kolvek.

However, with as many as 1,200 TV stations in the United States likely to be assigned new channels — many of which will operate from combined antennas — Myat has a second chance at the brass ring.

“Our new EWG1800 was designed to take care of channels 14 to 52, the core spectrum before the repack,” he says. “So, given the repack and the UHF channels left, this one waveguide will cover the entire band, which is 14 to 36.”

TV engineers looking for examples of how the EWG1800 might perform can consider a shared broadcast tower in Houston where a broadband antenna installation for two independent stations used an earlier incarnation of Myat’s elliptical waveguide, the EWG1600. Like the newer EWG1800, the EWG1600 is made from aluminum and is able to handle very high power, says Kolvek.

During the analog-to-digital transition, it was common for stations to simulcast their analog channel as a digital signal on a separate DTV channel. The shared waveguide and antenna system for the Houston project initially transmitted an analog channel 55 at 5 MW ERP, a digital channel 42 at 1 MW ERP and a digital channel 52, later relocated to channel 47, at 1 MW, says Andrew Bricknell, director of engineering for the University of Houston.

At the time of the installation, Bricknell was a technical sales and project manager for RFS Broadcast, which supplied the antenna and played a significant role in the design of the system.

In such a high-power environment, it’s easy to understand that moisture finding its way inside of waveguide is a problem. Not only can moisture lead to an electrical short, but it can also promote corrosion, the need for costly maintenance and, potentially, system failure.

Such distortion causes the waveguide to begin losing its electrical RF performance, resulting in tuning variations on the line, he adds.

The shape of Myat’s EWG1800 elliptical waveguide will not distort up to 6 psi of pressurization.

“When you have a whole bunch of flanges in a rigid line that could be 1,900 feet long in a run, you have lots of secret points of failure,” says Bricknell.

If many flanges leak and there is only ¼ psi of pressurization to repel moisture, it’s hard to prevent rain and melting snow and ice from leaking into the waveguide. But with up to 6 psi there is more pressure to keep the water out, he says.

In warm climates like Houston, even the slight difference in the temperature between nighttime and morning can cause atmospheric pressure variations, which the elliptical waveguide never failed to handle, says Bricknell.

Planning For The Future
As broadcasters firm up their plans for transmission sites in the wake of the FCC’s spectrum repack, many will choose to lease antenna apertures on the same tower.

“The elliptical cross-section takes up less real estate than the rectangular with a round shroud on it, a novel solution used to reduce wind load,” he says.

Even in 2007, the amount of space available on the tower played into the decision to use EWG1600 elliptical waveguide on the Houston tower, says Bricknell.

“We had a very small space inside the tower because there were existing high-power UHF channels on that tower,” he says. “We had to fit our waveguide into the amount of space you’d use for an eight-inch or nine-inch line.”

“When you look at the size of elliptical waveguide — as far as fitting into the triangular section of a tower — it has a lot lower profile than other waveguide alternatives,” he says.

Just beyond the immediate priority of the TV spectrum repack is next-gen TV broadcasting based on the ATSC 3.0 standard.

Even before the 39 months the FCC has given broadcasters to complete the repack is up, the agency is likely to authorize broadcasters to begin ATSC 3.0 transmission on a voluntary basis.

While the $1.75 billion set aside by Congress to reimburse broadcasters for their channel relocation will only cover reasonable costs to replicate existing facilities to deliver service on their new channels, it still makes sense to plan for next-gen TV service while preparing for the repack, says Kolvek.

“Because ATSC 3.0 operates at a higher peak-to-average power ratio, many antennas and transmission lines must be up-sized to meet the demand for increased voltage capacity,” he says.

As a consequence, the added weight and wind load may be challenging for existing towers. However, at least when it comes to the weight and wind loading of transmission line, elliptical waveguide provides a lightweight solution with optimal wind loading characteristics that will make the buildout in support of ATSC 3.0 services far easier to bear, he says.