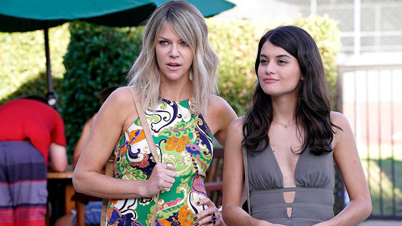 The watchdog group says this Tuesday's episode of the Fox sitcom, which centered on 17-year-old Sabrina and her desire to get breast implants, included graphic sexual dialogue and double-entendres.

The Parents Television Council is calling on citizens to file FCC broadcast indecency complaints regarding this week’s episode of Fox Broadcasting’s The Mick, which aired on April 25 at 8:30 p.m. ET/7:30 CT.

The episode centered on a teenage child, 17-year-old Sabrina, and her desire to get breast implants. The minor tells her guardian that “…you’re working the room like you’re mayor of tit town.” PTC said that “not only was an indecent word used in a sexual context, but the dialogue was delivered by a minor. Furthermore, the entire episode included graphic sexual dialogue and double-entendres, yet it was rated by Fox as appropriate for viewing by children as young as 14 years old.” [To view some of these scenes, watch here.]

“You’d think that the network programmers and broadcast standards staffs at Fox, the media company facing tremendous public criticism over allegations of sexual harassment and misconduct, would avoid airing a broadcast TV sitcom that so blatantly sexualizes a 17-year-old girl. Beyond being grotesquely irresponsible, we believe the content violates the broadcast indecency law,” said PTC President Tim Winter.

“George Carlin’s infamous comedy routine about the seven words you can’t say on television is still an unofficial guideline the FCC uses to determine whether language is in violation of federal indecency laws,” Winter continued. “At times of the day when children are likely to be watching broadcast TV, ‘tit’ is one of those words. If Fox wanted to air this program just as it was produced, it could have done so after 10pm or it could have moved the show to one of the several cable networks it owns.

“The industry’s tedious excuse that concerned parents could have used the V-chip to block the show doesn’t work here. The network rated the show TV-14, suggesting to parents that the program content was appropriate for children despite that the entire show focused on a teenage girl’s breasts.

“We urge the FCC to act and to help families protect their children from indecent content, just as the Congress has instructed and just as Chairman Ajit Pai has pledged. As long as Fox is licensing and profiting from the use of a public resource – the broadcast airwaves – they must abide by the law,” Winter added.

It has been over two years since the PTC last filed a formal indecency complaint with the FCC. PTC said that filing “was in February 2015 regarding an episode of Fox’s Family Guy and, to the best of PTC’s knowledge, the complaint was never adjudicated.”

I wish you did not give such prominence to complaints such as this from PTC. It’s not a mainstream organization that has views that are outside the mainstream and take a more restrictive position on the indecency regulations that current law provides. It has every right to espouse its views, but that doesn’t mean you have to give them additional publicity. If a large number of complaints are filed against the program that might rise to newsworthy, including whether such complaints are an organized campaign by a group like PTC rather than arising individually among viewers.

And they are not a censorship group, nor are they liars and bullies, and the president knows about the indecency laws. I’d wish people would stop crying censorship/bully everytime the PTC criticizes something!

@Mac Really? The President who used a vulgar term to describe women to Billy Bush? I’ll stop right here because I am not wasting my time arguing with a nutjob.

1) The Mick has never been worth watching to begin with.
2) Both the PTC and PETA need to leave us alone and let us make our our decisions.

The PTC is not making your own decisions, besides, unfunny garbage like The Mick doesn’t have any right to exist, so nothing of value will be lost if this show is cancelled, and nobody will care, not even me.

The Mick was picked up for a second season. Hopefully, they’ll trot out a few more words to make the PTC lose their shit. Like “shit”.

They are not a censorship group, liars, nor bullies, now stop it and leave them alone! I’ll keep saying that until you do!

You don’t have a firm grasp of what “censorship” means, do you? For that matter, you don’t seem to a grip on reality…

Wow, this thread needs to be rated TV14.