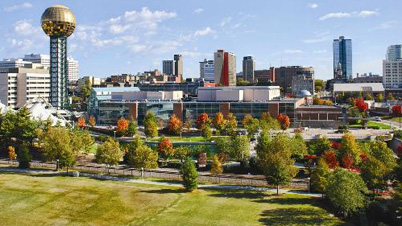 Tegna’s NBC affil WBIR holds a towering lead over its local competitors on social media in Knoxville, Tenn. according to Shareablee data. Being a go-to platform during the market’s devastating wildfires was one factor that put it there.

Among local media on social in Knoxville, Tenn. (DMA 62), there’s WBIR and then there’s everyone else.

That’s the picture that emerges out of data from audience insight firm Shareablee as to social media action in the market over the last six months. The Tegna-owned NBC affiliate had more than 6.1 million total social actions in that period, 39% of the DMA’s total 15.6 million total actions. Next closest in total actions was WIMZ-FM with almost 2.9 million actions.

Even though it trounces its local TV competition, WIMZ-FM bests WBIR in overall fans/followers. The radio station had over 668,000 in that period compared to WBIR’s 642,000.

On individual platforms, however, WBIR took the trifecta of Facebook, Twitter and Instagram.
Local calamity is partly behind WBIR’s social performance. In November 2016, devastating wildfires struck the heart of Gatlinburg and Sevier County. The fires escalated from concerning to life-threatening quickly, and that’s where WBIR and its social channels stepped in.

“The night the fires broke out, communication was down in terms of response groups,” Kara McFarland, WBIR’s director of marketing and community relations, explains. Cell phone coverage was also hampered, leading many viewers to reach out to WBIR via Facebook Messenger to relay what they were seeing and calls for help.

“Social media truly drove the Gatlinburg wildfires story,” McFarland says. “This started what would be several days of nonstop coverage on the air and Facebook Live.”

The station added 53,000 likes in the week following the start of the fires, buoyed by dramatic, raw video from the unfolding disaster and a hashtag, #SmokiesStrong, that galvanized viewers as they survived and then recovered from the events.

As a Tegna station, WBIR’s newsroom is armed with tools including ChartBeat, CrowdTangle and Omniture to wrangle social data, and morning news meetings begin with an assessment of performance there.

“We start off by looking at yesterday’s top social posts and we learn from that,” McFarland says.

That data helps the station piggyback on nationally viral stories such as April the giraffe. Local viewers were so enamored of that story that they created their own page for it, but WBIR also layered in its own “Peek-A-Zoo” effort to celebrate a new tiger forest at the Knoxville Zoo. That featured a live stream from a different animal enclosure every hour on the hour for a week.

WBIR has rallied around the slogan/motto “Straight from the Heart” for 30 years, and McFarland says that helps govern its approach to Facebook. Live streams are almost daily (and often more), but rather than streaming newscasts, for example, the station looks for behind-the-scenes and humanizing approaches.

One such recent effort helped introduce new reporter Raishad Hardnett to viewers. The new arrival to Knoxville had never been on a rollercoaster in his life, so WBIR put him on what local park Dollywood bills as the world’s fastest wooden rollercoaster.

“His facial expressions were just to die for,” McFarland says.

On the light fare side, WBIR has also experimented with several 360-degree videos on Facebook, including one looking at Tennessee’s largest house.

A more serious social video, created to commemorate the passing of Pat Summit, the former head coach of the University of Tennessee’s Lady Vols, had 8.7 million video views, nearly 120,000 shares, 5,000 comments, and 79,000 interactions.

For WBIR, those strong responses indicated how indispensible social has become as a viewer engagement platform.

“Our social media platforms give our viewers a greater understanding of the issues that affect them, even if they never go to our website or watch us on TV,” McFarland says.