Back to TVNewsCheck Home Print this page
TVB FORWARD 2017 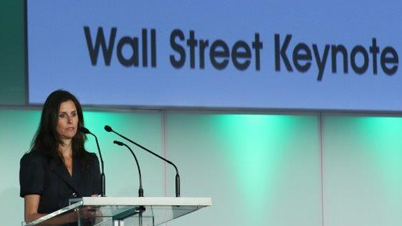 Wells Fargo analyst Marci Ryvicker sees station groups’ core advertising, which excludes political, growing 2% next year. In addition, she says broadcast stocks are also likely to get a boost from the FCC's easing of the media ownership restrictions that will lead to further consolidation of the industry.

Local broadcast stocks have experienced a lot of volatility over the past year, but they should stabilize in 2018 and outperform not only other sectors of the media, but the general market, says Marci Ryvicker, media securities analyst at Wells Fargo.

In a presentation today at the TVB Foward Conference in New York, Ryicker said the stocks led by Nexstar, Sinclair and Gray will benefit from the surge of advertising from heavy TV electioneering and around the Olympics on NBC.

More bullish than most, she said that core advertising, which excludes political, would grow 2% next year. She offered no forecast on total spot growth.

The broadcast stocks are also likely to get a boost from the FCC’s easing of the media ownership restrictions that will lead to further consolidation of the industry.

The recent volatility has been do with forces beyond control of broadcasters and to a misunderstanding of industry trends, Ryvicker said.

Yes, spot sales are soft, but it’s becoming a smaller and smaller part of the industry’s revenue pie, she said. What’s getting bigger is net retrans (retransmission consent revenue less reverse comp), and there the news is good.

According to Ryvicker, network-affiliate relations that reflect net retrans are generally good and “the overhang” caused by Fox’s negative reaction to the pending Sinclair-Tribune deal will go away later this year or early next when the deal closes.

So concerned has Fox been about the Sinclair-Tribune merger that it made a last-minute effort to outbid Sinclair for the Tribune stations. It has also been rumored that Fox might buy Ion Media and use that station group to bypass Sinclair’s many Fox affiliates.

CBS jolted investors last year when it suggested that it that it wanted two-thirds of its affiliates’ retrans dollars, Ryvicker said. That’s a hefty share, given that affiliates and their networks are now more or less equally sharing the dollars now.

Ryvicker also said broadcast stocks have also suffered because they get lumped in with other TV media sectors. When the MVPDs report declines in subscribership, investors tend to punish the broadcast stocks as well.

In fact, Ryvicker said, many of the lost MVPDs subscribers are being replaced by subscribers to vMVPDs — OTT streaming services like AT&T DirecTV Now and Sony’s PlayStation Vue — and network affiliate TV stations are must-haves on such services.

“OTT is going to be very good for the must-haves and broadcasting is one of them.”

This year, broadcast stocks have been hurt because the economic boom and tax reform that was to have followed Trump’s election failed to materialize, she said, noting the close linkage between between advertising and the GNP.

The auto industry is experiencing a slowdown this year, Rybicker said. And, in the minds of many investors, auto advertising is closely tied to how many cars are actually being sold, she said.

Another plus for broadcasters will be the rollout of the new TV transmission standard ATSC 3.0 over the next few years, Ryvicker said.

Investors are not giving stocks any credit for it because it doesn’t yet generate any revenue or cash, she said. But they will learn, she said. “The way I describe it to investors is we have a really cool potential opportunity that we can’t quantify yet, but should provide a substantial amount of upside.”

why doesn’t CBS just go ahead and demand all of their affiliates retrans money. ?

Don’t you think that CBS needs its affiliates. They couldnt be a network without them and only there prime makes them valuable to the affiliates, once ratings go down why does the affiliate need them ? two way street

Wizerk..I Agree… they really don’t need each other any longer..The model is broken and just a matter of time

…Although this could have something to do with the penetration rate of broadcast (nearly 100%) versus the NFL Network (which is ??? most assuredly infinitely smaller).

Insider..Dont tell me you believe the ratings are right… do you??? You are truly living in the past….

The networks are licking their chops to stream as much of their content as possible, since that’s where younger audiences are viewing now. And in the face of cord cutting, who thinks that the cable operators have bottomless pockets to pay retrans fees??? Those deals are revenue per sub, so guess what happens when subs really begin to fall off…