Back to TVNewsCheck Home Print this page
NATPE 2018 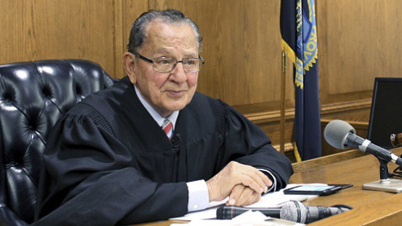 Once again, the new first-run offerings are slim as stations are mostly content with what’s working for them. The big question is whether Harry will be back for a third season. While some syndicators have new entries for sale, only one new show has so far found a station launch group (Fox) that virtually assures its debut this fall. That is Debmar-Mercury’s new court show Caught in Providence (AP photo/Michelle R. Smith).

The first-run syndication is heading for another rerun season at NATPE, the annual convention for TV programmers that gets underway tomorrow at the neighboring hotels of the Fontainebleau and Eden Roc in Miami Beach.

“This will be the second NATPE in a row where there are very limited rollouts of new shows that are coming,” says Bob Sullivan, SVP of programming for the Tegna TV station group.

“People are holding on to what’s working,” says Sean Compton, president of strategic programming and acquisitions for Tribune Media. “The failure rate [for new shows] seems like it’s even higher than 95%.”

At the heart of the market malaise are the Big 3 network affiliates. They are more or less satisfied with their syndicated offering, mostly long-running franchises like Judge Judy, Dr. Phil and Ellen. And some are eschewing syndicated shows for news and other programming they produce themselves.

So, for the most part, they simply are not buying.

More active in the market are Fox, CW and MNT affiliates that get little or no help from their networks in daytime, prime access or latenight. They always have holes to fill and a willingness to upgrade.

The big question hanging over the market is Harry.

If distributor NBCU pulls the plug on the Harry Connick Jr. talk-variety hour, which is slogging through its second season, an hour will open up on the Fox stations and some Big 3 affiliates.

Most believe the show will go away, but there has been no word from either NBCU or Fox, which because it carries the show in the major markets has much to say about its fate.

Going into NATPE, only one show has found a station launch group (Fox) that virtually assures its debut this fall. That is Debmar-Mercury’s new court show Caught in Providence.

The show features 80-year-old Frank Caprio, the chief judge of the Providence, R.I., Municipal Court. It is to be taped in an actual Providence courtroom.

Ira Bernstein, co-president of Lionsgate-owned Debmar-Mercury, says he is realistic about the show’s prospects.

“We get what this show is. It may run in access, it may run in prime. It is clearly a utility show that is going to have to prove itself. I like to think it is mostly going to run coming out of another court show.”

Another offering for this fall was announced at noon ET today — The Investigation Discovery (ID) cable network’s hour-long True Crime Files will premiere in fall 2018 airing on the Tribune Broadcasting stations and the Sinclair Broadcast Group stations along with other stations and has already been sold in 60% of the U.S.

Sony says it will unveil a new show this week, but is not saying anything about it. Sources say it is Police Patrol, a reality show similar to Cops.

CBS Distribution Television is offering Face the Truth, a conflict show hosted by actress Vivica A. Fox. CBS declined to comment on the show, but some see it has a replacement for the syndicators’ long-running The Doctors.

“We set out to find a compelling alternative to sitcoms that can play in multiple dayparts and repeat effectively” says Warner Bros.’ Werner.

Broadcasters have been “impressed” by the show, recognizing that it is “elevated, humorous, compelling and different,” he says. “The question stations asked was whether they can afford it. It’s not a cheap show.”

There has been a lot of talk about whether Tribune Media will renew the three NBCU-distributed conflict shows that have been among its daytime staples for years — Maury, Jerry Springer and The Steve Wilkos Show.

Tribune’s Compton would say only that “we already have a plan in our heads; Tribune knows what it is doing next fall.”

As Compton well knows, decisions about Tribune’s schedule are not Tribune’s alone anymore. The station groups in the process of being sold to Sinclair Broadcast Group, which certainly has its own ideas about the stations’ daytime programming.

According to one, if Tribune renews all three of the NBCU conflict shows, The Squad may take over the afternoon network slot on The CW now occupied by The Robert Irvine Show.

Besides the reluctance to let go of steady, if not spectacular, ratings performers, station groups with Big 3 affiliates have been filling gaps in their schedules with home-grown programming, further limiting opportunities for outside producers and distributors.

TV stations continue to extend news content in mornings and afternoons, says Stacey Shulman, EVP of strategy and analytics for Katz Media Group. “We have seen more hours of news content that does impinge on the non-news programming. It’s very efficient and profitable.”

And a few groups are producing entertainment programming. Tegna, for example, last year started up Daily Blast Live (in 36 markets); Sister Circle (WXIA Atlanta as well as local cable); and Sing Like a Star (a weekly show in 33 markets).

“Our goal is not to supplant syndication programming but to enhance the offering for our stations,” says Tegna’s Sullivan. “We went from being buyers only to being buyers and sellers…. We can’t wait around for the studios to come up with something.”

For all the “woe-is-me,” Debmar-Mercury’s Bernstein says he remains upbeat about syndication. “You are dealing with a TV station business that operates at a 40%-plus profit margin. They [primarily] need one thing: New programming that is going to work to keep that margin.

“We, as an industry [syndication], haven’t come up with anything great recently — a big show. We have to keep trying.”

Wondering when NATPE will cease to exist..????