An Alabama meteorologist used Facebook Live and satellite imagery to pinpoint weather information for viewers affected by Hurricane Michael. Because of his creative efforts to serve the viewers during a difficult time, Josh Johnson of WSFA has won the Social Media Excellence Awards’ top distinction — the Innovator Award.
By Jennifer Pallanich | November 30, 2018 | 5:54 a.m. ET. 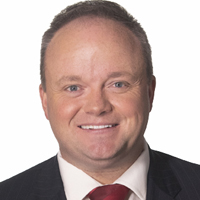 Using Facebook Live and satellite imagery, Josh Johnson, chief meteorologist at WSFA Montgomery, Ala. (DMA 116), was able to tell displaced evacuees whether it appeared Hurricane Michael damaged their homes. The combination earned him top honors in TVNewsCheck’s inaugural Social Media Excellence Awards. The award honors the most remarkable achievement on the platform by an individual, news brand or station group.

Television broadcasts can only provide information about general areas, so Johnson decided to combine Facebook Live and searchable online database of satellite imagery overlooking Hurricane Michael damage in order to provide granular information and serve evacuees displaced by the hurricane.

Johnson and fellow honorees will be presented with their awards on Dec. 10 at the New York Hilton, where they will also take part in a panel discussion with Kim Wilson, president and founder of Social News Desk, the presenting data partner for the awards.

“TV stations can throw the words service and serve around and not really comprehend that our main core mission is to serve others. This was a pretty cool way to do that,” Johnson said. Those who benefited from his innovative use of social media weren’t viewers of WSFA, so the Raycom Media-owned station didn’t get ratings credits from the event, but “we served a lot of people, and gave some peace of mind,” he said.

Johnson said he drew on his experience during Hurricane Katrina while he was at WTOK Meridian, Miss., to find a way to serve the viewers in a meaningful way.

“Our general manager did something I’ll never forget,” he said. “Our TV station was like the only place in town that had power and internet. We went on air and invited people to come in and mark themselves as safe.”

Evacuees lined up outside WTOK to take advantage of the offer, he said.

“This disaster, I was thinking about tangible ways we could serve people who have been displaced from their homes, and I thought back to that. This became the 2018 version of that,” he said. “I can’t imagine living at a hotel or in a spare bedroom in Alabama and wondering if everything you own has been blown to oblivion.”

The idea to combine aerial mapping with a Facebook Live event to help people learn the status of their homes came together quickly, and the station sandwiched the event between its 5 and 6 p.m. newscasts. The Facebook Live participants could submit the address they wanted to know about, and Johnson looked up the locations using aerial photography.

“People were so hungry for information,” said Morgan Carlson, digital content manager at WSFA. “It was hard for people to get information about what was happening there.”

“The aerial images that Josh was using in Facebook Live were one of the first ways my parents were able to see their house after the hurricane,” Carlson said. “Josh actually looked up my parents’ address and told me ahead of time” that there was minimal damage to their home.

In the future, he would allocate more time for such an event.

“We didn’t comprehend how much of a response it would get. We kept it going through the 6 o’ clock newscast. We could only talk to people during commercial breaks,” Johnson said.

The event generated 9,500 engagements, and 422 comments remained after addresses were removed to minimize the chance of looters identifying those addresses as potential targets.

Johnson estimates he was able to give good news to about three-quarters of the participants.

“In a lot of ways this hurricane was more like a tornado because of the sharp cutoff between catastrophic damage and minor damage.”

The event worked well, he said, but the display was “a little clunky.” When using the aerial mapping to show people their homes, the video got grainy in the process, he said.

Johnson typically uses Facebook Live before impactful weather, offering a briefing on the weather event and then opening the floor to questions.

“TV stations forecast weather for areas, but our viewers don’t live in areas. They live at home, they care about where they are,” he said. “No one can raise their hand on TV and ask, ‘what about my neighborhood?’ ” With Facebook Live, he says, “I can be specific about every area in town, each community.”

He prizes this form of social media for its ability to create a “genuine authentic connection” with viewers.

The station has given Johnson and his colleagues the latitude they need in social media to engage authentically.

“All of our talent have their own social media accounts,” Carlson said. “They manage it, but we give them best practices and work with them, providing content to use, sharing their posts and retweeting them.”

Johnson is “good at using technology,” Carlson added. “He doesn’t just use these things, he understands how the technology works. He is definitely innovative, coming up with new ideas.”