Jean Dietze, the retiring head of affiliate relations at NBC, has witnessed major changes in the network-affiliate relationship over the past 40-plus years. And she’s a big part of why that relationship continues to distinguish broadcasting, has survived rocky times and might just save the business.
By Harry A. Jessell | March 11, 2019 | 8:25 a.m. ET. 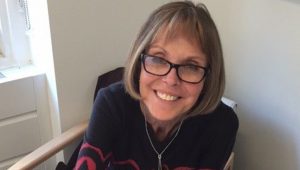 That TV broadcasting still prospers today, despite decades of unrelenting competition from cable and the internet, reflects the enduring value of the network-affiliate business partnership and the unique mix of national and local programming it enables.

Over the decades, no other TV medium has been able to duplicate its power and appeal.

I’ve been thinking about the importance of that partnership since learning of the retirement of Jean Dietze, the head of affiliate relations at NBC. Her story is the story of the partnership over the past half century.

Philip Martzolf stepped in as her replacement last Monday, but Dietze will be around for a while to help him make the transition from syndication sales at Sony Pictures Television. In any event, she tells me, she will be gone by the time of the NBC affiliates meeting in New York during the May upfront.

Dietze joined NBC in 1973 when TV broadcasting was at its absolute zenith. Cable was still in its infancy, no immediate threat to the Big Three oligopoly. The internet was little more than a computer-science experiment, decades away from any commercial application, let alone a transformative TV medium.

In the 1970s, affiliates often opted out of carrying individual shows so they could air, say, a baseball game, and the money flowed from network to affiliate.

Dietze was part of a group that continually checked in with affiliates to see what programs they were clearing. “They had a compensation rate and, if they carried the program they got paid, and, if they didn’t, then they didn’t get paid.”

Also, if an affiliate declined a show, NBC could shop it elsewhere in the market, she says. “We went across the street.  We would pitch programs to other stations in the market.”

Dietze remembers the panic at NBC in 1993 when Fox acquired the NFL football rights and started stealing affiliates through station acquisitions.

Neil Braun had just been named NBC president and he put together a team to replace lost affiliates and lock them up, Dietze recalls. “We would meet every day at 8 or 8:30 up on the executive floor and decide what we were going to do in terms of each market.

“We paid huge amounts of money. Every network did at that time to lock in the affiliations, and we wanted long-term deals.”

The affiliates never had it better, but those times did not last.

But by the late 1990s and early 2000, such long-term deals were a thing of the past and the networks were phasing out compensation as the competition bore down and margins shrunk.

And then in 2008, when Dietze became head of affiliate relations, it became her job to sell affiliates on the idea that they had to pay the network for renewals. It wasn’t easy.

The affiliates bucked at having to pay so-called reverse comp, essentially a big share of the newly won retrans dollars they were getting from cable and satellite.

Dietze says that period may have been a low point in the relationship. “That was difficult, but we worked with them on it and we talked with them about it. I mean nobody likes to pay something if they don’t have to. The affiliates were concerned that we would go to [direct to] cable.”

It didn’t help that at the same time NBC was making increasing demands for reverse comp, it was mucking up primetime.

Rather than see Jay Leno walk away after he “retired” from the Tonight Show in 2009, NBC allowed him to recreate a version of the show at 10 o’clock — the crucial local news lead-in. The affiliates howled as Leno failed to draw much of an audience at 10 and his successor at Tonight, Conan O’Brien, also stumbled in the ratings.

That botched experiment ended six months later with Leno moving back to Tonight and O’Brien fleeing to cable.

“That was a difficult time, but through it all, [the affiliates] stuck with us and that is because we kept them in the loop, we worked with them and facilitated it working in a way that didn’t really kill them.”

The affiliates have come to accept the new reality of reverse comp and the over the past decade relations have been marked by successful negotiations for sharing of revenue from TV Everywhere and OTT streaming bundles and primetime resurgence.

Contributing to the current era of goodwill has been Comcast, which acquired control of NBC in 2011. The cost-conscious prior owner, General Electric, had cut affiliate relations along with a lot of other units at the network.

“When Comcast came in, they restored affiliates and the owned stations to their rightful place in the world order,” Dietze says.

“Affiliate relations at NBC is a companywide effort. It really is. It starts at the top with Steve Burke and Mark Lazarus. The management is engaged. They are interested, collaborative and fair.”

The outline of the affiliate relations story is much the same at the other networks, but for the last decade — the reverse comp era — I would say things have generally gone more smoothly at NBC. That may be because of Burke and Lazarus as Dietze says or, as others say, it may be because Comcast-NBCU has been under close scrutiny by antitrust regulators since the merger.

I think it has a lot to do with Dietze herself. Over the years, she has earned the respect, trust and the genuine affection of those who have sat across the table from her. I’ve never heard a negative word about her, and it is easy to find admirers.

“We’ve obviously had a lot of issues over they years and you didn’t always hear what you wanted to hear from her, but she was always an honest broker,” says Tegna CEO Dave Lougee, the current chairman of the NBC affiliate board.

“She has just been a great communicator. She works hard to make sure that different parts of the network get the affiliates’ input on important issues.”

Dietze’s retirement has been in the works for several months. The top brass of NBCU, her NBC colleagues and many NBC affiliates turned out last November to honor her at a dinner in New York.

At its NAB breakfast next month, the Broadcasters Foundation of America, will present her with a Leadership Award.

That will be an opportunity for the industry to recognize her prominent role in maintaining the network-affiliate partnership that continues to distinguish broadcasting and just might save it.