Broadcasters To Unveil 3.0 Rollout In 30+ Markets

Spectrum Co. and Pearl TV are expected to jointly announce ATSC 3.0 launches involving some 150 stations in 30 markets during next week’s gathering in Las Vegas. Their goal is to build a national footprint that will let broadcasters better compete with wireless companies and OTT providers while spurring the development of 3.0-ready TV sets and other consumer devices.
By Glen Dickson | April 4, 2019 | 11:55 a.m. ET. 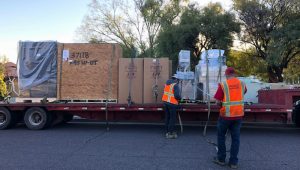 Comark transmitters and ERI antennas being delivered for the Phoenix SFN.

The NAB Show in Las Vegas next week will mark a big step in the progress of the ATSC 3.0 next-generation TV standard from technology concept to commercial reality as leading proponents will unveil plans for lighting up 3.0 stations in more than 30 markets.

“When you look at all broadcasters, there is no one company that can do it by themselves,” says Pearl TV Managing Director Anne Schelle. “So you’re going to see a collaborative effort, where we have the ability to collectively work as a group.”

Their goal is to build a national footprint that will let broadcasters better compete with wireless companies and OTT providers while spurring the development of 3.0-ready TV sets and other consumer devices.

The announcement, scheduled for next Monday (April 8), will be among a series of 3.0 presentations, press conferences, panel sessions and demonstrations, covering technical trials, single-frequency networks, audience measurement and 5G interfaces. More than 50 exhibitors will offer 3.0 products and services.

The cooperation envisioned by 3.0 proponents is already happening in Phoenix, which Pearl TV launched as its ATSC 3.0 “Model Market” just before NAB 2018 in partnership with NBC Universal, Fox and Univision.

The Model Market currently uses Univision’s KFPH to broadcast 3.0 services from five different stations, with KFPH’s ATSC 1.0 programming being hosted by other Univision, Tegna and Scripps stations in the market. Twelve stations in total are involved in project.

To insure continued service to viewers with 1.0 sets, at least one station in each market must serve as a host station, simulcasting in 1.0 the programming of the 3.0 stations.

The Model Market broadcasters plan to expand the trial this spring with the launch of a “second stick” that will support a new ATSC 3.0 single-frequency network (SFN), similar in concept to one already being operated in Dallas by Sinclair, Nexstar, Univision and American Tower Corp.

The SFN helps to insure robust blanket coverage of markets and should enable further testing of new 3.0 services, including mobile TV or extremely high-bit-rate transmissions such as multiple 4K streams.

The “prime node” for the new Phoenix SFN will be Nexstar’s KASW, which, like KFPH, has a high-powered transmitter feeding an antenna on South Mountain, Phoenix’s primary broadcast site located south of the city.

The three sites are Shaw Butte, located on the other side of the valley to the northeast of Phoenix; Gila Bend, a location southwest of South Mountain; and an undetermined site to the southeast of the city, says Pearl TV Chief Technology Officer Dave Folsom.

Nexstar and Fox will use the KASW stick to launch their own 3.0 broadcasts, while KASW’s existing programming will be hosted by Fox-owned stations KUTP and KSAZ.

Pearl TV and NAB will help manage the SFN, which will rely on towers from American Tower Corp., transmitters from Comark and GatesAir and antennas from ERI and Dielectric. Folsom hopes to get the main KASW transmitter and the Shaw Butte site running this month, with the other two SFN sites operational by June.

“Licensing will be the single longest pole in the tent,” he says. “We’re already getting equipment installed.”

The Phoenix Model Market is designed to be a testbed for a variety of 3.0 technology ranging from encoding equipment to consumer sets.

In addition to testing 3.0 services with consumers, the Phoenix partners have been working on a standardized measurement system for 3.0 that will take require an IP backchannel (such as a broadband connection to a smart TV). It promises to allow the same granularity of measurement as Web content providers.

The measurement project is being done in conjunction with five firms: Comscore, Kantar Media, Nielsen, Verance and Yotta Media Labs.

Comscore is working on metering technology; Kantar Media is testing the delivery and reception of its audio watermark, used by the TAXI (Trackable Asset Cross-Platform Identification) initiative; Nielsen is testing its watermarking and metering technology with nine stations; Verance is embedding its “Aspect” audio watermark, which can be delivered through any distribution path including legacy broadcast, cable and satellite, within all of the ATSC 3.0 streams; and Yotta Media is building an application framework, including digital rights management (DRM), to work on 3.0 smart TVs.

As an industry, broadcasters have been dealing for decades with panel-based measurement that is “largely dsyfunctional,” says Verance CTO Joe Winograd, and problems have only gotten worse with the recent explosion in digital outlets.

“When you’re dealing with a couple hundred households in each market, and you have more channels than measurement points, you’re dramatically  undersampling the data set,” notes Winograd. 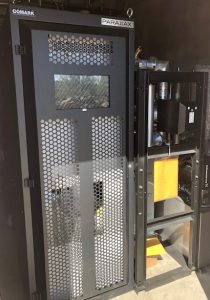 A Comark transmitter at the Phoenix SFN.

While broadcasters have responded by buying measurement based on Automatic Content Recognition (ACR) data from smart TVs, that approach also has its limitations.

Different set makers work with different third-party companies to cull the data, says Winograd, and there are no common standards and practices. But 3.0 can eliminate that problem and also make for a more competitive, innovative measurement marketplace.

“What ATSC 3.0 did is come up with a measurement model that’s on par with what the digital platforms have, and an open specification that anybody can build to,” says Winograd.

“So a broadcaster can choose who the measurement company is going to be, put the URL of that company’s server into their broadcast service, and it tells every device to connect with this service for measurement data collection.”

More good news on 3.0 measurement came out of Cleveland this week, where the NAB announced that Nielsen’s audience measurement watermark was successfully transmitted by the NAB/Consumer Technology Association (CTA) 3.0 test station at Tribune’s WJW.

In Las Vegas, NAB will be working with a number of technology vendors to run its own 3.0 SFN through the North Hall and Central Lobby of the Las Vegas Convention Center.

The system will comprise four low-power transmitters, with viewing kiosks in the LVCC lobby, the NAB Pilot North Hall exhibit and the ATSC-CTA-NAB “Ride the Road” exhibit, also in the North Hall.

Comark provided two of the exciters for the convention floor SFN, says Comark CEO Dick Fiore, with the others coming from another vendor. That should provide a good proof of concept for how well the 3.0 standard is currently working, he says.

“There should not be any issues,” says Fiore. “We’ve had a number of different plugfests, to make sure all the equipment is interoperable. In the beginning it was a struggle, but we’ve all gotten a lot smarter. The test at NAB will demonstrate how smart we’ve gotten.”

There has been no bigger proponent of ATSC 3.0 than Sinclair Broadcast Group, and its executives will have a large presence at the show in various 3.0-related press conferences, sessions and exhibits.

The station group has even brought its own 3.0 transmission facility to the show, a “transmitter on wheels” that will be broadcasting live outside the North Hall. The towable trailer is equipped with a 5 kW transmitter, 70-foot deployable mast, generator and an “entire broadcast chain” of equipment, says Sinclair VP of Advanced Technology Mark Aitken.

“The idea is to have something to bring to large venues, to demonstrate ATSC 3.0 to the broader public,” he says.

Sinclair has been a big proponent of using 3.0 to deliver new services outside traditional TV, such as mobile services and datacasting. The company, which was intimately involved in developing the transmission aspects of the standard through its ONE Media 3.0 subsidiary, has also been working with Indian chip maker Saankhya Labs and South Korean wireless operator SK Telecom to spread 3.0 internationally.

Perhaps not surprisingly, Aitken and other Sinclair executives will be spending a significant amount of time at NAB 2019, both on the show floor and in hotel suites, discussing and demonstrating how 3.0 can be used in conjunction with the other new wireless technology on the block: 5G.

“There are lots of underlying reasons the ATSC 3.0 standard can be perfectly aligned with the 5G standard, and we know this because we own a whole lot of IPR [intellectual property rights] at the physical layer,” says Aitken, who also serves as president of ONE Media 3.0. “We designed this thing.”

Aitken has been working with several telecom companies in India on using the 3.0 broadcast standard in conjunction with traditional unicast paths to offload traffic during high-volume streaming events such as live sports. For example, in India during professional cricket matches there can be as many as 200 million users simultaneously attempting to stream the action.

“There’s an ability at the core of the network to divert traffic to the broadcast channel,” says Aitken. “That could be data files, it could be anything you want it to be. But the first use case for all telecoms is live events — they crush the networks.”

Saankhya Labs demonstrated this “5G broadcast” solution at the Mobile World Congress in Barcelona in February, using a small USB dongle with a smartphone, and will also be showing it at the Wynn hotel in Las Vegas next week.

Aitken says the same hybrid ATSC 3.0/5G system can be seen in several booths on the show floor, and he will be pitching it during several sessions at the show.

“As a TV broadcaster, we are not limiting our view of the business propositions to simply TV content,” says Aitken. “When you put broadcast and unicast together in a converged environment, you have a positive multiplier on the consumer experience.”

Would be nice to let viewers reply data back to the stations in real time with input about shows likes/dislikes and future enhancements.

I personally would like to see 3.0 incorporaste the tv audio to various HD radio station sub channels so viewers can tune into their favorite programs audio in their autos when they are not able to watch a particular show while on the road.