The still unnamed country music service — comprising a broadcast diginet and an OTT streaming platform — will operate from offices and production facilities in Nashville. Drew Riefenberger has been tapped to head the joint venture as general manager. The OTT version, a mix of linear and on-demand programming, will not simulcast the multicast version, although there will be some overlap.
By Harry A. Jessell | April 24, 2019 | 8:30 a.m. ET. 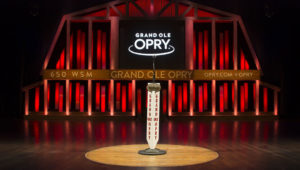 What this country needs is more country.

Or, so Gray Television believes. The station group is teaming with the owner of the venerable Grand Ole Opry to create a new TV service of “artist-driven country lifestyle programming.”

And in keeping with modern media times, the service will be available as a broadcast diginet and via an OTT streaming platform.

Gray’s partner in the 50-50 joint venture is Opry Entertainment Group (OEG), a subsidiary of Ryman Hospitality Properties, owner of the Grand Ole Opry, the weekly country music show; the Ryman Auditorium in Nashville, the original and still part-time home of Opry; and WSM-AM Nashville, which has broadcast the Opry since the 1920s. The Opry’s assets include a deep archive of performances by country artists.

The still unnamed service will operate from offices and production facilities in Nashville. Drew Riefenberger has been tapped to head the joint venture as general manager.

“OEG is right in the center of country music,” said Gray Co-CEO Pat LaPlatney in an interview prior to this morning’s announcement of the deal. “They are at sort of the epicenter of the country lifestyle and we believe that we could not have a better partner in this in terms of a company not only to do the performance archive, but also to create originals around the artists and the potential live music down the road.”

For its part, he said, Gray will contribute “distribution and marketing capabilities and an understanding of the multicast world.”

LaPlatney did not say how much money the partners are investing in the venture.

Colin Reed, CEO of Ryman Hospitality, which also owns hotels and resorts with more than 8,000 rooms, including The Inn at Opryland in Nashville, said in a prepared statement that the Opry has brought together country music fans for 93 years.

“This partnership with Gray is the next step in the continued evolution of the company’s position as a country music discovery point for fans. Its distribution network closely aligns with our fan base and will allow us to quickly scale our delivery of existing and original artist-centered content to help reach the 110 million country music fans in the U.S.”

The venture’s stiffest competition will be Viacom’s CMT, a cable network whose country music roots go back to 1983. For the most part, it has retained much of its country flavor, although it has strayed into reality shows like Dallas Cowboy Cheerleaders: Making the Team and sitcoms like Last Man Standing.

“If you look at the programming schedule on CMT, ours is going to be all country, all the time, but I am not sure theirs is,” said LaPlatney. “I am not casting aspersions on what those guys are doing, but we think there is an opportunity there.”

According to LaPlatney, the new channel will be aired in all of Gray’s markets, giving it a reach of around 24% of U.S. TV homes, much of it in the southeast. To make room for it, other diginets will be bumped in some markets, he said.

The OTT version of the service, a mix of linear and on-demand programming, will not simulcast the multicast version, although there will be some overlap, he said. “Part of the beauty of over the top is that you can see what people are watching, what they like and then we can adjust program strategy based at least on that.”

LaPlatney said that he began thinking about launching a multicast channel in 2017 when he was the CEO of Raycom Media and he lost out to Scripps in the bidding for Katz Broadcasting and its stable of four diginets — Bounce, Grit, Escape and Laff — even though Raycom had a minority interest in Bounce.

LaPlatney brought his interest in multicasting to Gray when Gray acquired Raycom and made LaPlatney its co-CEO.

This is the second time an owner of the Grand Ole Opry has plunged into television with a channel of and about country music. In 1983, then-owner National Life and Accident Insurance Co. launched The Nashville Network.

But through a succession of other owners including Gaylord Broadcasting, Westinghouse/CBS and finally Viacom, it shed its country identity, dropped its association with the Opry and morphed into a general entertainment network. It has rebranded several times over the years and is now the Paramount Network.

This new network will be in my Eau Claire/La Crosse TV Market since Gray owns WEAU/13 (NBC Affiliate) in Eau Claire. There are more country radio stations in this area than radio stations that broadcast other music formats.

Gray doesn’t own any TV stations in West Michigan and I doubt none of them would sign on to that new country network on the sub-channels. I think Gray owns only one TV station in Michigan in Lansing the local NBC.

With Or Without Comcast, Marquee Sports Network To Launch Feb. 22

Hank Azaria Will No Longer Voice Apu On ‘The Simpsons’

Management Openings In Sales And Engineering