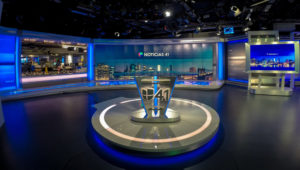 Starting today, Noticias 41 anchors Adriana Vargas Sino and Katrina Soto will deliver the day’s headlines from a redesigned news set, featuring what Univision calls the largest video wall in the New York television market, allowing for newscasts with more mobility and versatility.
The existing 1,800 square-foot set has been redesigned to accommodate new technology that also reduces power consumption and enhances the storytelling experience.

The new studio’s biggest feature is the new video wall, which will increase and intensify the display of videos, graphics and special effects throughout the broadcast. It is a 24-foot long, wall to ceiling, curved monitor wall. In addition, there is a larger Chroma wall to magnify weather maps, animations and enhance the artwork of daily forecasts within the daily meteorology reports.

Other technical enhancements include an 84-inch mobile touch screen monitor that allows viewers to engage and interact with anchors on social media in real time, giving anchors the ability to read their comments and suggestions on-air.

“We are thrilled to unveil our redesigned broadcast studio, which is newly equipped with cutting- edge technology, and kick off a new era for Noticias 41,” said Roberto Yañez, WXTV president-GM. “From the largest video wall in New York City to new, green technology that will reduce power consumption and a new wireless Steadicam — our new set is specifically designed to deliver the best content to the most loyal and engaged viewing audience in the Tri-State area.”