The CBS Station Group is on board to premiere the Monday-Friday strip, along with stations from groups including Weigel, Nexstar, Gray/Raycom, Sinclair, Fox, Meredith, Scripps, Tegna, Mission and Northwest.
By Mark K. Miller | May 6, 2019 | 2:35 p.m. ET. 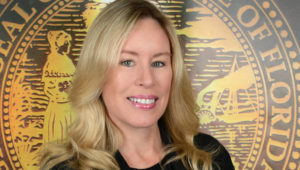 The series will be shot in Miami’s Lawson E. Thomas Courthouse for the 2019-20 broadcast season and will be telecast in Miami on CBS-owned WFOR-WBFS.

Protection Court will be presided over by civil and criminal court judge Carroll Kelly and will capture real-life court in one of the country’s busiest working protection order courts.

She has been on the bench for 22 years and serves as the administrative judge for the domestic violence division for the county. She is also a leading presenter about domestic violence courts, speaking to judges, attorneys and courts all throughout the U.S.

Trifecta is handling all distribution and advertising sales.