Back to TVNewsCheck Home Print this page
NETWORK RATINGS ROUNDUP: MAY 13-19 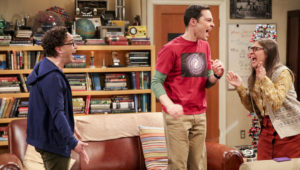 LOS ANGELES (AP) — In its last blast, “The Big Bang Theory” topped the TV ratings by a light-year.

“Game of Thrones,” however, had a comparable 18.4 million viewers when HBO’s same-night reruns and streaming services are included, making it the most-watched episode of any kind in the history of the cable channel.

Despite mixed fan reaction to the eighth and final “Thrones” season , it was a ratings winner throughout, competing with and usually beating shows that appear in three times more homes. The viewer numbers also grew as the season progressed, with the season premiere setting a record that was topped by three subsequent episodes.

“Big Bang” was a colossal ratings winner that helped keep CBS the top network for much of its record run of 279 episodes, the most ever for a multi-camera series.

A prequel spinoff, “Young Sheldon,” is pulling similar numbers in its second season and will extend the life of the franchise. It finished third in last week’s ratings in a timeslot just after the finale.

“Unraveling the Mystery: A Big Bang Farewell,” a special that aired later the same night, was fourth.

Primetime viewership numbers compiled by Nielsen for May 13-19. Listings include the week’s ranking and viewership.