The ATSC Next-Gen TV Conference in Washington this week covered a wide range of updates on what broadcasters have done, are doing and need to do to smoothly get the next-gen transmission standard on the air across the country.
By Glen Dickson | May 30, 2019 | 12:32 p.m. ET.

While the conversation in 2018 about the ATSC 3.0 next-generation standard was mainly about testing services and exploring business models, in 2019 the subject has shifted to commercial deployment —- particularly after broadcasters pledged at the NAB Show last month that they would launch 3.0 broadcasts in the top 40 broadcast markets by the end of 2020.

So, not surprisingly, the discussion at the ATSC Next-Gen TV Conference in Washington this week has focused on what new ATSC President Madeleine Noland calls the “nuts and bolts” of rolling out 3.0 in the near term. 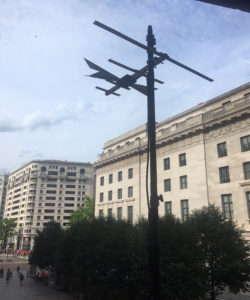 Vendor DigiCAP used this antenna at the Ronald Reagan Building to receive ATSC 1.0 broadcasts from Sinclair’s WJLA Washington and ATSC 3.0 signals from Sinclair’s experimental SFN in Baltimore and then use its home gateway device to deliver them over Wi-Fi to a range of consumer devices.

Sessions Wednesday covered the business negotiations and legal agreements required among multiple stations in a market in order to launch a “lighthouse” ATSC 3.0 station, the application process for receiving a 3.0 license from the FCC, the coordination that is needed with cable operators and other MVPDs (multichannel video program distributors) in order to smoothly launch 3.0, and the juggling act that broadcasters must perform when “channel-stacking” multiple ATSC 1.0 program streams on ATSC 1.0 host stations.

“The test beds have really proven out some of the aspects of the transition, and broadcasters are ready to shift into build mode,” says Patrick McFadden, NAB Associate General Counsel.

Broadcasters can’t be ready soon enough, as the FCC has made clear that the days of 3.0 experimentation, from at least a licensing perspective, are over. In announcing its streamlined application process for 3.0 licenses last week, the FCC also said that as of May 28 it would no longer be issuing experimental licenses except under “unique and compelling circumstances.” Going forward, stations will have to file for regular ATSC 3.0 licenses through the FCC’s License Management System (LMS).

“At this point, that’s all we’re going to process,” says Evan Morris, a lawyer in the FCC’s Media Bureau.

Morris joined FCC Video Division Associate Chief Kevin Harding, Fox VP of FCC Legal And Business Affairs Ann Bobeck and McFadden on a panel detailing the 3.0 expedited license process, under which the FCC aims to turn around license applications in 15 days or less. Morris says the FCC has already received four 3.0 applications since opening up the online portal last week, and yesterday granted licenses to three low-power stations in Oregon that want to flash-cut from ATSC 1.0 to 3.0 broadcasts.

LPTVs don’t need to simulcast their 3.0 programming in ATSC 1.0, and so are free to make such a rapid switch. Full-power and Class A stations, however, will need to simulcast their main 3.0 program stream in 1.0 for a minimum of five years in a form that is “substantially similar” but doesn’t need to include interactive enhancements or other features supported only by 3.0.

Furthermore, if those full-power stations are looking to deliver their 1.0 simulcasts as a “guest” on another 1.0 “host” station, then in order to be considered for an expedited license they need to deliver coverage to 95% of the area covered by their existing 1.0 signal.

“95% is the threshold for expedited processing, which is 15 days,” says Morris. “That’s not to say if it’s 94% we won’t grant the application. But we want to take a closer look at it to make sure the public is being served, particularly in these early stages of deployment.”

There are some benefits for broadcasters included in the 3.0 application process, notes Morris — duopolies, for example, don’t have to strike a formal written agreement to host each other’s 1.0 programming as part of simulcasting arrangements.

Morris emphasized that broadcasters need to meet their notice requirements for channel switches with MVPDs, which during the transition period while the RF repack is underway is 120 days. After July 13, 2020, the requirement reverts back to 90 days.

“That’s regardless of whether you’re a repack station, so you should plan accordingly,” Morris says.

RF consultant Dennis Wallace of Meintel, Sgirgnoli & Wallace, who has been intimately involved with early 3.0 stations including Pearl TV’s Model Market in Phoenix, agrees that stations need to ensure they keep cable operators in the loop. That is particularly true because even in big markets where cable operators generally take direct fiber feeds from stations for carriage, they still rely on stations’ over-the-air signals as backups.

“A sticky thorn in our side was getting the MPVD notifications out to our cable partners,” says Wallace. “There’s a lead time associated with that. So you don’t want to miss that deadline of getting those notifications out and then suddenly you have a three or four month delay because you’re just now sending out the notification letters. And the FCC has been pretty strict about enforcing that regulation.”

Going forward, there will be a lot more to address with cable operators regarding 3.0 than simply letting them know where a station’s signals can be found. That was clear from a whirlwind presentation given by Steve Watkins, executive director of strategic technology policy for Cox Communications, which is working with the 3.0 broadcasters in Phoenix (sister company Cox Media Group is also a Pearl TV member).

“There are multiple points of impact to the cable network from end to end, and that will be the same for telco or satellite,” says Watkins.

Watkins walked through a number of issues that broadcasters need to address to make the 3.0 transition cable-friendly, including simple ones of letting them know when they’re changing formats for ATSC 1.0 simulcasts to more complex ones like settling format wars on UHD content and figuring out how interactive applications delivered to a smart TV set through ATSC 3.0 will play nicely will cable navigation systems.

While Watkins painted a daunting picture of all the ways in which 3.0 could be difficult for cable operators to deal with, he did say that if broadcasters deliver compelling content with the new standard then Cox and other cable operators will want to deliver it.

“This is not rocket science,” says Watkins. “It’s a lot of paper cuts.”

Setting up a coalition of stations in each market to launch 3.0 may not be rocket science either, but executives from station consortiums Pearl TV and Spectrum Co. made it clear it is a lot of work, particularly in finding homes for a lighthouse station’s 1.0 programming on other stations in the market. Pearl TV CTO Dave Folsom says the Model Market launch in Phoenix required more than 30 separate agreements including station-to-station deals as well as consent from networks and syndicators.

“The good news is as these syndicators and networks get used to being asked, it will get easier each time, particularly if they’re similar agreements,” says Folsom. “I think the first ones in had the most difficult time, and the last ones in will have the easiest time.”

Spectrum Co. COO Sasha Javid says it’s imperative that once stations agree to move forward with 3.0 that they honor that commitment. He says Spectrum Co.’s launch of an SFN in Dallas was delayed because an initial partner changed its mind and backed out when the buildout was already underway.

There are other lessons that have been learned.

While Spectrum Co. had initially considered a cost-sharing model for stations launching 3.0 in a market, the consortium moved away from it due to a mixture of possible antitrust concerns and the complexity of accounting for individual station’s costs. Spectrum Co.’s Javid says the consortium is careful not to discuss individual stations’ vendor costs, and that each station is covering its own costs for launching 3.0 in a market.

For the larger groups, that will balance out in the long term, says Javid, with a group paying a little more in some markets and a little less in others. Pearl TV has reached a similar conclusion.

“The lighthouse station does bear more cost,” Folsom says. “But most collaborations will cover other markets. So in the long term, over the larger station groups with a large number of markets, it tends to come out in the wash.”

So what exactly is the long term — i.e., how long do broadcasters expect the 3.0 transition to take? Folsom says a realistic starting point should be 2020, when the first commercial receivers will be available, and notes a big benefit for broadcasters compared to the NTSC-to-DTV transition is that 3.0 stations will probably launch five at time, since a lighthouse station can generally support five 1080p signals. But Folsom still figures it will be at least 10 years from then, and probably closer to 15, when the last “nightlight” ATSC 1.0 stations cease operations.

Folsom’s prediction drew an audible groan from some in the audience, though several engineers this reporter spoke with afterward said it was probably a realistic prediction.

But Javid was more optimistic. “I hope we’re not talking about this in 2035,” he says. “The viewpoint Spectrum Co. has taken is let’s get some quick wins under the belt. We’ve identified the markets that we think we can do quickly and prove the concept, and we’re trying to get those markets done this year.

“If you think where we are today, we still have another seven or eight months. That’s the goal, to get a small handful of markets done. If we want to live up to what we said at the NAB Show, we’ve got to make substantial progress in all the markets in the top 40. So you have to start today, knocking out the quick wins. Because you learn.”