Big OTT Question: Whether To Build Or Buy

Panelists from a range of news organizations explain how they decided if they should build or buy the technology necessary to launch their streaming services.
By Janet Stilson | June 14, 2019 | 10:18 a.m. ET.

NEW YORK — When the Canadian Broadcasting Corp.  was developing its CBC Gem streaming service a few years ago, one of the key questions was: what’s the best and fastest way to get out the door? The service, which is both subscription- and advertising-supported, went with Google’s ad stack, which had been previously used by the organization’s linear channels.

“They were a great partner in helping us create a dynamic ad insertion solution from linear into the OTT [over the top] platform. We worked closely with them to do that. From the backend perspective, we ended up signing with a company that we work with to this day,” said Roma Kojima, CBC’s senior director of OTT video. “We’re not alone in this. We get to create and solution things and figure stuff out together.”

CBC’s decisions to use the services of outside vendors contrasts markedly with what some others are doing. The approaches vary according to the type of company involved and their particular challenges. That was front and center during a session called “OTT: Build or Buy” during TVNewsCheck’s annual OTT News Summit on June 11. 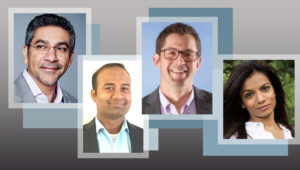 CBS News Digital, which started out in the streaming space about six years ago, took a different technology avenue. Originally, it worked with Roku, which built an app for CBS and maintained it for a year. As viewership began to build, and the service began to migrate to other platforms beyond Roku, CBS decided to take matters into its own hands.

“We decided to build a streaming platform that nobody had at that time, because we were the first 24/7 digital media service,” said Ashutosh Nayak, VP of engineering at CBS News Digital. Currently, “I would say 90% is internally built.”

Bragging rights to pioneering work in the streaming space were also conveyed by Rajin Persaud, VP of CNN digital products. “When we launched CNNgo in early 2013, what we launched out of the gate was something nobody else had ever done,” he said. “We had three patents that were issued for creating linkage between a digital rundown and TV rundown in real time.”

CNN wanted to put consumers in control, allowing them to rewind a live feed. Eventually that function was taken out, because it wasn’t used that much.

“None of the end-to-end providers that existed could do what we wanted to do, so we had to build it internally,” Persaud said, although CNN uses Adobe for its ad stack. “We built the teams internally, and we built the product internally.”

In contrast, Weather Group opted for a hybrid model. Its Local Now streamed service pumps out some 400,000 videos each day, geo targeted to more than 225 locations. “With that unique proposition, from advertising to the technology stack behind it, it truly has to be a hybrid model for us,” said Jeremy Jones, head of product and innovation at Weather Group.

The panelists noted that building streaming technology solutions is quite costly — and maybe not a reasonable option for stations in smaller markets with more limited resources. For them, turning to outside vendors for support is probably a better way to go.

Regardless of how big a region a streamed service is targeting, there are a number of other issues and solutions that need consideration. For example, CNN’s Persaud noted that perfection is not always advisable. “Think about yourself as a news consumer. What you want to do is get the essence of a story,” he said.

At one point, CNN debated whether to take the lower-third of information off news stories, or have a clean feed. “It would have cost millions of dollars to redo our control rooms to get a clean digital feed. So we put the content out there with the lower thirds. The only thing we did was the engineering guys worked some magic where for some of the live feeds, if you rewound it, it would take the ‘live’ off,” Persaud said.

The user experience (UX) was a key consideration for everyone on the panel.  “People have an expectation of a certain lag time — the time it takes for them to get into a program,” said Weather Group’s Jones. As the company has built out the foundation for Local Now, it’s reset the technology to gain efficiencies and ensure that when a user comes to the service, “there’s nothing that’s keeping them from getting to the content they want to have.”

Part of that UX work also involves the placement of commercials. Instead of prerolls, Local Now generally programs six or seven minutes of content before inserting ads.

CNN’s Persaud noted that consumers have very little brand loyalty or affinity anymore. “To me, one of the biggest things out there [that concerns consumers] is performance. The three things we focus on are performance, convenience and ease of use. If your video doesn’t load in two seconds, the rate of abandonment goes up from there.

“If you put a preroll in front of that, then you’re dead,” Persaud added.

The CBC’s Kojima also discussed the importance of emotional connection. “At the end of the day, it’s about what’s meaningful. Even five years ago it was about, ‘Show me that you know me.’ But it’s about ‘Show that you care about me.’”

It’s not an issue that should be relegated to reaching millennials alone, Kojima added. “I think we should be careful about how we unpack that concept.”