Experts say the broadcast industry’s transition to IP infrastructure is likely to dominate this year’s show in Amsterdam. But there’s still plenty of room for developments in the cloud, artificial intelligence, OTT, cybersecurity and more to keep technologists busy on both the show floor and in its conference rooms. For more IBC 2019 coverage, click here.
By Michael Depp | August 29, 2019 | 10:07 a.m. ET. 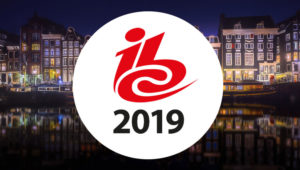 Among all the broadcast technology narratives that will encircle IBC 2019 in Amsterdam from Sept. 13 to 17, it’s hard to imagine any will upstage the industry’s continuing transition to an IP-based infrastructure.

It’s an issue that Joe Zaller, founder of Devoncroft Partners, says will be top of mind for attendees this year.

“We’ve been thinking for several years that 2019 would be an inflection point because the standards were finished and there’s more product available,” Zaller says. “The suppliers have worked hard to produce the right products that the broadcasters need, and media companies themselves have a better idea of the benefits of IP.”

For the last 11 years, Devoncroft has conducted its annual Big Broadcast Survey of tech buyers in the marketplace. One of its key questions is which among the industry’s trends will be the most commercially important to respondents over the next two to three years. For the first time this year, IP topped the list.

Babara Lange, executive director of SMPTE, agrees that the trend will be in IBC’s foreground this year.

One of the transition’s accelerants has been the number of marquee installations of IP-based broadcast facilities across the globe including CNN’s new site in New York’s Hudson Yards, CBC’s Maison de Radio-Canada in Montreal, BBC Wales, NBCU Telemundo’s Miami headquarters and TV 2 in Norway. All of them are providing crucial case studies.

“Wherever you are in the world — if you’re part of the other 90-something percent of broadcasters that don’t have to go and do IP now — they are all watching these marquee projects,” Zaller says.

The assurances those big installations can bring the broadcast community at large are a moving target, depending on the size and scale of the organization, how the transition is implemented and what the business goals are.

Zaller has identified three primary themes for IP, the first of which is interoperability and best-of-breed. Until the ST2110 standards arrived, IP-based facilities couldn’t really be built at scale, he says, noting that his survey respondents overwhelmingly wanted best-of-breed over a one-stop solution. With the standards in place, interoperability is finally maturing, he says.

IP’s second theme is a software-defined infrastructure, which represents a major business shift. That transition is a big ask for suppliers who’ve spent years selling appliance-based systems to broadcasters on a capex basis, as well as for the broadcasters who can now buy technology on an opex basis.

The latter is a particular sea change for public broadcasters like the BBC or CBC, whose governmentally-set budgets are far more conducive to capex deals done years in advance. In CBC’s case, however, the move from a 1.5 million square-foot facility into one less than half its size prompted a shift in that approach.

“They have a two-thirds reduction in the available space for technology equipment, so they have to virtualize things,” Zaller says, noting that if vendors can’t provide their products in software instances, a broadcaster like CBC will get all the costs and not the benefits.

REMI, or remote production, is IP’s third theme, Zaller says. That trend is driving significant resource reuse and cost savings, allowing broadcasters a greater flexibility to produce big events much faster and more leanly than ever before.

“Once you centralize the production, rather than doing an event every week, you can do three a day,” Zaller says. “If you get to that operational model at scale it is an existential threat to suppliers of basically anything that doesn’t need to be there.”

Zaller says broadcast has become a beneficiary of greater availability of bandwidth thanks to more fiber in the ground for high-frequency trading and the giant data centers that need super-fast, low latency switches.

For most broadcasters, however, IP remains less of a fait accompli than a slow transition-in-progress, says Lorenzo Zanni, head of insights and analysis for IABM.

“In terms of adoption, we see most [broadcasters] deploying a hybrid approach because they don’t want to divest all their legacy SDI infrastructure,” Zanni says. “The complexity and the skills needed to transition from SDI to IP still represents a constraint to adoption for some broadcasters.”

Larger organizations are still much likelier to take the risk, he adds.

SMPTE’s Lange agrees. “It’s all a matter of how do you pay for this,” she says. “If you’re not going to build a new facility and you’re in the middle of making decisions about transitioning from a more traditional broadcast environment to one that’s more IP-oriented it costs money, not only in the software you need, but also the talent.”

She cautions that a shift to IP requires whole new skill sets in broadcast engineering, and that the transition may mean fewer people on staff, or certainly different ones.

For all of IP’s prospective dominance of IBC’s storylines, however, there are still plenty of buzzwords to circulate. One of them is likely to be artificial intelligence, a show favorite of the last few years.

While there’s some well-earned suspicion around AI’s hype and its conflation with machine learning, Zanni says he’s seeing growing adoption around content management and routine workflows such as metadata tagging and speech-to-text transcription. He’s also optimistic about AI’s promise for powering monetization through more contextual advertising.

Zanni says there’s some convergence between AI and one of the show’s other big buzzwords, the cloud. He cites NASCAR’s recent migration of some 500,000 hours of content into Amazon Web Services’ cloud to better monetize its archive, for example.

“The reason why they did it was to automate metadata tagging,” Zanni says. “Our research shows that most companies want to use cloud service providers’ functionalities for AI deployment, which is interesting.”

Other IBC narratives Zanni will be following will include the ongoing search for increased efficiency, the broadcasting industry’s shift to direct-to-consumer and OTT, particularly in terms of live streaming and sports.

On the show floor, Zanni says, “I’m interested in seeing what traditional vendors are doing to adapt to all this market change.” That includes the consolidations that continue to sweep the industry, such as Dalet’s recent acquisition of Ooyala, he says.

For her part, Lange says IBC’s international nature is always a boon to her professional perspective.

“The environment is always wonderful,” she says. “I love the fact that it’s an international collection of people. It is a long five days, but it seems to go very quickly.”