Having well-designed lights has impact beyond lowered operating costs due to reduced power consumption and how good the lights make the talent look. LED technology is now in its third generation, so many of its previous kinks have been worked out. The latest LED lights communicate wirelessly, are “perfect” when it comes to the color rendering index and handle a range of color temperatures. Above: The athletics broadcast studio at University of Louisville has a PrimeTime GUS 51 LED Fresnel as well as MSLED 20 XB2, MSLED 40 XB2 and 1SLED XB2 lights. Source: PrimeTime.
By Jennifer Pallanich | September 5, 2019 | 10:02 a.m. ET.

Replacing incandescent and fluorescent lighting with LEDs “greens up” studios while bringing more green to the bottom line.

Light emitting diode (LED) technology is superior to both incandescent and fluorescent lighting for studios not just technically, experts say, but because it can reduce power costs, minimize maintenance needs, pay for itself in about three years and reduce the amount of peripheral space a set needs due to the lighting system.

LED technology itself is now in its third generation, so many of its previous kinks have been worked out. The latest LED lights communicate wirelessly, are “perfect” when it comes to the color rendering index and handle a range of color temperatures. Some sets are even beginning to incorporate moving LED lights.

As with any maturing technology, however, competition is growing. More companies are manufacturing LEDs, which can lower prices for new lighting systems, but experts warn that cheap setups may lead to the need for premature replacement.

Stations replacing incandescent or fluorescent lights want “set it and forget it” lighting that can be changed with the push of a button, says Nick Hutak, lighting designer at Block Light Shoot LLC. They also want “perfect cosmetic lighting” and sets that look dazzling. 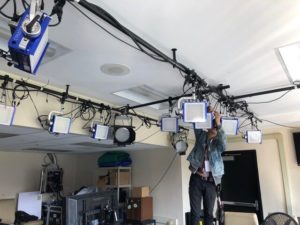 “It’s important to create a lighting design that makes the talent look as good as they look and as young as they look,” Hutak says.

Meeting such demands is a bit easier, thanks to advances in LED technology.

Bruce Aleksander, a lighting director and consultant who often works with Devlin Design Group, says lighting is transitioning away from century-old lighting fixtures and infrastructure that includes dimmer racks and heavy-duty air conditioning support to keep the talent’s makeup from melting under hot lights.

“Everything that they had depended on for decades, all of a sudden is like horse and buggy equipment by comparison,” Aleksander says.

“But it has some problems as well,” he cautions.

Fluorescent lights flicker and some people appear greenish under fluorescents because not all the frequencies of light are visible, he says. In addition, the tubes use mercury vapor, which is harmful for the environment, Noriega says.

“People understand the need to be more ecological and more sustainable in energy use,” Noriega adds. As such, they are turning more frequently to LED.

According to Aleksander, the industry is “just past bleeding edge of technology with a major shift from incandescent studio lighting to solid state lighting, LEDs.”

Organizations that invest in LED lighting end up with more efficient equipment that generates less heat. Incandescent lights have to be replaced as often as every couple of weeks, which means those lights are constantly being moved out of position, Aleksander says.

By comparison, most LEDs can last 50,000 hours, says Sam Cercone, a founding partner of Brightline. “LEDs require virtually no maintenance,” he says. “With LEDs, the quality control of your lighting is excellent.”

On average, today’s broadcast news studios operate between 2,500 and 3,500 hours per year. With the longevity of the LED light source, most stations will replace their sets several times within the life-cycle of their LED fixtures.

But in the meantime, Cercone says, stations that “green up” and make the switch to LEDs will consume 90% less power than in their incandescent days and 40% to 50% less than fluorescent setups. In this way, new lights can pay for themselves in less than three years through reduced power draw for the lights and reduced cooling needs, he says.

Aleksander recalls a recent project where incandescent lighting drew 90,000 watts of power. With the LED set, demand dropped to 6,000 watts, he says.

“After that, they were ahead of the game,” he says. “The return on investment was only two-and-a-half years.” 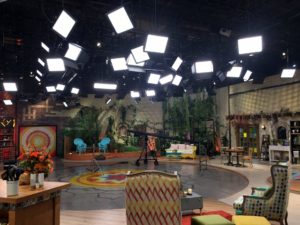 With LEDs, it’s possible to say good-bye to the wall units of dimmers, says Pat Grosswendt, Litepanels co-founder. The LEDs can be directed from the control room to intensify or widen a beam.

“Those are significant differences to the old practices where you were running DC to the lights and someone had to physically move a dimmer up and down” or drop voltage to the lights, Grosswendt says.

Also, incandescent lights had to be a certain distance away from anything flammable, which is not the case with LEDs.

Diane Fiolek, VP creative services director for Devlin Design Group, says this helps with the challenge of lighting smaller OTT broadcast sets that are cropping up in office complexes where there are lower ceilings.

Mark Naidoo, chief marketing officer at Creamsource, says one of the big changes in LEDs is the ability to remotely control lights. Creamsource has integrated lumen radio into its SpaceX fixture to allow the lights to be controlled over WiFi.

He expects to see more uptake of wireless control of lighting systems in the future. “It’s going to be more widely adopted and will improve in terms of reliability and functionality,” Naidoo says.

Hutak says the LED revolution started about a decade ago, led by a promise of lights lasting 20,000-plus hours without “drifting in color.” The first generation of LEDs were “not so great” and “guaranteed” lights started to turn green or magenta. Now, he says, LED technology is in its third generation and it’s possible to “adjust their color and intensity and they hold it” until it’s changed on the console, he says. “It’s amazing.”

Cercone says LEDs of today are “almost perfect” on the color rendering index (CRI), which measures the ability of a light source to faithfully reveal the colors of various objects. Sunlight, with a score of 100, is perfect, he says. Anything scoring above 95 is classified as perfect. 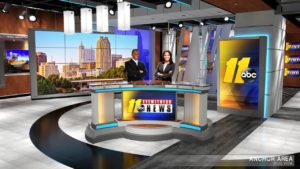 In the early days, the LEDs hit 65 on the CRI. “It was really poor,” Cercone says. “I’ve watched them get better and better” to the point where they are now ranking at +97 on the CRI. By comparison, he notes, fluorescent lights are in the high 80s on the CRI and incandescent lights, while they begin their life-cycle at 100 CRI are unstable and rapidly decay.

Another aspect of lighting is the warmth or coolness of the bulb’s light output.

Mack McLaughlin, CEO and creative director at FX Design Group, says one of the “biggest debates” between designers is over color temperature. The higher the temperature, the whiter the light.

McLaughlin says FX designers have theater backgrounds and that they tend to use color more than other designers.

“We try to get color and some texture in there. It enhances the set,” he says.

The firm has begun getting calls for moving lights, and FX has two upcoming projects to add moving lights to sets for entertainment segments. 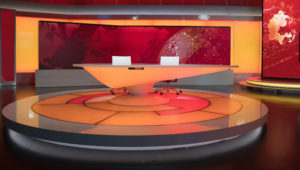 “I think that’s going to be a thing — as quality goes up and the cost goes down, the local stations will be able to afford a half dozen of those lights if they’re going to do entertainment regularly,” he says.

Costs are coming down for some LEDs — but not all.

Glen Harn, PrimeTime president, says the lower-cost LED options, which may be as much as a third less expensive than PrimeTime’s prices, are likely to have fans in them.

“There’s nothing good about fans when it comes to studio lighting. There’s noise, bearings, squeaking. A cheap light is not going to put the best fans in there,” Harn says. TV studios with expensive and sensitive microphones are likely to pick up those noises, he says.

PrimeTime’s LEDs have a heat sink for passive cooling. He says the lights can run at 105 degrees ambient temperature around the clock for a year without degradation of the diodes.

“They look the same, but their color rendering is not as good. It takes money and R&D to do that,” Holshevnikoff says.

As Grosswendt puts it, “quality components should have higher prices than cheaper commodities.” 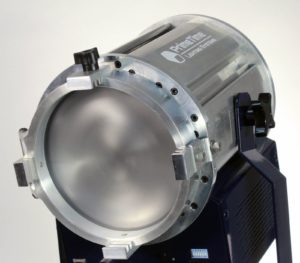 Still, some buyers opt for the cheaper lights and might regret it later, Holshevnikoff says. “The color is usually a bit green. They often spend the money eventually” on replacement lighting systems.

In the end, stations want the best lighting they can get.

As Hutak puts it, lighting is “the invisible support for what people see on air.”

And having well-designed lights has impact beyond lowered operating costs due to reduced power consumption and how good the lights make the talent look.

“A great set can be ruined by bad lighting. A bad, mundane set can be made to look better by good lighting,” McLaughlin says.