The former VP of strategy and business development for Tribune Broadcasting will lead the company’s next-generation television efforts including its ATSC 3.0 strategy and will help identify, develop and evaluate investment and partnership opportunities.
By Mark K. Miller | September 23, 2019 | 10:38 a.m. ET. 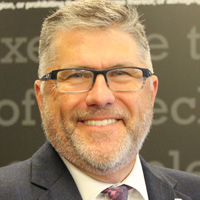 The E.W. Scripps Co. has appointed broadcast veteran Kerry Oslund to the role of vice president of strategy and business development, effective today.

Oslund will lead the company’s next-generation television efforts including its ATSC 3.0 strategy and will help identify, develop and evaluate investment and partnership opportunities.

“Kerry is a well-regarded media executive who brings a new way of thinking about the future of broadcast television,” said Lisa Knutson, executive vice president and chief financial officer for Scripps. “With Scripps’ new, expanded footprint, we have more opportunity than ever to lead the way on next-generation television, and we believe Kerry is the right leader to oversee those initiatives.”

With 37 years of experience in the broadcast industry, Oslund was previously senior vice president of publishing and digital at Schurz Communications, where he oversaw daily operations of TV, radio, print and cable businesses and led M&A strategy. He has held leadership roles at Gannett Broadcasting (now Tegna), Lee Enterprises, KCAL Los Angeles and USA Today.

“I’ve always admired Scripps for its principled approach to business and its leadership team’s commitment to journalism as a bedrock of value creation,” said Oslund. “It is an exciting time to join the company as it accelerates its interests in emerging ATSC 3.0 business models and opportunities.”

Oslund is a past director for Pearl TV and a founder of the TV Interface Practices (TIP) Initiative. Broadcasting & Cable named him to its Next Wave of Leaders list and honored him with a Technology Leadership Award, and he has received six regional Emmys.

Oslund earned a bachelor’s degree in journalism and statistics from Arizona State University, which awarded him a Knight-Cronkite Innovation grant in 2015 for his work on mobile proximity triggering technologies and associated business models.