Multiviewers are in the midst of a rapid evolutionary phase spurred by the proliferation of signals that need monitoring and the IP transition. As the need for control across multiviewer screens increases, the technology is also becoming more integrated with other pieces of equipment.
By Jennifer Pallanich | October 3, 2019 | 10:26 a.m. ET.

Fundamental changes in formats and audience viewing habits alongside the IP transition are driving big changes in multiviewer technology.

Hardware- and software-based multiviewers have benefits and drawbacks when it comes to monitoring production and signal quality in live and playout scenarios. The adoption of 4K and UHD imaging, which requires heavy processing power and can affect latency, makes monitoring increasingly demanding. The explosion of signals that must be monitored is driving facilities to use a growing number of multiviewer screens.

With that, however, comes the need to easily control multiple multiviewer screens. At the same time, multiviewers are becoming more integrated with other pieces of equipment, which can help decrease the equipment footprint and streamline workflows. With all of the advances in technology, however, come some concerns for user health. 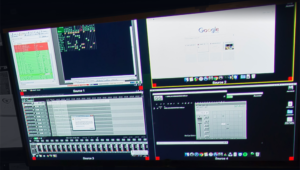 Multiviewer technology brings video, audio, tallies, signals and other aspects of broadcast programming together onto one or more screens. Prices from various vendors range from around $500 for the most basic package up to hundreds of thousands of dollars for premium systems, according to Thomas Tang, founder of Apantac.

For some time, multiviewers have been hardware based on SDI-based infrastructure, but IP technology opens up a number of advantages for broadcasters, says Martin Jolicoeur, strategic product manager for multiviewers at Grass Valley. 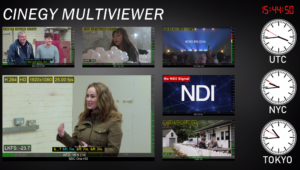 “With SDI-based infrastructure, you are kind of stuck with bespoke hardware or dedicated function hardware,” Jolicoeur says. Moving to an IP infrastructure provides the benefit of virtualized solutions, he says.

The move from purpose-built hardware to software harnesses the “economies of scale of the computing industry” and makes the multiviewer more flexible for users, says John Mailhot, CTO networking at Imagine Communications.

“The input and output of the multiviewer are both on the network,” Mailhot says. “We have the processing of that big collage of pictures, and we can put that anywhere in the facility. Everything is networked.”

“It’s fantastically liberating to grab a computer and put it to work as a multiviewer,” Kirkaldie says. “A machine can be running as a multiviewer in the morning, and then you can turn it into three playout stations in the afternoon.”

At the same time, costs are coming down for multiviewers, Kirkaldie says. “We found that customers are using more multiviewers in more locations,” with some in the cloud and some on-premises, Kirkaldie says. “We’ve seen utilization increase because they can afford more of them. They seem to enjoy dropping more of them around their locations than before, when they may have just taken the savings and run.”

Todd Riggs, marketing product manager for connectivity at Ross Video, says the debate between use of baseband and IP is “not as clear” as one might expect. During last month’s IBC convention, he says, he visited with groups of customers from the same parent company, and while all were doing UHD, some groups used baseband while others used IP.

“It’s really interesting to talk to them. Some were really excited about IP, and the others excited about baseband because it’s just easier. We’re seeing this as a trend, and a multiviewer has to be able to support both,” Riggs says. 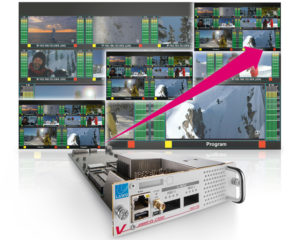 “Live production multiviewers need to be very fast. The latency is incredibly important,” Hedkvist says. “The delay has to be minimum.”

On the other hand, for a multiviewer monitoring playout of 1,000 channels, a delay of 2, 5 or 10 seconds is less critical, Hedkvist says.

Multiviewer capabilities have evolved alongside changes in the broadcast industry, handling first compressed video then uncompressed, and adapting to different formats, different transmission protocols such as SDI, NDI and IP, and increasingly high resolutions such as 4K and UHD. Each of these changes placed new demands on multiviewer technology.

Riggs says he is seeing a lot of the company’s systems go out not just as 4K-ready or UHD-ready, but as 4K or UHD systems.

“There was a thought that this wasn’t going to catch on, but I don’t think this is going to be the case,” Riggs says.

As Avitech business development specialist Andrew Gong puts it, one of the biggest challenges for moving 4K or UHD over IP is maintaining image quality and low latency. “It’s a lot of data going through a limited channel. You either need a good compression technique or really big bandwidth,” Gong says. “If we are able to crack that problem, then a lot of people will see that as a significant advantage” compared to non-IP transmission.

With any extra processing, such as that required for scaling, multiviewers run the risk of lag.

“It’s a multi-faceted challenge that we will continue to struggle with as an industry for the next five years or longer,” Gong says.

Hedkvist says Lawo meets the processing challenge for multiviewers with a solution called distributed processing. Distributed processing runs one application on multiple processors, dividing the jobs into smaller chunks. It relies on an algorithm that creates pictures of the existing picture but at one-fourth size, multiple times, to deliver lower latency.

“It’s fast and high-quality,” Hedkvist says. The mipmapping technology takes raw sources and creates low-latency images. “You can take any amount of sources — 1,000 sources, 10,000 sources, any size, and just add more cards, more processing power. They divide up the job between them.”

The system scales in a linear fashion, Hedkvist says. “You just throw more cards at the problem.”

Evertz’s Ketan Patel, project manager–multiviewer systems, says one such feature is the ability to monitor signals with multiviewer technology.

“We are providing the toolsets to move toward IP with multiviewers,” Patel says.

Beyond that capability is the need to control multiviewers. 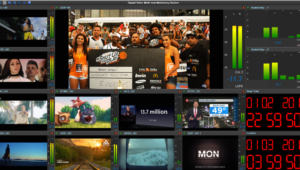 That technology, now a buzzword, started some five years ago but didn’t really take off until about a year ago, Tang says, adding “it’s become a very handy thing to have.”

Mixing video and control and computer input with KBM is a challenge.

“We’re combining three different industries into one product,” Tang says. “They have computers, SDI monitors, KBM switchers. We’re providing a single surface to all them to look at everything.”

Vendors are also integrating different pieces of equipment with multiviewers.

“We continue to see more and more vendors integrating multiviewers directly into their routing or connectivity platform. There’s more of a move toward putting everything into a single space,” Riggs says.

The upshot is that this integration simplifies troubleshooting and configuration for the end user while also integrating control into a common workflow, he says.

A news organization considering multiviewer technology will often have questions about how to “future-proof” their selection, Patel says.

They often ask about 2110 compliance, ability to handle UHD and 4K signals and what the control system is, he says.

Something else that broadcasters want is for multiviewers to support OTT services, says Jian Shen, Mividi president and founder.

“There are a couple of issues related to that,” he says. One is the sheer number of streaming protocols, he says, and another is variants related to bit rates and frame sizes. The challenge? “How to use a multiviewer to monitor the different variants. This is one thing we have been working on.”

For instance, if a service provider has 100 channels and each service has five variants, that’s 500 streams.

“It’s not efficient to monitor all 500 streams,” Shen says. A solution, he says, is combining multiviewer technology with automated tools to monitor streams to better monitor vast numbers of streams.

As video and multiviewer technology improves, Mailhot says, there is a concern about the long-term health eye health of those tasked with monitoring multiviewers and signals.

“As we produce things in the high dynamic range, there’s the question of people in the workplace staring at screens that are fairly close to them,” Mailhot says. “Is watching high dynamic range at those distances a health and safety issue? Will there be long-term effects?”

It is, he says, one thing to watch at a modest distance for a period of time, but could one suffer eyestrain as a result of the job?

“We’re still developing the experience as an industry,” Mailhot says.