Louis Libin, chairman of Election Wireless 2020, coordinates wireless requirements for broadcasters at the upcoming conventions, debates and election night. He says the repack has made assigning spectrum more challenging than ever, and that broadcasters must temper their expectations relative to past years.
By Jennifer Pallanich | December 5, 2019 | 10:28 a.m. ET.

Ahead of the 2020 national political conventions, TV engineers are divvying up access to the TV spectrum, creating a formal database of the users and their channels in a bid to keep signals from crashing into each other.

Election Wireless 2021 is coordinating all wireless requirements for broadcasters, committees and public safety needs for the primary and presidential debates, the political conventions, election night coverage and the presidential inauguration.

In an interview with TVNewsCheck’s Jennifer Pallanich, Election Wireless 2021 Chairman Louis Libin explains how the committee coordinates assignment of sections of the wireless spectrum to ensure news groups, first responders and others can use wireless communications without “stepping on each other” during the national political conventions.

The challenge of fairly assigning spectrum has never been greater. The FCC is repacking the spectrum, removing broadcasters’ access to the 600 MHz range and leaving them to operate in the 500 MHz range at a time when the number of wireless devices needing service is increasing. As a result, groups may not be able to use as many wireless devices during the conventions as they have in the past and should consider bringing wired equipment to the events.

What, precisely, is the Election Wireless 2021 committee tasked with doing?

The political conventions have become a technological showcase for the latest in wireless devices. Now you’re putting the latest and greatest equipment into operations where every piece of the spectrum that can be used is being used. It becomes very complicated.

Complicating that is the fact that there must also be cooperation between local broadcasters. They’re in their home channel plan and there are hundreds of visiting broadcasters there, and the local broadcasters have to be able to conduct their day-to-day operations. Other groups, too, like public safety and the Secret Service, need access to the wireless spectrum. If there’s no organization, they step on each other.

The question is what do we do and how do we do it? The rules are changing. One factor in our favor is that all of these changes are well known in the industry, and the broadcasters are getting more sophisticated. They know there’s a coordinated effort. We try to make sure everybody operates in the same way and has the same powers.

What is the status of Election Wireless 2021?

The committee is in formation now and is about to set the rules. We’ll need to have planning meetings in each city and in Washington, D.C.

The committee used to be 25. I’d love to keep the number at 25, but the problem is that the structure of the network has changed, and people are busy. I still need people from the various sides — microwave, print media, local stations, the network pool. The five major networks look to me if they don’t have anybody to be there for them. I recommend they participate. I want them to be part of the decision-making process. I can’t make decisions in a vacuum. It affects too many people and too many organizations.

The FCC gives the committee special temporary authorization to allocate spectrum in the city of use that could belong to other groups, such as government entities. The commission is extremely helpful to us. They point out bands in the spectrum we could reach with our equipment that we wouldn’t normally look at. We make sure everybody’s cooperating and that the coordination zone is under control.

What do broadcasters need to know about how the TV spectrum repack will affect their operations during the political conventions?

There is much less spectrum available than in the past. We will make sure it is assigned in a fair way so everyone can do the job they need to do.

I want broadcasters to know it’s not us, it’s not me and it’s not the committee that’s being tougher with any broadcaster who has bigger requirements if we’re not able to meet them in the way that they may be used to. If they needed 10 wireless mics in the past, I’d get them 10 wireless mics. Say there’s a local television station that needs wireless mic channels. They might have needed six in the past, but that’s not going to happen.

The broadcasters’ expectations need to be tempered. Everybody should be prepared that the number of wireless devices they have used in the past probably won’t work. They need to be equipped not just with wireless, but a backup. They will need to bring wires.

With so many devices transmitting wirelessly in such confined areas, interference is bound to be a major concern. What methods do you use in assigning spectrum to decrease the chances for signal interference?

We do an interference analysis because there are so many possibilities for interference. We don’t just assign a channel and say, “Here’s your channel,” but we look at how you are receiving that signal. As much control as we have, when you compress so many wireless systems in one area, interference comes about sometimes. 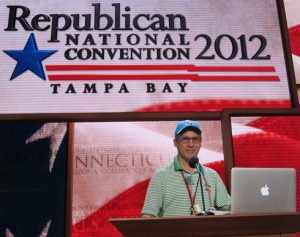 We have a war game just before the event. In this rehearsal, everybody turns on their systems at the same time to make sure everything is operating as it should be. If there’s a problem, they turn things off and turn them on until they find the problematic transmitter. We do this a few days before an event so if they need to change a transmitter or filter, there’s enough time to get it from their suppliers.

How do you resolve interference disputes that arise during these events?

Our rules are close to seven pages long, about 34 rules in draft form. They deal with dispute resolution. If we can’t resolve it, we pull in the FCC. We’ve never needed them to solve an interference issue between broadcasters. They’ve always found a way to work cooperatively. It’s on an engineering level. It’s “how do we make it work?” It’s not network against network.

The best thing is if everybody could get along well, and they do. It’s really about cooperation and understanding. Nobody’s going to win if there’s a spectrum fight or power wars. We need everyone to be happy and operating successfully.

Tags: Louis Libin, political conventions, spectrum, Tech One on One