Yvette Kanouff, a pioneer in video and digital services, will receive the NATAS Lifetime Achievement Award. The awards will be presented at a gala as part of the 2020 NAB Show.
By TVN Staff | January 15, 2020 | 2:19 p.m. ET.

The National Academy of Television Arts & Sciences (NATAS) today announced the recipients of the 71st Annual Technology & Engineering Emmy Awards. The event will take place in partnership with the National Association of Broadcasters at the NAB Show at the Wynn Encore Hotel and Spa on Sunday, April 19 in Las Vegas.

“The Technology & Engineering Emmy Award was the first Emmy Award issued in 1949 and it laid the groundwork for all the other Emmys to come,” said Adam Sharp, NATAS CEO-president. “We are especially excited to be honoring Yvette Kanouff with our Lifetime Achievement Award in Technology & Engineering. We are also extremely happy about honoring these prestigious companies at our gala, again at NAB Show, where the intersection of innovation, technology and excitement in the future of television can be found.”

“The Technology & Engineering Emmy Awards have always recognized the talented and innovative leaders and companies that have made the incredible world of television possible,” said Robert Seidel. One of these leaders is Yvette Kanouff, who has held CTO and president roles at various companies in the cable and media industry and spearheaded transformational technologies including, video on demand, cloud DVR, digital and on-demand advertising, streaming security and privacy. The National Academy is happy to be honoring her with our Lifetime Achievement Award in Technology.”

“We are thrilled that NATAS has again chosen to recognize the industry’s most innovative companies and leading technology minds at NAB Show,” said NAB President-CEO Gordon Smith. “As the world’s largest event focused on the intersection of media and technology, NAB Show is a natural fit for this prestigious awards program. We congratulate the award winners and look forward to celebrating their achievements in April.

The Technology & Engineering Emmy Awards are awarded to a living individual, a company, or a scientific or technical organization for developments and/or standardization involved in engineering technologies that either represent so extensive an improvement on existing methods or are so innovative in nature that they materially have affected television.

A committee of highly qualified engineers working in television considers technical developments in the industry and determines which, if any, merit an award.

The individuals and companies that will be honored at the event follow. 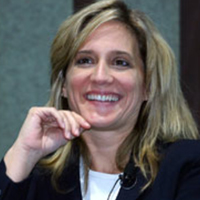 Yvette Kanouff — Yvette Kanouff has been a pioneer in the development and delivery of on demand video and digital services for the past 30 years. She is currently a partner and CTO of JC2 Ventures, a venture firm focused on helping global startups to scale and grow. JC2 Ventures is founded by Cisco Chairman Emeritus and Silicon Valley legend, John Chambers.

Prior to entering the venture capital space, Kanouff headed the $7B service provider business at Cisco Systems, the worldwide leader in IT, networking, and cybersecurity solutions where she led service provider products. She held senior executive roles as both a cable operator and vendor, consistently focusing on new technology breakthroughs in the media arena.

Kanouff was an early pioneer of digitization. After obtaining her Bachelors and Master’s degrees in mathematics, she pioneered pattern recognition algorithms and worked on projects such as automated fingerprint recognition and radar signal processing for Lockheed Martin.

She was named the regional IEEE Engineer of the Year for her work in signal processing.  She moved on to Time Warner Cable to help establish the early standards for MPEG-2 and two-way networking in cable. Her work at Time Warner Cable helped launch the world’s first video on demand (VOD) network and establish many of today’s common-place digital delivery standards and modulation techniques including QAM and QPSK delivery in HFC networks. The early encoding work with Warner Brothers was a precedent to the eventual creation of the DVD standard.

After Time Warner Cable, Kanouff championed video on demand to become a deployable, scalable business, and she wrote many of the industry specifications for VOD. She went on to lead the VOD business for SeaChange International, creating and publishing the first ROI for the product, and helping establish early deployments across the world. This work won SeaChange an Emmy award. Kanouff was a very early pioneer in content delivery networks (CDN), initially called hierarchical asset management systems. She has several patents in the areas of digital signal processing and content management.

After her role as President of SeaChange, she moved on to become EVP of technology and IT for Cablevision. Cablevision was the earliest pioneer of cloud DVR technology, launching the first network-based DVR system in the world. She helped work on technology breakthroughs in cloud-based and virtualized systems for video and advertising delivery. During her tenure, Cablevision won a technology Emmy for pioneering work in network-based DVR.

Kanouff went on to head the newly created video unit at Cisco Systems as SVP/GM. During her time at Cisco she moved on to also be SVP/GM of Cloud Technology and eventually she ran the entire Service Provider business, pioneering network function virtualization and software defined networking in areas such as cable, telecommunications networks, encoding, and routing. She focused on SaaS business models and built the cloud video platform and delivery system for Cisco. Kanouff also focused heavily on technology evolution to the edge and 5G architectures, and she championed open CDN, and new breakthroughs in streaming security and privacy.

She also serves on the board of directors of SAIC and Sprinklr. Yvette continues her industry work, having served on the board of the Cable TV Pioneers, the Society of Cable Telecommunications Engineers (SCTE), the SCTE Foundation, and the IEEE medal selection committee.

Kanouff continues her passion for helping STEM programs, diversity, and technology innovation. She has various publications within the industry and the American Mathematical Society, and she is a frequent speaker at industry events