Back to TVNewsCheck Home Print this page
EXECUTIVE SESSION

Veteran journalist Merrill Brown is trying to rescue journalism in small- and medium-size markets through a new venture, The News Project, that looks to arm them with “a business in a box.” He says smart broadcasters can also capitalize on the moment by expanding their own digital reporting efforts and widening coverage across their DMAs.
By Michael Stahl | January 20, 2020 | 5:46 a.m. ET.

By all accounts, 2019 was a brutal year for the already-suffering newspaper business as the news industry at large took more than its own share of hits.

Small- and medium-size markets in particular saw the closure or consolidation of their local papers, threatening growing news deserts and their negative implications for democracy itself. 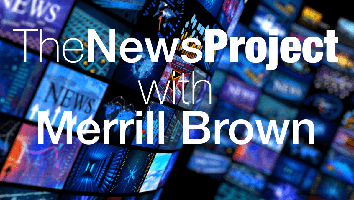 In the face of this crisis, veteran journalist Merrill Brown believes he has a solution. In 2018, Brown founded The News Project, a publishing platform he believes can help small- and medium-size newsrooms compete with larger legacy outlets.

Brown, who got his start in news nearly 50 years ago, is a former reporter for the Washington Post, helped launch Court TV, was the first editor-in-chief of MSNBC.com and the inaugural director of communication and media at Montclair State University.

In an interview with TVNewsCheck’s Michael Stahl, Brown explained how The News Project can help smaller outlets keep their heads above water. He said newspapers’ cutbacks and closures offer opportunities for local broadcasters to expand their own coverage.

And he said the 2020 election is a key opportunity for news outlets to rebuild trust through better fact checking and more on-the-ground coverage of the campaigns and key election issues at the community level.

What is the News Project and why did you see a need for it in the news marketplace right now?

It costs too much and it’s too complicated to operate small- to medium-size news organizations. It’s our view — and it’s not a particularly novel view — that the future of news information in our country and in much of the world is about small news organizations and their need to find viable business models.

We set up the News Project so that small- and medium-size newsrooms could have access to the same level of technology, support, user experience and so forth that big ones do. We also help these newsrooms succeed at getting consumers to pay for content, via paywall, membership subscriptions or additional content sources, which is especially important.

How is this something more than a CMS?

We call it “News Business in a Box.” Everything these types of newsrooms need is already built and available — every template you could imagine needing. It has a set of tools, including subscription membership registration tools. It also includes our support in audience development and in general strategy.

You could spend, easily, $250,000 designing a great site that had the smartest UX in it, and all these other capabilities. On the other hand, you could pay us a fraction of that, and we would have you up and running quickly, with the best thinking about UX involved in doing so, with what we believe to be beautiful and incredibly efficient templates, and then all the stuff in the guts of it — registration membership, things like that — that is not only expensive but really complicated to get one’s arms wrapped around, especially if you’re not an entrepreneur.

The newspaper business has been roiled by closures and contraction. What’s your take on how that dynamic will play out?

As a citizen I’m not pleased that newspapers are closing, consolidating and shrinking. There’s nothing from a civic point of view that’s good about any of that. The production and distribution costs of print no longer make sense. Very large metropolitan newsrooms don’t make sense economically either.

However, the consolidation and collapse of the newspaper business does create a lot of opportunities for entrepreneurs. If I were to give you six reporters with which to build a small newsroom, and told you to go cover Queens, New York City, you could do a heck of a job with it, and even create an efficient model for it in a digital world. It’s what everybody’s looking at. Big media companies like Google are investing in it; lots of people are trying to get this right.

What are the implications of newspapers’ ongoing calamities for broadcasters? Is there a way they can take advantage here?

Everybody who has roots in both the news and the commercial components of local media has opportunities to rethink what they’re doing, and broadcasters are absolutely a part of this. Many broadcasters have invested significantly in digital; many have not.

Most local broadcasters, especially leading ones in large markets, still have significant profitability — much higher margins than local newspapers do. I certainly hope that they are looking at ways to expand their local franchise digitally — actually hiring digital journalists, expanding how they cover local news, expanding across their DMA and not just in the city core or the immediate suburbs. Those that are aggressive about it are already seeing these opportunities.

Do you see any of them doing that?

I don’t want to single anybody out, but I think if you look at a number of large group broadcasters, like Hearst, they have a pretty substantial tradition of local news, and they’ve expanded that, significantly, digitally. The obvious quality, large-market stations are doing a pretty good job.

How do you see local TV — particularly local TV news — faring in an age of streaming and deeper audience fragmentation than ever?

Whether it’s expanding what they’re doing with words, digitally or developing new streaming channels, I think they have great opportunities, in the face of collapsing metropolitan newspapers, around delivering news and information in their markets.

I talk to broadcasters relatively often; I know it’s on their minds, and like their newspaper brethren they’re reluctant to make significant investments. But as I said, small newsrooms and small investments in relatively small numbers of people can make a big difference in a community. I hope they’ll do so. The best of them are.

Some broadcasters have expanded their investigative units and are looking to add value to their newscasts with more of an effort there. Are you seeing any standout work there?

Hearst does this, too, and I like the fact that CBS is trying to do local digital television. I like that CBS has brought multiple assets together across platforms. Those kinds of things are important, but I’d also like to see the relationships between local digital/print news organizations and TV and radio strengthen. I don’t think there’s enough of that going on.

Is investigative news good business for broadcasters? Should these units continue to be a cornerstone of local broadcast news?

Absolutely. Stories that are impactful on local television are a staple of local television, and those that are investing in them are really valued by the community. As a way of retaining the franchise in a different competitive environment, investigative reporting is really important.

Do you see local broadcasters having to grapple with audience trust issues more deeply on the horizon? What do they need to do to head it off?

What’s your advice to broadcasters heading into coverage of the 2020 elections? What do their imperatives need to be?

At this moment in time, when credibility and honesty and the word “lying” is so present in our political dialogue, I think it’s really important that they focus on accountability — making sure that they’re not drawn into “on the one hand/on the other hand” forms of journalism that don’t serve people well, and that they make sure that the premises of what they’re doing are fact-based. We’re in an era of aggressive fact checking, and that’s as important locally as it is nationally.

What should be different about how reporters are deployed to cover the campaigns or they ways in which they frame their coverage?

It doesn’t appear as if journalists, going into various stages of the electoral cycle, really understand, properly, what’s going on on the ground. That’s one of the lessons from 2016, and by that I mean, you read that “Campaign X has raised this amount of money,” or that “They’ve made a TV campaign investment of X dollars,” but you never really get a sense of what’s going on door-to-door, who’s effective in grassroots campaigning.

Generally, how acute is the danger to journalists as they do their jobs these days? How, if at all, can we begin to defuse this danger?

Continue to report and tell the truth. Some years ago, covering a congressional campaign, I was pushed up against a car and threatened by a team of people who didn’t like what I was writing. Threats to journalists have been present during any era. Journalists have to be on their guard because you’re challenging the powers that be and there’s a lot of emotion around it. This is a challenging moment to be sure, but I think we need to do our jobs.

I cannot for the life of me understand why Facebook doesn’t accept the fact that it has the same responsibilities that broadcasters, for instance, have to vet commercial messages.

They’ve had this aversion since their founding to being considered — by investors, by the public, by their employees — as a media company, and they are and their responsibilities are the same as a broadcaster in this regard.

I’m hoping that between now and primary season this spring we’ll see them make some advancements in this regard, but I don’t think it’s happening fast enough. I think when it comes to advertising fairness, unless they’re going to step up and put in programs — at least in cooperation with media regulators — that they will be regulated.