Nexstar taps the broadcaster with 30 years of large-market experience to lead its Los Angeles CW affiliate and its related digital operations, mobile apps, and social media channels. She succeeds the retiring Don Corsini and begins her duties on Feb. 10.
By Mark K. Miller | January 23, 2020 | 3:19 p.m. ET. 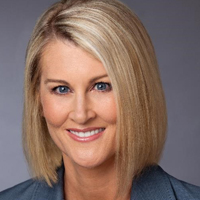 Drafs takes over leadership of KTLA from Don Corsini, who is retiring. Corsini has guided the station as president and general manager since 2009.

Nexstar said that Drafs “brings a track record of success and accomplishment to her new role at Nexstar Broadcasting, with more than three decades of experience in station and sales management, strategic planning, content creation across an array of media platforms, and the development of community partnerships.”

Since 2013, she has been VP-GM of a combination of media properties in Seattle, including KOMO-TV (ABC) and KUNS-TV (Univision) and their related digital operations, and KOMO-AM-FM, KPLZ-FM and KVI-AM.

Prior to assuming her current role, Drafs held positions of increasing responsibility at KUNS and KOMO-TV, where she began her career as an account executive in 1992.

During her tenure at KUNS and KOMO-TV, Drafs and her team developed and executed a number of cross-platform initiatives designed to create a fully-integrated media approach to content, sales, and promotion, and various digital and social media channels including Facebook, Twitter and Instagram. She launched three entertainment diginets, including Comet TV, Mundo Max and Grit, and oversaw the creation of Seattle Refined, a locally-focused lifestyle program, and its companion website, seattlerefined.com.

At KOMO-TV, she was responsible for expanding local news by eight hours per week. On weekends, she launched a new 4 p.m. newscast and expanded the evening news by half an hour. She also expanded the station’s weekday morning and afternoon news by 30 minutes each.

At KUNS-TV, she expanded the number of Seattle Sounders’ soccer games carried by the station to 10 per season and launched the weekly sports highlight show, En Accion.

Drafs is the outgoing president of the Washington State Association of Broadcasters, and current member of both the Seattle World Trade Center Board and the ABC Board of Governors.

She graduated from the University of Washington with a degree in advertising communications.