BOSTON — NBCUniversal has completed its third large, brand-new IP-based media facility with the opening of the NBCUniversal Boston Media Center in Needham, Mass., following previous greenfield builds for its WCAU-WWSI duopoly in Philadelphia and the Telemundo network in Miami.

The $125 million, 160,000-square foot headquarters, located just off Interstate 95 about 11 miles west of downtown Boston, unites NBCU’s four businesses in the market in one location and on one common technology platform. The owned stations WBTS (NBC10 Boston) and WNEU (Telemundo Boston) and the regional cable news network New England Cable News (NECN) had previously operated out of a much smaller facility in nearby Newton, while the regional sports network NBC Sports Boston was based in a similarly cramped space in Burlington, north of Boston.

The open-space design of the new headquarters brings together employees from the four businesses in every key function. Employees are grouped together without borders in not only the newsroom, but also in the sales, creative/programming, and finance/administrative departments.

“We think the collaboration, with everyone all in the same space, will result in just a better product for everybody,” says Mike St. Peter, president and GM of WBTS-WNEU and NECN. “I think that’s what’s cool about this place. Sports and news, Spanish language, all working in one general area, will allow for a lot more sharing of ideas and creativity.”

Parking was a key consideration for NBCU in picking the site as it was looking to bring along its fleet of 12 live trucks and another 30 newsgathering vehicles, some with bonded cell capability, to its new home. Being able to park them all inside is an added perk during snowy Boston winters, meaning crews can deploy live trucks quickly to breaking news without having to scrape off ice and snow.

Construction began on the new facility in August 2018, and took about a year-and-a-half following initial demolition down to steel and concrete. The low-slung building, which was previously occupied by aerospace and defense contractor General Dynamics, is similar in architecture to existing NBCU facilities in Dallas and Stamford, Conn. The design team borrowed some ideas from those buildings and also leveraged what it’s learned about large IP architectures from early implementations across the group, says Keith Barbaria, VP of technology for the four Boston businesses. The main systems integrator for the ST 2110-compliant plant was Diversified. 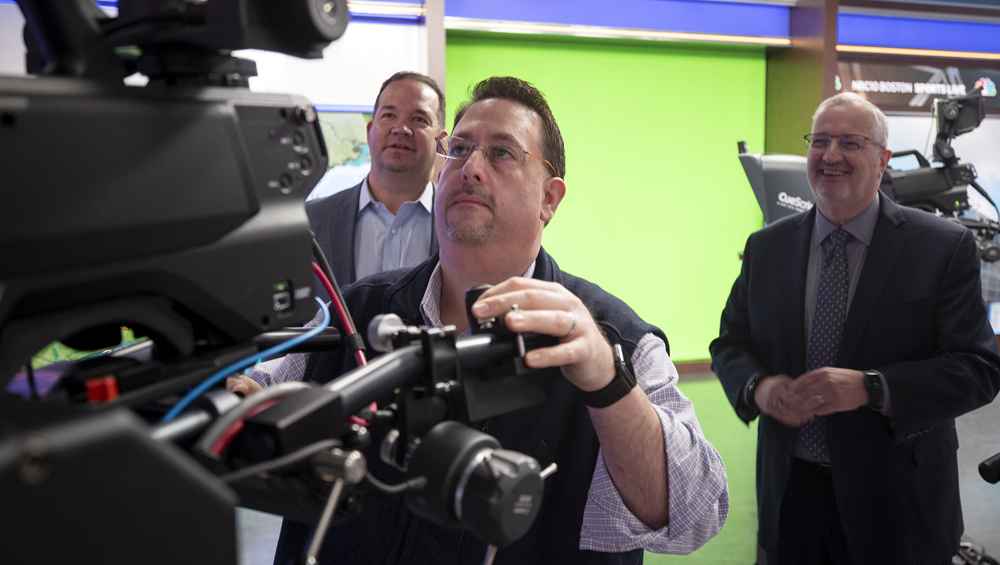 NBCU’s Boston headquarters has production capabilities rivaling a large network, with six 2,400-square foot studios and six corresponding control rooms, as well as a dedicated podcast studio. At its technical core is an Evertz EXT IP router with up to 3,500 potential sources and 1,500 destinations, which connects to some 413 miles of fiber-optic cable, enough for a round-trip between Needham and New York City. The facility was built with as much 2110-compliant gear as possible, with Evertz gateways serving as bridges to HD-SDI gear where necessary.

Only 70% of the central equipment room (CER) is occupied, leaving space for NBCU to add gear to support hubbing or other distributed functions in the future. St. Peter says there are no immediate plans to do so, but that it’s definitely an option.

Most of the new facility, which is centered around a large open newsroom, was built to be camera-ready. There are 66 broadcast service panels (BSPs) throughout for a camera to plug in and go live and 91 wireless mics that allow talent to roam the floor. The large staff break room even has a built-in kitchen that is wired and lit for television, allowing shows to do cooking or nutrition segments without having to roll a kitchen set into a studio.

Each of NBCU’s Boston businesses has a dedicated studio, with NBC Sports Boston actually getting a double studio that measures 4,800 square feet. Key equipment that is standard throughout includes Sony studio cameras on Ross Video robotic systems, which operate under the control of the Ross OverDrive production automation system and LED displays from Planar and Lientronics. Jack Morton did the set designs, and scenic fabricator Blackwalnut handled the set builds.

The NBA’s Boston Celtics, which own a 20% stake in NBC Sports Boston, has a production unit that works out of the facility. There is also a dedicated space to do preproduction for the 80-odd games broadcast by the RSN each season.

NBC Sports Boston’s new set is roughly triple the size of its previous home in Burlington, which has two much smaller sets. A unique feature is an LED panel in the floor that can be walked over and can display a number of different graphical elements for sports coverage, such as a rendering of football field or a basketball court.

“It’s like going from the JV locker room to the varsity locker room,” says Chris Wayland, GM of NBC Sports Boston and SVP of WBTS-WNEU and NECN, of the new space. “You don’t want to leave it. It’s a complete game-changer in terms of the overall morale of the company to work in a first-class facility.” 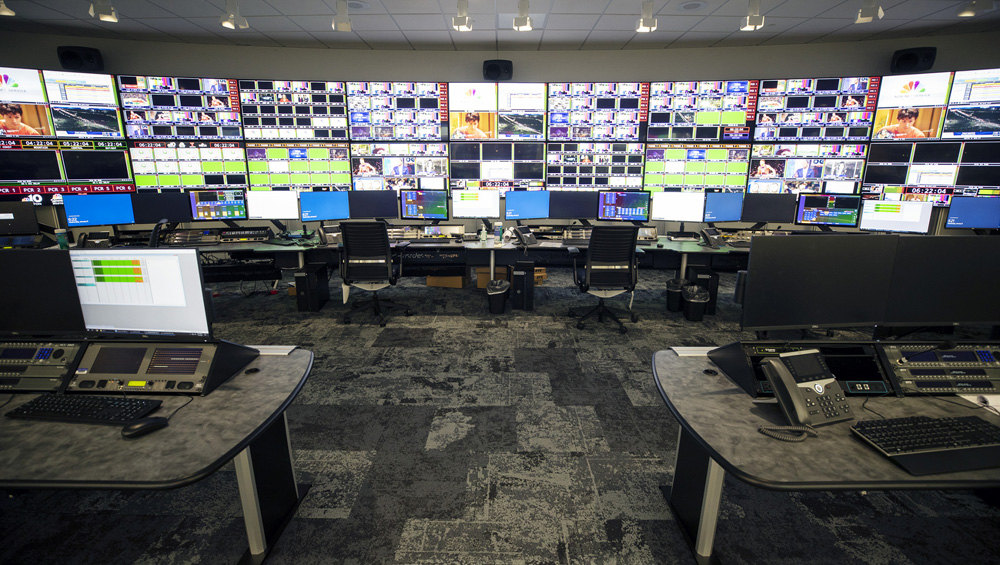 The fully automated control rooms don’t have traditional consoles (though two have small “lifeboat” consoles for emergencies) and are designed to be identical so directors can quickly move control of a studio from one to another if desired. A director “pod” gives full virtual control over the switcher, audio, robotic cameras, graphics playback and studio lighting.

For storage, the facility uses a combination of Harmonic and Isilon along with Dalet Brio software.

The production — and aesthetic — heart of the NBCUniversal Boston Media Center is the 300-seat newsroom, which is immediately visible upon entering the building and gains natural light from a 30-foot-high roof that is framed by light-diffusing windows.

The size of the newsroom is a major upgrade from the previous facility in Newton, where in many cases two or three staffers were sharing a desk and some personnel had no desk at all.

There are three “flash camera” positions in the newsroom, as well as a 4K camera hung overhead, which can all be used for live shots. For monitoring purposes, the newsroom has a huge stadium-style “feature wall” overhead consisting of 27 Samsung 75-inch LED monitors that can be programmed in a variety of configurations from 27 different feeds to two large 16:9 pictures. Outside of the control rooms, there are 400 additional monitors throughout the facility that can be fed by the Evertz IP router. 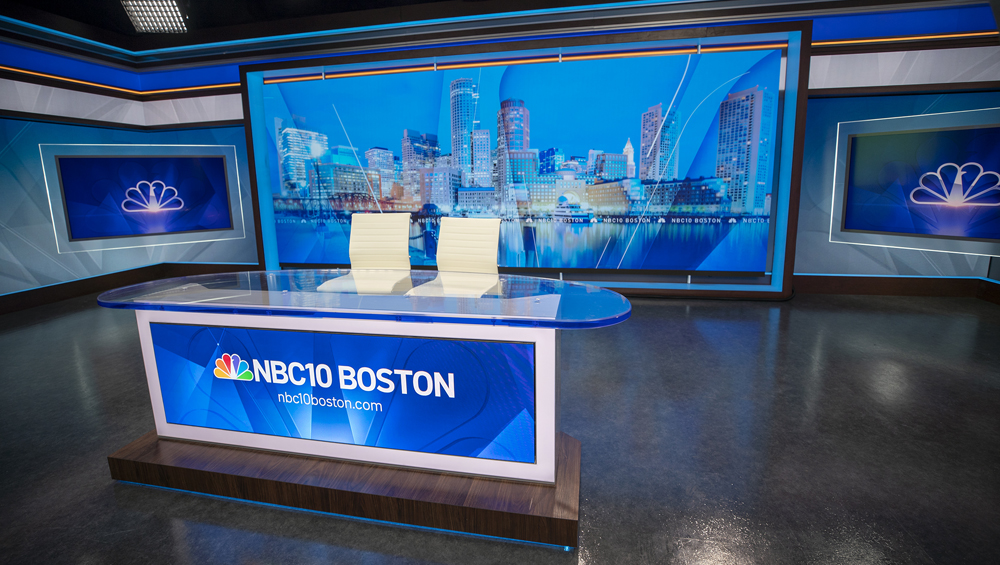 The editorial workflow runs on the Dalet Galaxy newsroom and content management system, which is still relatively new for several parts of the business. When NBCU launched WBTS in 2017, everyone in the Newton facility switched to Dalet from AP’s ENPS. NBC Sports Boston is now changing to Dalet from ENPS with the move to Needham.

Barbaria says that Dalet Galaxy is more of an all-in-one solution for news production than ENPS or Avid’s iNews, which mainly handle newsroom functions and have “arms” that attach to separate media management or editing systems.

“Dalet does everything, from your content management to your archiving to your rundown to your prompter, editing, hi-res editing … so it does it all in one place,” Barbaria says. “It’s sharable desk-to-desk, accessible all over the building, and from a maintenance standpoint, it’s easier to support one system than seven different ones.”

The Boston facility has a few dedicated edit booths for the sports and creative services teams equipped with hi-res Adobe Premiere editors. But most news editing is done in open areas on either side of the MOC, where field teams can drop their laptops, plug into the ethernet, and be attached to the Dalet system to finish their editing and ingest within the station.

Directly behind the MOC is open seating for the engineering and IT staff, who are encouraged to walk around the facility and take a “proactive” approach to technical support.

“We spent a lot of time talking about where this room should be, and what the function of today’s engineer is,” Barbaria says. “And it’s not people hiding in the racks waiting to be called. They need to be customer-forward and customer-facing, and part of the entire operation.”

Besides sharing a common technology platform, the NBCU staff in Boston also share some sophisticated creature comforts. All workstations are equipped with sit/stand desks that can be raised and lowered by electric motors and feature two monitors, one oriented horizontally and the other oriented vertically to make it easier to view the rundown on the Dalet newsroom system.

There is a 24-hour gym with locker rooms and showers, cafe and coffee bars, and another set of showers near the entrance to the ENG fleet. There are also two courtyards that are private to staff — one off the break room/cafe with a water feature, and another off the newsroom with a fire pit. St. Peter says that such amenities simply keep NBCU competitive with nearby technology companies like TripAdvisor. 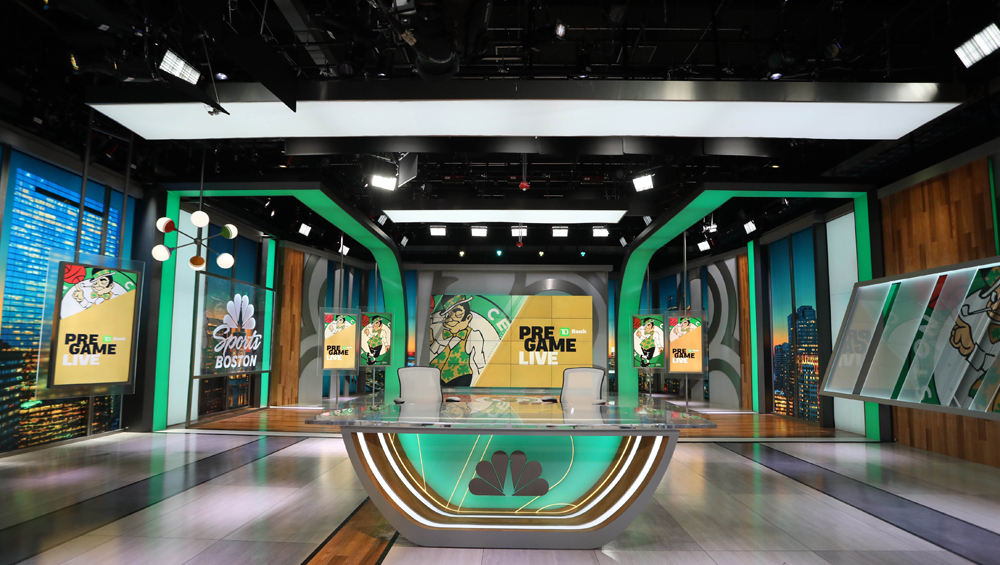 Privacy can be hard to come by with an open-space layout. So the facility has several soundproof phone rooms, quiet/focus rooms, a mothering room and even a “doctor-on-demand room” with a dedicated iPad that staffers can use to have a virtual visit with an MD. Every department, such as the investigative/consumer unit, also has its own “team room,” which is a smaller conference room. And there are lockers for reporters who don’t have a dedicated desk, so they can store their personal belongings.

Wayland, was GM of WPIX New York before joining NBCU in early 2019, is looking forward to the opportunities the new facility will create in Boston. It is a market he knows well after previously serving as GM of Sunbeam Television’s WHDH, NBC’s former affiliate in the market, and he will be taking on leadership of all four NBCU businesses when St. Peter retires in April.

“The huge advantage we’ll have is that nobody else in this market will have the scale that we have with all four properties,” Wayland says. “And we’re going to do everything we can, from every aspect of the business, to leverage that appropriately.”