Barbara Lange, SMPTE’s executive director, is one of TVNewsCheck’s 2020 Women in Technology Leadership Award honorees. Her forward-looking moves at the organization — digitizing its archives and growing and diversifying its membership chief among them — have pivoted SMPTE to feel more “like a 100-year-old startup.”
By Jennifer Pallanich | March 5, 2020 | 9:19 a.m. ET.

Only a decade ago, Barbara Lange was a media industry outsider when she stepped into the executive director role at Society of Motion Picture and Television Engineers (SMPTE).

Lange launched into the role with the mission of reviving the organization through an emphasis on membership, training and the publication of more standards. Now she’s being recognized as an industry leader as one of the winners of TVNewsCheck’s 2020 Women in Technology Leadership Award along with Lisa Pedrogo, VP of New York engineering and strategic initiatives at WarnerMedia.

The two will be honored in a reception during the NAB Show on April 21 in Las Vegas.

Lange describes her career path from scholarly publishing to heading up a century-old media standards body as “a very weird one.”

Armed with bachelor degrees in chemistry and German, she spent her career’s formative years at the IEEE Inc., a technical association that publishes literature about electrical engineering, computer science and related fields.

“It was at the dawn of digital libraries, migrating from print to an online distribution model,” she says.

At IEEE, she had moved up the ranks, starting as marketing manager in 1996 to becoming staff director, product management and business development in 2007. That rise was partly propelled by the mentorship of Jon Dahl at IEEE, who she says challenged her and pushed her beyond her comfort zone. The staff director role called on her to direct the product management for IEEE’s intellectual property portfolio, which included digital periodicals, conference proceedings, standards, e-books and education products.

She hadn’t considered a career in media until an IEEE colleague suggested she might be interested in becoming the executive director for Society of Motion Picture and Television Engineers (SMPTE) a decade ago.

“I’d never heard of them. I didn’t know what it was, other than a professional association,” she recalls. Her husband, however, had worked at CBS in the 1980s, so he knew of the organization’s influence.

She’d been happy at IEEE but viewed the post as a big step up professionally.

“The opportunity to lead an organization like SMPTE was just too good to pass by,” she says.

The chief responsibility of the new director would be turning around the organization. She accepted the challenge. That was in January 2010, at a time when media was increasingly being pushed out over the internet.

“I plopped right into media. I didn’t know anyone, but I found the industry to be extremely welcoming,” she says.

A decade later, Lange has been a driving force at SMPTE: membership is up, more standards are being published at a faster rate and more educational resources are available to members. She says she was taken aback upon learning she was named one of this year’s two recipients of the Leadership Award.

“It’s surprising to be recognized this way. The women who have come before me have been remarkable and talented engineers,” Lange says. “I’m a scientist by training, but I’m not an engineer.”

Yet she’s surrounded by engineers.

She may not be an engineer, but her leadership skills date back to her youth when she was inspired by her mother’s active participation both locally and nationally in Women’s Auxiliary of the AIME, formerly known as the American Institute of Mining Engineers.

Lange served as a leader in organizations like 4H and was social chairman of her Kappa Kappa Gamma sorority chapter at Washington & Jefferson College as well as yearbook editor during junior high and high school.

“I’ve always felt that I could lead people,” she says. “I’m fair and reasonable, curious and driven and pushy in the right cocktail blend to get the most out of people.”

IBC Partnership Board chair Tim Richards says Lange, who serves on the IBC board, “can be tough when she needs to be” and has a “friendly, supportive and collaborative manner.” The leadership award is “a great proof point” that nice people can succeed as leaders, he says.

Wharton agrees. “She drives us to a destination where we need to be, in a way that brings everybody on board when there are hordes of engineers in a room who think their own ideas are the most important in the world,” he says. “Her most amazing trait is to bring consensus and leadership. They’re leaders in their own organizations and used to being in the lead. She’s figured out how to let them be in the lead while still leading them.”

And she had to do that as a newcomer to the industry.

And industry legend Charlie Jablonski, a former SMPTE president, was free with his wisdom and support. “He would call me, ask how I was doing, what he could help me with. He made me feel like issues are fine, that I’m thinking right,” she says.

Her husband has been her “biggest supporter and rock,” she says. “I couldn’t imagine doing what I do without him by my side.”

When Lange stepped into the executive director spot at SMPTE, there were only seven staffers to handle all the demands of running the organization.

“I set about finding staff to fill crucial roles,” she says. She put together a staff that is “terrific and make everything happen. I try to cultivate an environment where they can do their best work.”

She organized the staff and its operations around the pillars of education, membership and standards. Improvements in marketing drew in new members. “One thing just led to another,” Lange says.

Membership is now up by 30% and new chapters, including student chapters, have formed around the world.

The organization is also “educating more and more people every year.” Those efforts include the SMPTE Motion Imaging Journal, webcasts, virtual courses, local conferences and the SMPTE Annual Technical Conference. SMPTE produces content for NAB and IBC, and this year is providing programming at ConnecTechAsia in Singapore and the Media Production and Technology Show (MPTS) in London.

And calling on her experience from IEEE, she knew the value of digitized content being available for members. 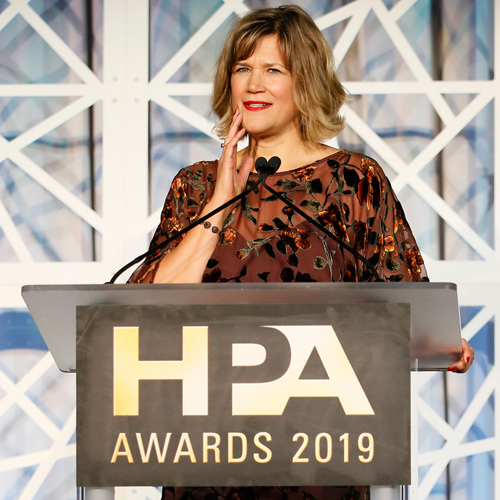 The SMPTE Digital Library makes it possible to reach a global audience, while also providing a “significant” revenue stream for the society through license subscriptions to institutions, she says.

She calls the organization a backbone for education and technical excellence in the industry and says the group has helped the “industry rally around standards.”

SMPTE has stepped up the pace of publishing standards for the industry, whether from new standards or updates to previous standards. Prior to Lange’s arrival, SMPTE was publishing between 20 and 30 documents per year. In 2019, the organization published 50, and is on track to publish the same number this year.

In the decade since she joined, SMPTE has published more than 200 industry standards, including Interoperable Master Format (IMF), High Dynamic Range (HDR) and Video Over IP (SMPTE ST 2110). In 2015, Lange led SMPTE’s acquisition of the Hollywood Professional Association (HPA).

“She was able to make the board realize how important this event was and then not only gain the resources to turn it into a magnificent event with keynotes from James Cameron and others,” Wharton says, “but to leverage it to create” what is sometimes referred to as the SMPTE Centennial Fund.

Lange says the Next Century Fund “is what we are using for investing in our strategic work, which is a lot of pull up your sleeves and organize and fix things.” Currently, she is working with the board to execute a three-year strategic plan focused on increasing the relevance of the group while attracting younger and more diverse membership demographics.

“Organizations like SMPTE need to adapt and change” in step with the evolving world, she says. At the Oscars, for instance, Netflix had more nominations than any other studio, and they’ve only been submitting for three years. “That tells you what the future looks like.”

SMPTE has helped support the industry through many technology inflection points in its 104-year history, she says, “and we’re in one again.”

There are many examples of how the shared economy is changing industries, she says.

With that in mind, she is working with the board and the executive committee on how to adapt and meet those challenges when they arrive.

“I’m excited about those opportunities. It’s invigorating and exciting,” she says. “It feels somewhat like a 100-year-old startup as we shift and pivot to this new world.”