Industry forecasters are lowering projections for core ad spending and revising their spot ad outlooks downward, but one category — political spending — may be 1.5 to 2 times higher than expected, thanks in part to an infusion from Michael Bloomberg.
By Janet Stilson | March 25, 2020 | 5:30 a.m. ET.

With the COVID-19 pandemic disrupting the economy, perhaps sending it into a recession, broadcasters are facing a big shortfall in in spot sales in the second quarter and possibly into the third.

But stronger-than-expected political advertising, particularly in October, may be enough to save the year and allow the industry to post significant spot growth.

Because of the coronavirus impact, Jack Myers, media ecologist and founder of MediaVillage, has revised his projections downward. Rather than 10% growth over 2019, he now expects total spot will rise just 7.4%, to $24.5 billion.

(Myers’ expectations for spot are much better than most of the 27 other marketing and media categories he tracks. When they’re averaged together, Myers projects a 0.1% decline in total revenue, versus a 1.8% rise that was anticipated before the virus hit.)

Myers’s figures do not factor in the cancellation impact of the Olympics as well as live major league and NCAA games. He says he is assessing the timetable for retail business to return to a reasonable level and what the lost local revenue will be as a result and expects to adjust, if necessary, in early April.

Given the cancellations and disappearing business broadcasters have already experienced, most broadcasters would be happy for growth in the high single digits and, if they get it, they will have political to thank.

“One thing that amazes me is that [political] started so early,” said Joe Cerone, Zenith’s EVP of local investment. “We didn’t expect this, especially the large amounts. We did expect local races to start spending, but presidential — just didn’t see it happening this early.”

One broadcast TV executive predicts that political revenue may be as much as 1.5 to 2 times higher than he originally budgeted.

Steve Passwaiter, VP and GM of Kantar/Campaign Media Analysis Group, says broadcasters on the whole can count on $3.45 billion of political money this year. He puts total political spend at $6.5 billion across all media.”

“We raised our projections half a billion dollars for this cycle,” Passwaiter said. “Thank you, Mr. Bloomberg. He’s been the driving force.” 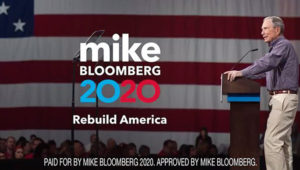 While political ad placements usually come in short bursts with little advance notice, Bloomberg’s more than $500 million in ad spend before he bowed out of the race was “unrelenting,” one executive explained.

Research firm BIA Advisory Services also revised its political forecast upward. It now projects that all local media will garner some $7.1 billion, up from $6.6 billion. And the company estimates spot TV will bring in $3.3 billion, a $171 million increase over earlier estimates.

What that means, BIA says, is that political will surpass automotive as the No. 1 advertising category this year.

“This is even before there is any adjustment to our advertising [projection] for automotive due to the COVID-19 virus and its impact on the U.S. economy,” Fratrik said.

As Passwaiter noted, it was Bloomberg’s massive, advertising-based campaign that cause everybody to reforecast.

While political ad placements usually come in short bursts with little advance notice, Bloomberg’s more than $500 million in ad spend before he bowed out of the race was “unrelenting,” one executive explained. “It was unabated in January, February and into March.”

While he was in the running, Bloomberg spent more on spot TV than any of his counterparts, said Eric Bryant, VP and director of local activation at Carat.

Speaking just before Bloomberg dropped out of the race, Bryant said: “He’s spending roughly 80% of his dollars in what I would call traditional video — spot, cable, satellite and Spanish-language TV. Of the whole picture, 70% is just going to spot TV. In comparison, if you look at the field as a whole, or at least what’s happened in previous cycles, we typically see about 47% to 50% of political ad dollars going into spot.”

And it’s not just Bloomberg and the other presidential candidates driving the spending, Fratrik said. “There’s a chance that the Democrats may take over the Senate, so we’ll probably have a lot of third-party buys that will be vying to help elect Democratic candidates.”

Fratrik identified 14 states where 33% or more of total over-the-air advertising will be political, ranging from Reno, Nev., to Wilmington, N.C., to Bangor, Maine. And he expects that the number of states in that category will grow.

Emily Barr, president and CEO of Graham Media Group, believes Tom Steyer could keep spending as well. “These guys were running, it seems, not only because they wanted to be president, but because they wanted to get Trump out of office. That seems to be their first six reasons. If that’s the goal, then if you don’t become the nominee, you don’t take your ball and go home.”

Steve Lanzano, president and CEO of TVB, sees one potential upside: “If the candidates — presumptively Bernie Sanders or Joe Biden on the Democratic side and ultimately Trump — can’t hold big rallies, television may have a bigger opportunity. There might be longer form advertising. Remember Bloomberg’s three-minute commercial?”

Agencies and stations say they are prepared to troubleshoot the displacement that always occurs in key time periods during the last weeks of the election cycle.

But there’s a new twist this time around: “The markets where we’ve traditionally had heavy political advertising [like those in California and Florida] are ready and prepared,” said Frank Comerford, chief revenue officer and president of commercial operations for NBCUniversal Owned Television Stations. “I think it’s just gone to more markets now that maybe didn’t have as much political as in the past.”