Nate Johnson, NBU Owned Stations’ director of weather operations, says the group’s naturally techy meteorologists made a smooth transition to doing their forecasts from home. Viewers have been grateful for the domestic snapshots and fleeting returns to pre-pandemic life they’ve gotten in the process.
By Michael Depp | April 3, 2020 | 5:30 a.m. ET.

Sometimes the best way to test the strength of something is to forcefully try to pull it apart.

The coronavirus has taken that action in innumerable ways. For TV stations, it has stress tested nearly every facet of technology, operations and human resources continuously for weeks now. At NBCUniversal Owned Television Stations, one of the more remarkable resiliencies it has revealed has been the weather.

Or, more specifically, the meteorologists. By the end of this week, the group will have set up 90 of its 100 meteorologists to work from home, a remote deployment of extraordinary swiftness and agility orchestrated by Nate Johnson, the group’s director of weather operations. 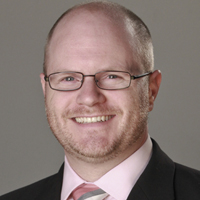 The process has been one of close collaboration and constantly evolving iteration, and it has made clear two dynamics in equal measure. One is that NBCU’s technology and personnel are up to the challenge of keeping their viewers connected to the weather forecasts. The other is: viewers need that connection more than ever, if only to hold on to some fleeting semblance of normal life.

“It may not be the most important thing this minute, but people are still interested in the weather,” Johnson says. “The weather forecast is a small way a lot of us can have a little bit of control over what’s going to happen in the next 10 days. It’s being able to give people a sense of normalcy.”

The effort behind the scenes to make that happen began weeks ago when the virus’ numbers began creeping up and experts started talking about how quickly it could get out of hand, Johnson says.

“We jumped on that very quickly and formalized [a plan] providing our guidance to the stations, then letting them run with that,” he says.

The group’s meteorologists were ready to run. Many had already done some of their work from home via social media platforms and were comfortable with the array of weather technologies NBC employs for its forecasts.

“A lot of our weather folks tend to be tech savvy,” Johnson says. “This is a challenge that they have embraced and really run with, and for the most part, we are solving just a few things.”

The basic issues to be solved included getting audio and video back to the stations and securing remote access to graphics computers. Remotely-based meteorologists needed to be able to hear the TV station via IP, along with getting some basic guidance on lighting and their home setups. Johnson says individual stations were given latitude as to the system that worked best for them, and the result is a range of different home studios across the group.

About half of the meteorologists are using fixed cameras to do their segments with off-air monitors so they can see what they’re looking at. The other half are using tripod-mounted smartphones with LiveU or Dejero apps and a ring light with a desktop computer or laptop next to them so they can drive graphics. Some of the group’s larger stations have rigged more elaborate home setups with chroma key walls — “either a green sheet or cardboard or something like that” — getting close to “downright studio quality,” Johnson says.

Sometimes, home setups have evolved. Some meteorologists graduated from one company-issued phone to additional phones or laptops with VPN access to improve overall quality.

Johnson says remote access to NBCU’s weather technologies didn’t present an onerous extra level of complexity. “It’s just remote control of computers,” he says. “Our radar systems, for example, are available just like our weather graphics systems. It’s just a matter of setting that secure access up and providing our meteorologists the access.”

Not that all of the remote technology is entirely seamless. Johnson says there are latency issues one would get with any bonded cellular-type live shot connection — “a couple of seconds here and there.”

The more latency built in, the higher the quality and robustness of the signal, Johnson says. But that has created some small issues, especially around cross-talk with the studio. He adds what the meteorologists are looking at on their computer screens is what’s going on in real time for viewers over the broadcast signal, but their picture or audio may be a second or two behind.

Because of that, Johnson says they have to be mindful of pausing “and be sure to sit on that pause long enough long enough for their video and audio to actually catch up with it.”

As to the cross-talk problem, Johnson says they’re trying to jettison most of it. Instead, anchors often toss to the meteorologists with a question that they use to kick off straight into the weathercast, only talking back to the anchors once they’re finished.

Of course, having nearly 100 weathercasts produced from a widely-varying array of makeshift home studios has yielded all kinds of small moments of MacGyvering.

Among them: “I have seen some really ingenious ways of being able to hold the phone steady when you are awake at four in the morning by yourself,” Johnson says.

That was in Philadelphia, where meteorologist Bill Henley lacked a proper tripod and instead “strapped the phone on to a wine bottle,” Johnson says. “It gave the right angle, it held the phone steady and it worked really well.”

Was that bottle full or empty?

There are also the grace notes that come into the frame, sometimes literally in the form of children or pets for whom the weathercast has simply become an intrusion on their quarantined home life.

Viewers of KNSD San Diego, for instance, have learned to keep an eye out for the occasional appearance of meteorologist/conservationist Dagmar Midcap’s pet chicken.

“Television is all about connections, about people inviting us into their homes,” Johnson says. “Now we are inviting the viewers into our homes. It warms you up a little bit.”

Of course, these bonds — both human and technical — have yet to be tested by a serious weather event like a tornado or hurricane compounded with the pandemic. The need to shift to wall-to-wall weather coverage for more than just a few minutes will stress test this tenuous system yet further.

“We are still thinking about how we want to produce that,” Johnson says. “How can we package and polish that in a way that allows us to continue to maintain social distancing, keep as many people home as possible but also provide a clean production so production errors don’t get in the way of communicating the critical information that we are providing?”

In that event, impacted stations will go in with a plan and adapt and adjust it as reality dictates, just as the NBCU stations did with the hurry-up football of weathercasting from home in the first place.

And once more, the stations will rely on its versatile meteorologists and technical staffers to get it done.

“It is just the ingenuity of our people coming up with new ways to use old things and finding new things to fold into this,” Johnson says. “Without that and the willingness of their families to allow us into their homes, none of this works.”

Editor’s note: An earlier version of this story incorrectly identified Steven Sosan as the meteorologist who used a wine bottle to prop up his iPhone camera. It was Bill Henley.