Back to TVNewsCheck Home Print this page
UPDATED FRIDAY MORNING

The longtime force in telecommunications regulation and policy was involved in the banning of cigarette advertising on broadcasting, the regulation of cable and rules prohibiting broadcasters from discriminating in employment on the basis of race. He was 96.
By Harry A. Jessell | April 9, 2020 | 3:45 p.m. ET. 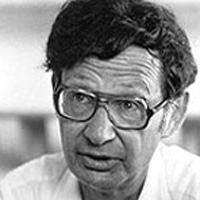 Henry Geller, who as the general counsel of the FCC during the Johnson administration and activist head of the National Telecommunications and Information Administration in the Carter years played a large role in the development of broadcasting, cable and telecommunications over the last quarter of the 20th century, died in Washington April 7 after a long battle with cancer. He was 96.

At the FCC in the 1960s, under Chairman Rosel Hyde, he provided the legal rationale for the eventual banning of cigarette advertising on broadcasting, the regulation of cable and rules prohibiting broadcasters from discriminating in employment on the basis of race. A decade later at NTIA, he advocated for increased funding of public television and modified his strict regulatory approach to broadcasting, arguing for a 2% spectrum fee in place of content regulations.

According to Broadcasting (Oct. 10, 1977), Geller joined the FCC fresh out of Northwestern law school in 1949. He was in and out of the agency twice between then and 1957. He returned for his third and final tour in 1961 as deputy general counsel under FCC Chairman Newton Minow and then general counsel under Hyde.

After leaving the commission in 1973, he continued to write about and advocate for progressive and consumer-oriented communications policy at think tanks and on boards.

Although a liberal Democrat all his years, Geller’s positions on communications policy evolved over the decades. “I’ve been wrong any number of times in the past,” he said in a 1979 interview with Broadcasting. “I think it’s a strength to change your mind.”

And rather than overseeing stations to make sure they fulfilled specific public service obligations, he came to believe that it was better to lift those obligations and simply charge stations an annual 2% fee for their use of the spectrum.

“Henry Geller was an inspiration to a generation of communications attorneys,” said one of those attorneys, Gregg Skall, who served as his general counsel at NTIA. “A brilliant lawyer with an unflagging devotion to the public interest.  Few have matched his ability to marry unflagging idealism with a pragmatic political view. For all his brilliance, though, the truly magnificent thing about Henry was his appreciation for people and willingness to treat everyone with respect and dignity. Through the years, that was the best and most consistent lesson I learned from Henry Geller.”

Another member of that generation, Donna Lampert, said Geller “pushed ideas that seemed far-fetched at the time (e.g., spectrum auctions) but eventually came to pass. He did not shy away from calling out hypocrisy or policy blunders, but he always had a fix.

“What made Henry even more special was that he brought grace and wit to serious topics, and was willing to work with anyone to effect change,” she added. “With a flair for words (a problem would ‘shine like a dead mackerel in the moonlight’) he was able to bring attention to important issues.

“So, while he was constantly thinking up new ways to advance fairness, openness and access, his brilliance was his ability to understand and tap into what made people and institutions tick. He always listened, not just to be polite (although he was that too), but because he genuinely wanted to consider what he didn’t know. Humility on his scale was and is a rare quality in D.C.”

“We will not see Henry’s unique combination of special qualities again: a brilliant, creative communications lawyer dedicated to the public interest, with a love for garlic pizza and classic movies in equal measure,” said attorney Stuart Brotman, who worked with him at the Aspen Institute and the National News Council and later was his special assistant at NTIA.

Geller was born on Feb. 14, 1924, in Detroit. He attended the University of Michigan and earned a degree in chemistry, but after a stint in the Pacific during World War II he chose to pursue the law at Northwestern University.

He is survived by his wife Judith, children Kathryn Edwards and Peter and one grandson. At Geller’s request, the family is planning no memorial service.

Henry was a brilliant attorney and public servant but more importantly a wonderful human being. One indelible memory I have is of Henry outlining a brief, including full citations, from memory while actively participating in a meeting. His genius and life-long commitment to the public interest were matched only by his generosity mentoring several generations of communications lawyers. Henry Geller was one of a kind and it was a true privilege to work with him. He will be deeply missed by the many whose lives and careers he impacted.