Back to TVNewsCheck Home Print this page
DMA 138: ROCKFORD, IL 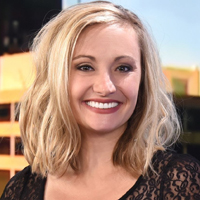 Moon, who has been with WREX since 2014, most recently was assistant news director and was the station’s leader of digital content. She will be replacing Josh Morgan, who is now WREX station manager.

“I’m thrilled to have the opportunity to lead such a talented group of journalists in a community I love and now call home. This is truly my dream job, in my dream newsroom,” Moon said.

During Moon’s time at the station, WREX has won several of the industry’s biggest awards, including the 2018 National Edward R. Murrow Award for Overall Excellence.  The station has also been named Station of the Year by the Illinois Broadcasters Association the last two years.

“Audrey has played a leading role in the success of 13 WREX from the day she stepped into the newsroom 6 years ago,” said Morgan.  “Not only will our newsroom not miss a step, they will thrive under her leadership.”

Moon is a graduate of the University of Missouri’s School of Journalism and has worn several hats during her time at 13 WREX, including internet director, content manager as well as assistant news director.

She helped form the first investigative team in the Rockford market, and it’s something she hopes to continue to prioritize in her new role.