The pandemic created an opportunity to stress-test distributed and virtualized workflows right now that stations and networks were already considering for the future. The industry’s shift may now be ahead of schedule because of it. Above, NBC Universal’s Boston Media Center is one of the latest all-IP broadcast facilities.
By Glen Dickson | April 23, 2020 | 10:01 a.m. ET.

What happens in Vegas, didn’t happen in Vegas.

At least not this year. This week the broadcast world was supposed to gather at NAB 2020, some 90,000-strong, to demonstrate and discuss the latest developments in technology. But those plans, along with just about every other regularly scheduled human endeavor this spring, were scrapped as the COVID-19 pandemic swept around the globe.

Technology vendors have filled the information void with webinars for the press and freelancers and virtual training sessions for their top customers. And they say that despite COVID-19, the industry’s shift to IP networking and cloud workflows is still progressing — and is perhaps even ahead of schedule.

If there is any positive for the broadcast industry amid a worldwide crisis that has cleared out newsrooms, shut down entertainment productions, halted major sports and hammered advertising revenues, it is this: COVID-19 created an opportunity to stress-test distributed and virtualized workflows today that stations and networks were already considering for the future.

From the CBS Evening News being produced remotely by CBS affiliates to latenight hosts broadcasting from their homes to global concert events like One World: Together at Home, broadcasters are proving just how much can already be done with IP connectivity and cloud-based production tools.

“This current circumstance is going to serve to accelerate trends that were already present in the market,” says Josh Stinehour, Devoncroft Partners principal analyst. “So from a technology standpoint, movement toward more remote [REMI] production in a sports context, moving more workflows into cloud environments or direct-to-consumer initiatives.”

Stinehour, along with Devoncroft founder Joe Zaller, has produced several podcasts to discuss COVID-19’s economic impact on the media technology business since its annual summit was cancelled last month along with NAB 2020. Not surprisingly, he says the pandemic’s halt of most new production, particularly in sports, will have a major effect on the vendor community.

With most big customers effectively ceasing capital spending for the near term, Stinehour expects a big revenue hit that will lead to further consolidation by bigger vendors and the shuttering of some smaller entities. The cancellation of this year’s NAB, and the shift to virtual marketing it has necessitated, could also have a lasting impact on the way broadcast technology is sold.

While the long-term impact of COVID-19 on the vendor community remains to be seen, the immediate fallout seems clear, particularly in regard to sports production. Mobile truck companies have been some of the biggest adopters of IP networking technology over HD/SDI given the increased input/output capability of IP routers and the smaller, lighter footprint of IP gear. But they are now facing months of no work, and one major vendor, Game Creek Video, has already declared it won’t be building anything new for 18 months.

“About 45% of our revenues are tied to the live sports media market, and we’ve certainly seen the impact of events being postponed,” says Grass Valley President Tim Shoulders.

However, at the end of March Grass Valley was still signing new business, Shoulders says, and the Belden unit expects its planned acquisition by private equity firm Black Dragon Capital to close this quarter.

Before COVID-19 hit, IP business from the mobile truck market had been strong. Grass Valley just sold a full complement of IP-based gear for a new truck being built by All Mobile Video in New York that will be completed this spring. The 4K-capable, SMPTE-2110-compliant Eclipse truck features Grass Valley cameras, camera shading systems and switchers and a core IP routing system consisting of GV Orbit control software running Cisco Nexus 9000 switches. 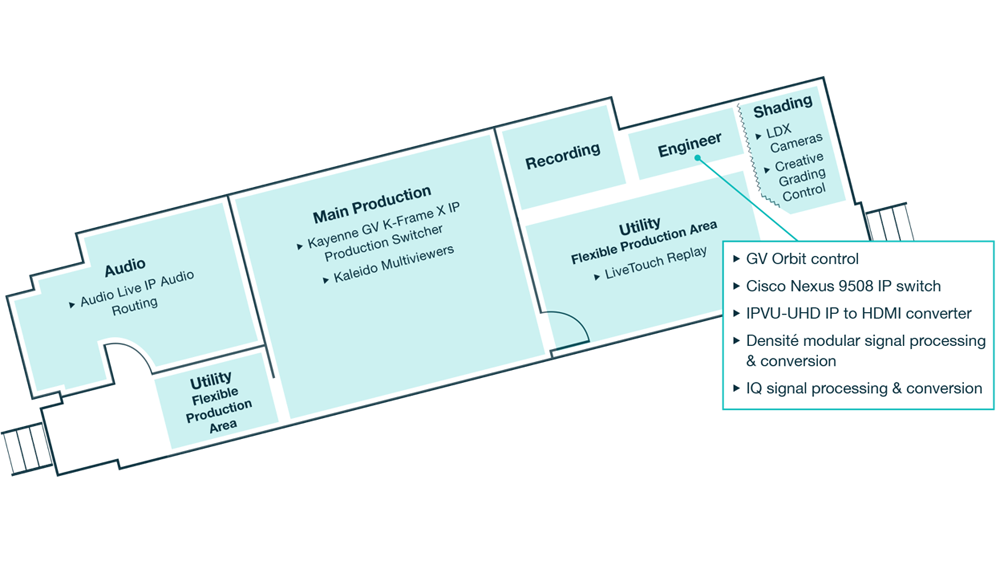 Schematic of a new truck from All Mobile Video

Many broadcasters had plans to eventually move some staff to a work-from-home or virtualized environment, Goyal says, but COVID-19 forced them to rethink their workflows in a hurry. While empty broadcast centers in New York have grabbed the most attention, the pandemic’s social distancing restrictions have affected broadcasters across the U.S. as they seek to minimize on-site staff and get people working from home as much as possible.

“You can see the value of IP,” Goyal says. “One of the value-adds of IP has always been anything, anywhere, making everything available. The fact you can easily connect things together and make it available to certain locations or homes helps, because you can route things anywhere.”

Goyal says there’s still a lot of discussion “as to what happens next,” ranging from future disaster recovery plans to how sports production may resume. He notes that the cloud, where Evertz already has a significant footprint with its Mediator-X MAM and Overture playout software, is increasingly discussed as an option.

With an eye toward REMI production, Grass Valley has introduced a new IP-friendly camera, the LDX-100, which can plug directly into a contribution network without requiring an external control unit. It also unveiled a new 4K UHD switcher, the K-Frame XP, capable of working with both HD-SDI and IP inputs/outputs, and an IP-based replay system, LiveTouch 1300.

Grass Valley is also chasing future business in the cloud. The company announced the GV Media Universe, which it describes as an “ecosystem of cloud-based tools and services” that work with existing products and run on Grass Valley’s Agile Media Processing Platform (AMPP).

Shoulders says customers are “moving to IP as an on-ramp to cloud-based workflows,” and the key trait of GV Media Universe is the flexibility to work on multiple platforms including AWS, Google Cloud and Microsoft Azure as well as private cloud environments. He says Grass Valley envisions a “Media Factory” broadcast workflow where instead of building for peak production capacity “customers flex capacity up and down as they please.”

The Path to Live Production in the Cloud

Evertz has handled linear playout from the AWS cloud for Discovery’s networks for several years and has done its fair share of taking live programming and streaming into the cloud for playout including “Shark Week” after-shows and auction shows on Velocity. Goyal says the next area of focus for Evertz and other vendors is tackling live production in the cloud, particularly in the wake of COVID-19.

“That is the epitome of the broadcast chain,” Goyal says. “If I can move production from an environment where I’ve got all the equipment, and I’ve got everyone congregated in a central location, an arena or a stadium, to an area where I’ve got it distributed across cities, or maybe across countries — where I’ve got a number of different pieces that may be on-site, or may be spread around in the public cloud, but still be able to produce a live event.”

As sports production resumes, Goyal predicts that some smaller, six-to-eight camera events that would have traditionally been produced with an on-site mobile truck will be done in the cloud. He says bigger events will still be handled with an on-site crew and production trucks “but maybe in a socially distanced environment, leveraging IP to create a more distributed production environment in a stadium.” That might mean bringing a series of portable units and connecting them in a spread-out configuration, instead of just relying on one or two trucks. 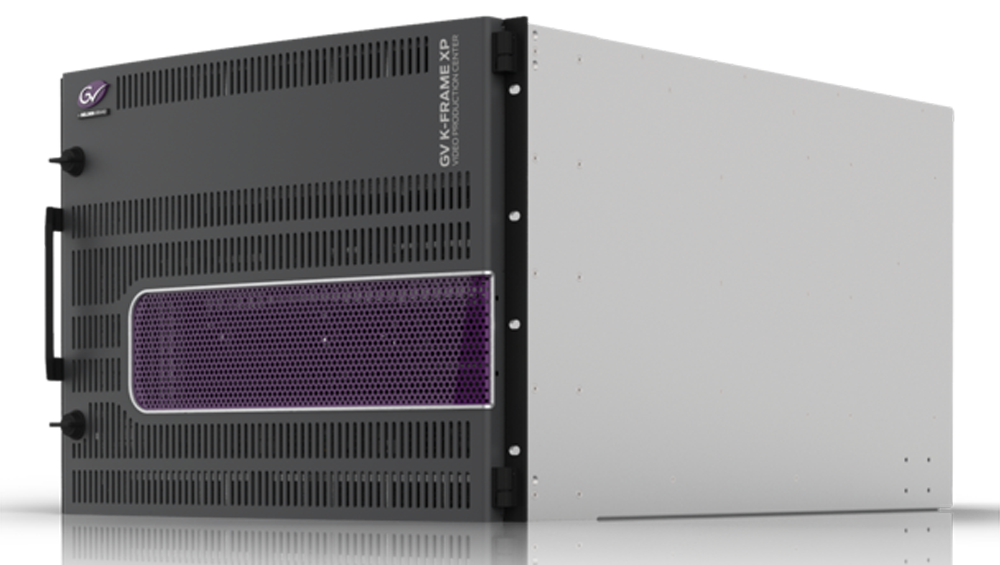 Latency has continued to be a challenge for producing in the cloud. Goyal thinks handling uncompressed signals in the cloud is unlikely, given the amount of bandwidth it would chew up. But he says new compression schemes like JPEG-XS, which deliver high quality with sub-millisecond latency, could be enablers.

“There’s going to be some level of compression, but you’re going to look at what’s the lowest latency I can get to do that?” Goyal says. “So that’s really the next step, especially out of this pandemic: a rethink of what’s going to be acceptable in terms of doing cloud-based production.”

Looking more broadly at IP and cloud infrastructures, there is plenty of action underway. Two of the biggest developments come in the wake of last year’s Disney/Fox merger. Fox is working with AWS to create a public cloud-based platform to handle ingest, production and playout for all its businesses, as well as building a new technical hub in Tempe, Ariz., which will eventually replace the Los Angeles “Pico” facility that Fox sold to Disney but still uses under a transitional services agreement.

ESPN’s primary operations will continue running out of Bristol, Conn., while entertainment broadcast playout for ABC, Disney Channels, Freeform, FX and National Geographic will be consolidated at the large facility at The Woodlands, Texas, which Disney acquired as part of the Fox deal. The Texas facility will be expanded and improved with new IP gear, allowing it and the Bristol facility to act as backup sites for each other.

Meanwhile, some functions for traffic and programming operations will remain in Burbank and New York. The ABC-owned stations already centralized master control with Encompass Digital Media back in 2014.

Whether a customer takes the public-cloud route like Fox or the private-cloud approach like Disney, vendors say the control software they sell is essentially the same. Imagine Communications President Steve Reynolds says that going public or private cloud is no longer a technical decision but instead a commercial one.

“For operators that have very large private clouds, the commercial aspects of that start to look very similar to public cloud,” Reynolds says. “But that does require scale. We work with a couple big media companies that do have that scale.”

As broadcasters look to the cloud, competition among software vendors is heating up with a lot of new companies entering the market. Peter Wharton, president of consulting firm Happy Robotz LLC, recently analyzed playout software options for a major network. He identified 95 linear playout solutions and 32 cloud playout solutions.

Out of the 32 cloud solutions, 18 are “lift-and-shift” systems where traditional vendors modified their existing systems for linear, on-premise playout and ported them to the cloud. Fourteen were cloud-native, including new companies like Amagi from India, Veset from Spain, coral bay.tv from the U.K. and Bcnexxt out of Germany.

Wharton says there is a major difference in how the systems operate, including a four to eight times difference in operating cost between some of the optimized, cloud-native solutions and the lift-and-shift systems. He says that some of the cloud-native companies are also being more aggressive on price and offering more cloud-friendly business models such as subscriptions over initial capital investment. He cautions that legacy vendors may need to step up their game.

“The ability to shift to something in the cloud that’s economical is so much easier than in an on-premise system,” Wharton says. “Once you’ve got your workflow in the cloud, it’s significantly easier to switch vendors because you’re not having to build new infrastructure. If the threat and pressure of competition isn’t felt today, it will be felt tomorrow.”