ABC Owned Television Stations had begun moving many of its workflows into the cloud over a year before the onset of the coronavirus pandemic, making for a faster and smoother transition once remote workflows became necessary. Tish Graham, the group’s VP of OTV technology, says the current crisis will “absolutely” speed up the industry’s transition to IP and the cloud.
By Michael Depp | May 20, 2020 | 4:35 p.m. ET.

At ABC Owned Television Stations, “the foundation was already built” for a migration to cloud workflows, says Tish Graham, the group’s VP of OTV technology. That enabled a swift transition to remote production once COVID-19 pushed the majority of its staffers into work-from-home environments.

Graham says the pandemic has had an accelerating effect on the industry’s transition to IP and cloud-based workflows by instilling confidence in their reliability. “It has actually loosened up some who were maybe a little hesitant to go there because we had to go there,” she says. “That is how you were going to make it through this.”

In an interview with TVNewsCheck Editor Michael Depp, Graham says the crisis has ensured that bonded cellular will be “a foundational way” of getting content to stations for distribution going forward, and that the use of nontraditional cameras like iPhones for field video will proliferate. She says the group’s current configuration of remote production can continue indefinitely if necessary, even with the addition of ramped-up election coverage and summer’s likely extreme weather events.

And echoing other news technologists, Graham says the human dynamic — not any infrastructure challenge — remains the toughest part of the coronavirus pivot and whatever hybrid remote/on-site transition may come next.

ABC stations, like everybody else, have switched over to mostly remote production. What were the biggest challenges for you in that process?

The biggest challenge was the speed that we needed to get everybody out. What helped us a lot was that we had already started to build a foundation of cloud-based workflow, so it was more about making sure everyone had a laptop and knew how to log in remotely. The underlying technology was already built out.

The hardest part was getting our hands on laptops; the supply chain had shut down as far as getting laptops in quickly. We had the processes and procedures; we just didn’t have the equipment in some cases.

How significantly did you have to adapt your existing disaster recovery plans?

Our disaster recovery plans are really based around you lose your building. There is a fire or something that happens at the building and you have to leave, or something happens to the equipment. This was different in that the equipment is just fine. The building is just fine. The disaster recovery that we have in place is still there, still viable, but doesn’t apply to what we are doing now.

Going into the crisis, how many of your workflows had already migrated into the cloud? Did the pandemic-induced transition make it any faster because that was underway already?

Yes, it did make it faster because the foundation was already built. It was just bringing people up to speed who had never used it before. Making sure that the people who had to use it every day were comfortable with it, that they had the login credentials and they were able to move content around and felt comfortable doing that.

We had already been doing this for 12-18 months. The foundation of moving content around for all of our digital platforms is cloud based, and we used those main foundations to be able to enhance what we needed for news. It was already there, but it was just a matter of getting people trained up.

Are you using AWS WorkSpaces at all as opposed to VPNs?

We are using a lot of different ways to get in. AWS is one of them, and if we need to there are certain applications that we have to use a VPN to get back into the stations. But for the heavy users, for our news and content production, it is all based in an AWS platform.

Now we are showing that we can be nimble, agile in ways that haven’t embraced before COVID. Being able to spin something up quickly, a workflow or workstation or adding something in an AWS environment or in a cloud-based environment within a matter of minutes as opposed to having to build out all this infrastructure locally, it really just adds to the agility that we need to have now.

You have been working in this mode for a couple of months now. Where are you beginning to foresee more permanent changes to TV workflow and production coming out of this?

The use of nontraditional cameras in the field. We are seeing unbelievable video produced, edited and distributed off of iPhones or small consumer-type cameras, and we will see more and more of that across the industry. It gives the content creator the ability to get up close and tell an intimate story in a way that is different than having a big camera on your shoulder. The equipment is going to change in that regard.

The use of bonded cellular across the industry has exploded, and that will continue to be a foundational way of getting content into stations for distribution. If this would have happened 10 years ago, we wouldn’t have had AWS or bonded cellular, we would still be heavily microwave and satellite, and it would have been very difficult and much different, that is for sure. 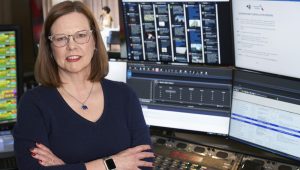 You are known for championing cooperation between TV engineering and IT. Has the at-home production you have been forced to implement advanced that in any way?

Absolutely. It goes back to laying down the foundation years ago and getting people to start thinking in that direction that really made this transition a lot easier.

Looking ahead, in addition to COVID-19 we have a monumental election coming up and the likelihood of a summer marked by severe weather once more. Can local stations handle all of this on the remote production infrastructure that broadcasters have had to build so hastily in the last couple of months?

I believe so. We have proven we can do it in really difficult times over the last months. The underlying foundations [are there] to produce and broadcast or distribute content no matter where it is coming from. We have proven that. It is more about logistical challenges, about what does content need and then technology will come behind and fulfill that need. It is not going to be the same as it was pre-COVID, but we are all going to be OK. We are going to figure it out.

ABC stations have been installing Dalet’s workflow for news. Is that project completed? What impact has it had at the stations using it?

We have deployed it across our groups.  We use part of Dalet WebSpace, which lives up in AWS, and that has been a fundamental way for our field news people to be able to get in and produce, edit and send content around. It is working very well for us.

How do you see the planned NextGen TV rollout this year being impacted by the pandemic?

For logistical reasons alone it is probably going to slow down.  Just being able to get people into stations to install equipment will probably slow down a bit in ’20.  I can’t see how it wouldn’t slow down.

The country is beginning to reopen this month with some loosening of restrictions. How will this effect ABC’s stations? Will you shift to some hybrid of remote and in-studio production?

We are being cautious and following governmental directives in each of our markets. We are in seven different states across our eight markets, and the directives from each state, each city and each county are different. It really is going to be dependent on what is happening at each market and each city. The challenges are different, so the re-entry time and who comes back when is really dependent upon each individual market.

Are you framing out plans for a hybridized return?

That is a challenge that your peers across this industry are all going to be looking at right now. What are the hardest parts of that conceptually for you to deal with?

For all of us it is maintaining the culture that we have all built across our stations and our groups. How do you maintain that culture when you are not seeing somebody every day? It is the culture part, the pieces you can’t touch, that across the industry we have to figure out.

Do you see this moment accelerating the industry’s transition to IP and the cloud?

Absolutely. It already has. What it has done is it has actually loosened up some who were maybe a little hesitant to go there because we had to go there. That is how you were going to make it through this. It has opened up a lot of minds that this really is OK.

What other observations or predictions are you making about the industry’s technology trajectory given this extraordinary, ongoing crisis?

It is a little early to make predictions. We are only a couple of months into this. [As to observations,] vendors have been amazingly connected, reaching out and [asking if] there is anything that you need, anything that we can do from cameras to bonded cellular devices or anything.

We have had people like Dalet or Ross or a lot of the core vendors, Grass Valley, reaching out. We are all a tight-knit group as far as stations, broadcasters and vendors, and it was comforting to know that they had our backs when we were all going through this.