Despite pushing newsrooms temporarily into mostly remote production, set design vendors say COVID-19 won’t have a lasting effect on where sets were heading before the pandemic. They say viewers are likely to see more LED panels and walls, virtual sets and augmented and virtual reality usage in news studios. Above, for the TF1 broadcast news studio in France, Planar delivered a 750-square-foot curved video wall.
By Jennifer Pallanich | June 11, 2020 | 10:08 a.m. ET.

While the COVID-19 pandemic has changed how broadcasters use their studios and spurred the proliferation of home studios, it is unlikely to radically change set design over the next few years.

LED panels and walls remain a foundation in set design, thanks in part to improving technology and dropping costs. Virtual sets are also increasing in popularity due to the flexibility they provide and the ability to do more with less.

At the same time, there is rising demand for digital copies of studio backgrounds for home studios. Vendors also report more desire to take advantage of augmented reality and virtual reality (AR/VR) technology in studios.

“Nobody’s come to us and said: ‘We want a COVID-proof design with nobody getting closer than six feet to each other,’” McLaughlin says.

Mostly, he adds, they want to know what cleaning agents they should use for their sets to avoid damaging materials by using caustic cleaners.

“No one’s seeing COVID as a game changer in set design,” McLaughlin says.

Diane “DiFi” Fiolek, VP and creative services director at Devlin Design Group, agrees. “We’re not seeing a radical departure from anchors at a desk,” she says. “Desks are not getting bigger.”

Adapting To The Pandemic

Broadcasters are keeping designs intimate while using typical set elements to ensure social distancing, with perhaps one person at a desk and another at the big video wall, Fiolek says. “There’s hopeful thinking that at some point we’ll get back to normal.”

But with the six-foot rule in effect, it’s crucial to think about lighting in regard to where people are on set, she adds.

“We are designing with our eyes open. We don’t know how long this is going to last. We know stations want to bring their talent back, their staff back. We don’t think we’ll see continual working from home,” Fiolek says.

While so many were staying home, the company did carry out a set installation at WLWT, the Hearst-owned NBC affiliate in Cincinnati.

“Talk about complicated,” Fiolek says. The studio was open but empty of employees so the Devlin crew carrying out the installation quarantined on site and then quarantined upon return to the shop to avoid exposing other staff. 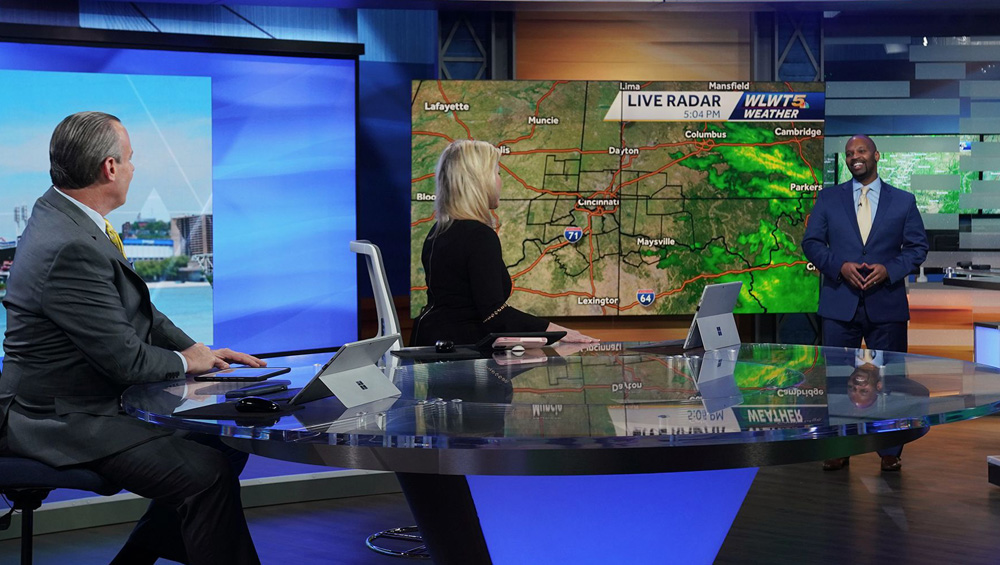 Devlin Design Group carried out the set installation for WLWT, Hearst’s NBC affiliate in Cincinnati, during the height of the pandemic. Most station employees were working remotely, allowing the installation team to work in a secure space. The studio and the set are large, which makes it easier for the news team to choreograph the show and maintain safe distances between news talent.

One of the trends Kathy Skinski, GM for broadcast and media for Planar, has seen around sets during the pandemic has been upgrades as broadcasters take advantage of having fewer people in their facilities.

This is particularly noticeable around the replacing manned cameras with robotic cameras, which enables one person to operate four or five cameras, which reduces the number of people on a set, she says.

Planar is fielding calls for LED floors and ceilings and bigger LED walls.

“Before, they’d have more hardware in the set,” Skinski says. “Now we’re seeing more video, just because it’s so flexible.”

And while prices have come down for LED walls, some broadcasters may be reluctant to purchase today’s LED panels when the technology is changing so rapidly, she says.

And as an example of how quickly LED technology is changing, Skinski points out that it’s now possible to curve the panels. “Whoever thought you could bend LEDs? I don’t think anybody thought that was possible five years ago,” she says.

As far as McLaughlin is concerned, “LED is still the driving force in set design” with screens “getting bigger and bigger” and a push toward seamless tiles.

WRAL Raleigh has a 12-foot high by 20-foot wide video wall. While that’s the biggest video wall FX had done to date with LEDs, McLaughlin says a project they’re installing this month is even bigger. 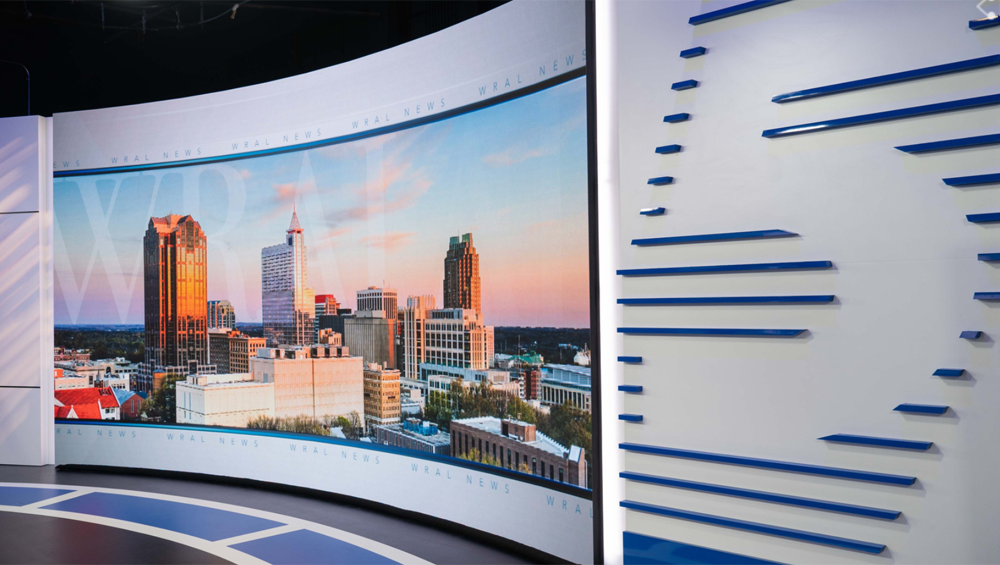 And FX has an even larger one in fabrication in early June; the 360-degree design is 100 feet around.

“Anywhere you look on the set, you’re going to have a full LED or LCD video background behind the reporters,” McLaughlin says. “That’s where we’re going, 100% video equipped where the entire background is video with a few scenic things holding that together.”

AR And VR Make A Comeback

Some years back, McLaughlin says, there had been much anticipation that virtual sets would carry the day, not LED, when it came to set design. It hasn’t happened for a variety of reasons, he says, including “everybody understands how video works” and the fact that virtual systems, being proprietary, aren’t compatible.

“That’s the biggest stumbling block, that they’re not plug and play,” he says.

It looks as though there is some movement in that direction, however, with the Unreal rendering engine.

The price for camera tracking for VR has also dropped, notes Phil Ventre, VP of sports and broadcast for Ncam. “Augmented reality and virtual reality were always seen as the cherry on top of the icing on top of the very expensive cake,” he says.

But that is changing with what Ventre calls the democratization of AR and VR. What could be done cost-effectively for $100,000 a year and a half ago is seven to eight times less expensive now, Ventre says.

As a result, he says, “we’re now in a place where AR and VR can be used at a local level, or right up to the national news.”

And steady improvements in the technology underpinning AR and VR make it so “you can’t tell the difference between what is real and what is not, which allows you to do more in one studio,” Ventre says.

Some broadcasters, he says, are using one studio for eight or nine shows a day, all with different backgrounds, which is cost-effective and flexible.

“With the flick of a switch you can move from a sports studio to a news studio during the commercial” without having to move plants and desks, Ventre says.

In the physical world, there’s a studio control room dedicated to a specific show or workflow, he notes, but a virtual set can be used for anything. If multiple studios are needed, they can be copied and pasted, making it possible to expand the shows a broadcaster is doing.

“It gives you the ability to move things around without being tied into something,” Paquin says.

For a group, virtual studios in different cities can be as similar as possible, making it possible to “share,” he says. Some customers, he adds, buy virtual set templates from Ross and roll out identical, or nearly so, sets. The upside is a reduction in training and setup time.

Virtual sets are now more acceptable to broadcasters facing the reality that they can’t bring talent or guests into the studio due to social distancing requirements, says Gideon Ferber, director of virtual solutions at Ross Video.

“What we see now is more a focus on remote production and the ability to incorporate multiple remote feeds into it, and ways to present multiple talent from multiple locations but without the typical focal point of a desk with the talent,” Ferber says.

For talent working from home but using a virtual studio as the background, Ferber notes there are some challenges, particularly around well-managed lighting.

Even more, he says, the challenge is around workflow for the virtual background.

“You still need to work the entire traditional broadcast pipeline, but in a much more flexible way than before,” Ferber says.