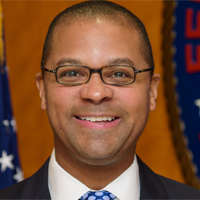 FCC Commissioner Geoffrey Starks today charged that the real purpose of President Trump’s May 28 executive order inviting the FCC regulation of social media companies was to discourage the companies from flagging user posts for “misinformation” during this fall’s election season.

“At its core, the executive order is an attempt to work the refs, and more than that, get them to swallow the whistle,” Starks said in a webinar hosted by the Information Technology and Innovation Foundation.

For the FCC to consider a Trump administration petition during the run-up to the election “risks producing a chilling effect construed to make social media companies less willing to flag misinformation,” he said.

Starks said he believes the FCC lacks the legal authority to regulate social media. If so, he said, “we should say so loud and clear, close the book on this unfortunate detour, and get back to the important work of closing the digital divide.”

The president directed the Commerce Department’s National Telecommunications and Information Administration to deliver its petition for rulemaking to the FCC by the end of July, Starks said. That would mean that the FCC would not collect all comments of the petition until October and so would be unable to act prior to the election.

Starks urged the NTIA to file its petition by the end of this month so, if it is overreach, it could be disposed of well before the election.

“If this is as important as the highest office of the land suggests, then let’s prioritize it and reach a decision as expeditiously as possible for the sake of our democracy.

“While the chairman [Ajit Pai] and I may disagree on the legal merits here I would hope he would agree that the American public deserves our answer this summer and that we should not let this linger during the height of our 2020 elections.”

Starks went on to say that if FCC does proceed with a rulemaking, it should look first at the First Amendment question.

“[W]e shouldn’t lose sight of the fact that the Constitution — not just a statute — protects private actors’ right to label, moderate and otherwise control speech on their platforms.

“The First Amendment allows social media companies to censor content freely, in ways the government never could, and it prohibits the government from retaliating against them for their speech.

“That so much of what the president proposes seems inconsistent with those core principles makes an FCC rulemaking even less desirable.”

Trump’s order came after he expressed outrage that Twitter had flagged a couple of his tweets asserting that mail-in ballots can’t be trusted and directed readers to more information on ballots.

“We will strongly regulate, or close them down, before we can ever allow this to happen. We saw what they attempted to do, and failed, in 2016. We can’t let a more sophisticated version of that … happen again.”

As the executive order sees it, power to regulate social media would derive from Section 230 of a federal law that protects social media from legal action stemming from user posts. The immunity is credited with helping social media to flourish.

To enjoy the immunity, social media have to refrain from interfering with posts except for “good faith” efforts to regulate “obscene, lewd, lascivious, filthy, excessively violent, harassing, or otherwise objectionable.”

In essence, Trump wants the FCC to identify social media that go beyond such good faith efforts and, by so doing, cause them to forfeit their legal immunity.