The outbreak of the COVID-19 pandemic has led stations to remotely create and produce broadcast content like never before. Considerations about a cloud or remote desktop service center on four key factors: Functionality, proximity to a data center, speed and corporate security requirements. Above, the SplashTop application Gray uses affords remote desktop access. The producer is working from home with multiple monitors producing/directing a newscast via a SplashTop connection to computers at the station. Using SplashTop, she is running Ross Remote Overdrive on the large monitor to her left, a multi-viewer video wall on the smaller monitor to her left and ENPS on the laptop in front of her. From her perspective, it feels like those applications are installed locally on her computer/screens at her house.
By Jennifer Pallanich | July 8, 2020 | 8:28 p.m. ET.

When organizations like Gray Television started working remotely due to the COVID-19 pandemic, they had to rely on cloud technology for entire workflows and shows.

Remotely creating and producing broadcast content requires programs with huge processing power and access to on-premises systems, so news organizations needed something like Citrix cloud desktops or SplashTop remote desktops that allows their staff to use those programs and systems as well as to transfer content. Once, virtual private networks (VPNs) solved many remote-access problems, but there are drawbacks to relying on VPNs for the entire workflow.

While cloud desktops solve the problem of remote access, no one tool fits all broadcaster needs for creating and editing content. Desktop services — or hybrid systems — should be chosen based on considerations like functionality and security. Future services will likely feature more automation and capabilities, as certain remote production elements will likely remain in broadcaster workflows after coronavirus lockdowns end.

Gray already used cloud and remote desktops before the pandemic, according to Dave Burke, the company’s chief information security officer. He says the group has already jumped to using a number of cloud-based applications and expects to shift to cloud-based services when contracts come up for renewal.

Because Gray already relied on Citrix and SplashTop, the pandemic prompted “more ramping up of that infrastructure than introducing a brand-new approach,” he says.

The end user, Burke says, just needs an internet connection and a laptop. “They can have a fairly old computer that would never run the app natively, but they can do it because the computing is done on the backend at the data center,” he says. “It’s just like a remote desktop on steroids.”

Because the core users were already accessing the apps via Citrix, “when we went remote, it didn’t affect them,” he says.

But sometimes, the remote worker needs to access systems that are at the studio. In the past, the worker might use a VPN or be forced to work on-site.

“VPNs are a concept that 15 years ago was great, but now it’s a last resort,” Burke says. “When you use a VPN, you inherit the end user’s computer, their network, their connectivity issues, and printing becomes an issue.”

Also, if the computer connected to the TV station has a virus or a worm, it exposes the entire station, he says. Within the station, however, file shares are still on a VPN, he says.

With a bias against VPNs, another method of accessing on-prem systems is necessary.

Gray uses the SplashTop remote desktop app, which is a thin client on the computer that connects directly to a computer at the TV station, allowing the worker to run systems like ENPS, graphics and prompters. With it, the end user feels like they are running the apps locally.

With a remote desktop, “boom, you’re working, and no VPN,” Burke says.

Even so, there are some concerns around costs and resiliency, he says. “Television stations need to be self-sufficient in the worst times. What if a natural disaster blows through and you lose connectivity and it’s all in the cloud? You lose access to everything,” Burke says.

“The more you put stuff in the cloud,” he says, the more critical it is to have multiple internet connections at a station, and ideally at different locations of the facility when possible. 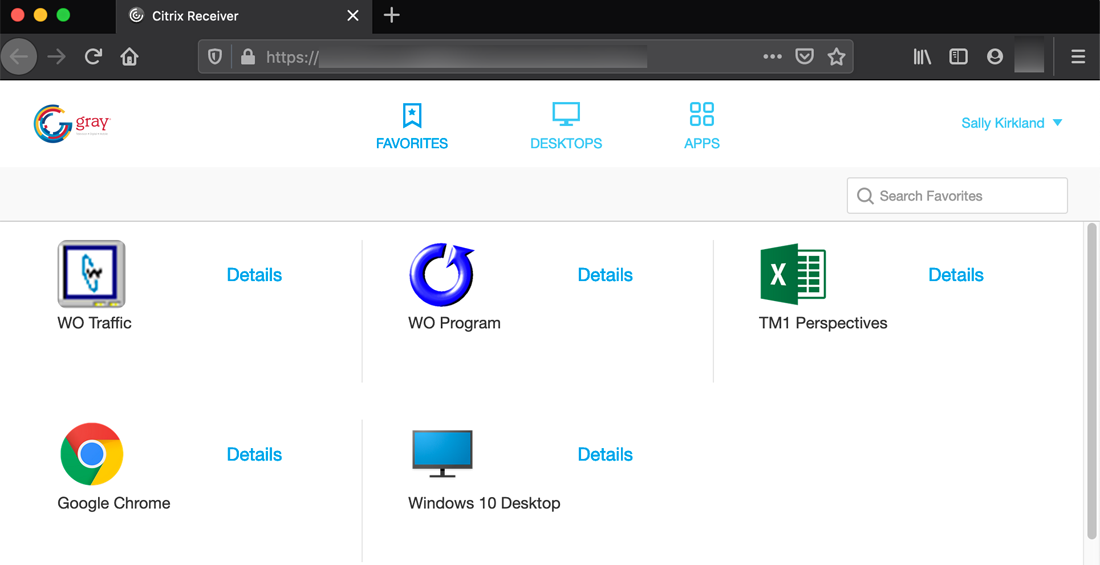 From a Gray employee’s perspective Citrix is a “cloud environment” so all applications feel like they are running on the end user’s computer.

When it comes to broadcast content, Bounds says, “some companies are doing full production in the cloud, or hybrid.” In one such scenario, the editing may be done in the cloud while color may be handled on-prem, he says.

Usman Shakeel, head of solutions architecture for media and entertainment at AWS, says: “It’s not just about the workstations, it’s the whole workflow around it. We’ve seen a few new workflows where customers have invented and simplified.”

One way to simplify, Shakeel says, is to use content lakes, which hold all of the content in a single location.

Considerations about a cloud or remote desktop service center on four key factors, Bounds says. The first is what functionality is needed. Proximity to the data center is key, so locations matter. It wouldn’t be ideal for someone in London editing in the cloud if the data center is on the East Coast of the U.S., he says. “You need to think about where you want to put those users and work stations.”

Speed is another factor.

“In the early days of COVID, they needed to enable people to work from home in the next few days,” Bounds says.

Finally, corporate security criteria come into play. Bounds says these criteria dictate whether single sign-on is possible or if multi-factor authentication is required.

Moving forward, Bounds expects ease of use for these systems to continue improving. “What we’re looking at now is automation,” he says. “We’ll see more and more capabilities, newer GPUs.”

Color correction in the cloud could be on the horizon, as well.

“The other thing we’re really looking at is how to enable these workflows, more on the television side to reduce the number of people on the set,” Bounds says.

The current reliance on cloud-based technologies in an effort to keep people working but remotely required “a culture shift” for broadcasters, Shakeel says.

“In normal times, somebody would think twice, saying, ‘Can I rely on Zoom?’ But customers are more tolerant. There’s no other alternative at this point,” Shakeel says. It was “something that nobody was willing to take the next step for. But for good or bad, I think this new way of doing things has enabled the industry to think that way.”

Burke says that while Gray has been a strong proponent of virtualization, “if we’d had this conversation five years ago, you would have gotten different answers.”

With the experience gained with remote production relying on cloud and remote desktops, “nobody’s going to revert to how we were before the pandemic,” Burke says. “The practices, workflows and technologies that have been put in place will continue.”