Broadcasters won’t be hampered by remote working conditions for election night 2020, and they have a bevy of new graphics and augmented reality tools to help them tell the story. Above, Broadcasters can make complex data easy for viewers to grasp through augmented reality objects generated by Brainstorm graphics using real-time data from different sources. A Punt, a regional channel in Spain, covered municipal elections, and this interactive map shows the winning party in each town, with detailed results for the seats won in each town are shown on the chart of the left side. The bars on the bottom show a rundown of all the cities, in alphabetical order, with the results in real time.
By Jennifer Pallanich | August 27, 2020 | 10:00 a.m. ET.

As broadcasters prepare to report the U.S. elections with next-level graphics despite work-from-home conditions, vendors are offering easy-to-use templates that can integrate real-time data.

Graphics vendors are relying on powerful 3D rendering engines, but given the ongoing social distancing guidelines associated with the COVID-19 pandemic, they have increasingly made it possible for broadcast employees to work remotely yet collaboratively.

Fox News has been preparing for the election season and election night for months.

“Election night is kind of our Super Bowl,” says Alan Komissaroff, SVP of news and politics at Fox News. “We spend a lot of time and do a lot of planning pretty far out.”

Fox News has been working to take its coverage and graphics “to the next level,” he says. “We try to up our game a little bit from each election cycle.”

As a result, he says, the cable network has explored different technologies on offer from different vendors, although he doesn’t want to tip his hand, graphically speaking, ahead of election night 2020.

“During the primaries and the lead-up to where we are now, we’ve done the usual tool kit” with big screens, monitors, race boards and delegate trackers to help visually tell the election story, Komissaroff says. 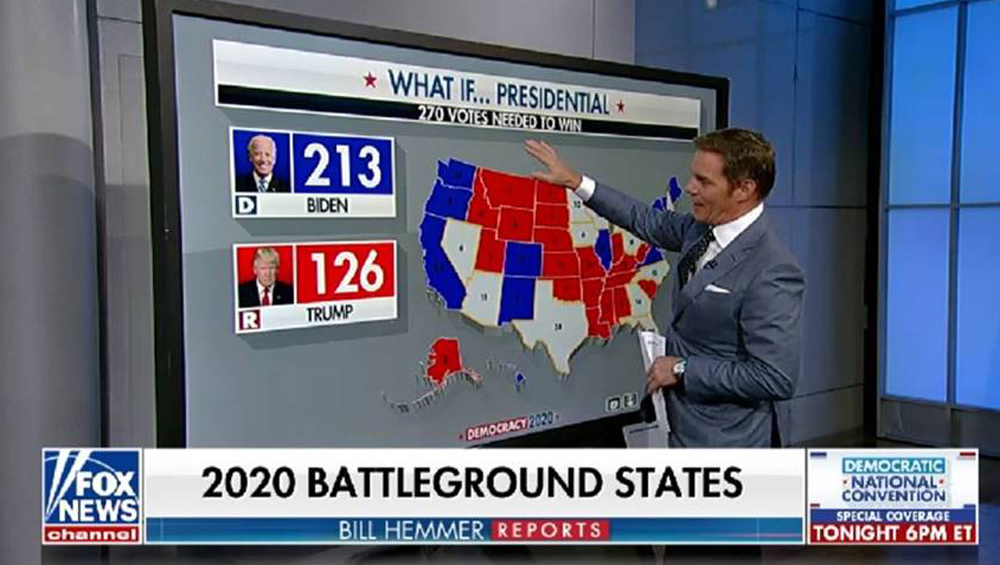 Fox News Channel’s Bill Hemmer with an interactive screen on Aug. 17, the first day of the Democratic National Convention.

Fox News has traditionally been on the “bleeding edge” of graphics, he says, using immersive graphics and race boards to reflect information from all over the country, such as state races and results, battleground states, polls and electoral votes.

This year, the team is “trying to take that up a notch as well,” he says.

In August, Fox News’ Bill Hemmer debuted an interactive screen that will be used throughout the remainder of the election season.

“There’s a lot you can do with that when you apply that to news and the data you get from elections,” he says. “It’s pretty limitless what you can do.”

At the same time, Fox News isn’t finding COVID-19 social distancing requirements to be putting a crimp in its ability to put together graphics for this election season, he says. Even working remotely, the media production group is “still pumping out an amazing amount of graphics and fulfilling requests,” Komissaroff says.

The group, which has a small footprint in the Fox building, is using Zoom and is “still able to put out a really good product and make sure it’s even better for that night specifically.”

Vendors are keen on ensuring broadcasters can provide visually stunning graphics that incorporate the latest real-time data for their viewers during the election season,

ChyronHego’s new version of the PRIME platform integrates AR components and makes it possible to integrate real-time data into the graphics. The 3D graphics can appear on stage next to the talent to help tell better stories. In the context of the election, a graphics template can be automatically populated with election results data.

“This drastically speeds up their ability to put up these graphics on air,” Mathieu Yerle, ChyronHego VP of strategy and chief of staff, says. “The complex data turns into something that to the audience looks simple enough.”

Broadcasters use the PRIME platform for branding, election coverage and animating video walls and touch screens.

“They’re all looking for ways to create more immersive graphics, to make stories more attractive for the audience,” Yerle says. “A lot of creative work has been put into designing stunning graphics.”

Ray Ratliff, Vizrt’s director of pre-sales, says one of the most important trends this election cycle is photorealism in augmented reality. That photorealism has “been a long and hard pursuit” for companies specializing in AR and virtual studios, he says.

Vizrt’s Engine 4 can produce photorealistic AR graphics and virtual sets without having to use the Unreal gaming rendering engine, he says.

Engine 4 is easier for broadcasters to use to create election graphics than Unreal, he says, because of a plug-in pack and workflows that make data visualization fast and easy.

“Photorealism is no longer relegated to the world of the game render engine,” Ratliff says.

Charts can pop into the studio space from LED floors for the hosts to interact with before sinking back into the floor once their usefulness has passed, he says.

“Customers are using depth monitors with augmented reality,” Ratliff says. “The augmented reality object pops out and breaks this barrier between the video wall and jumps into the 3D space in the studio.”

Aside from being visually appealing, such graphics serve another purpose, he says. “They extend the floor space of the studio without investing money to open up floors and ceilings.”

Given the need for social distancing and quarantining, Ross Video is offering XPression Elect-It!, which is a centralized web server aimed at streamlining collaboration. Pre-built graphics packages are available, Patrick Twomey, director of product management and business development – Xpression at Ross Video, says. Race results can easily be plugged into the graphics.

Access to existing graphics packages can be helpful given remote workflows, Twomey says. More so, such graphics can be helpful for local affiliates in the process of migrating between graphics vendors after the 2018 election.

Typically, he says, local affiliates can repurpose and adapt graphic content from a previous election since viewers haven’t seen those graphics in two years. If, however, the affiliate has changed graphics vendors since the last election, they may not have access to the previous election graphics. In that case, he says, Ross Video’s Rocket Surgery “is a solid solution” that can help with graphic creation.

“We’ve seen an increase in requests for just creative services,” says Gideon Ferber, director, product management and business development, Ross Virtual Solution. “Our customers are asking for help to differentiate themselves from their local competitors.” 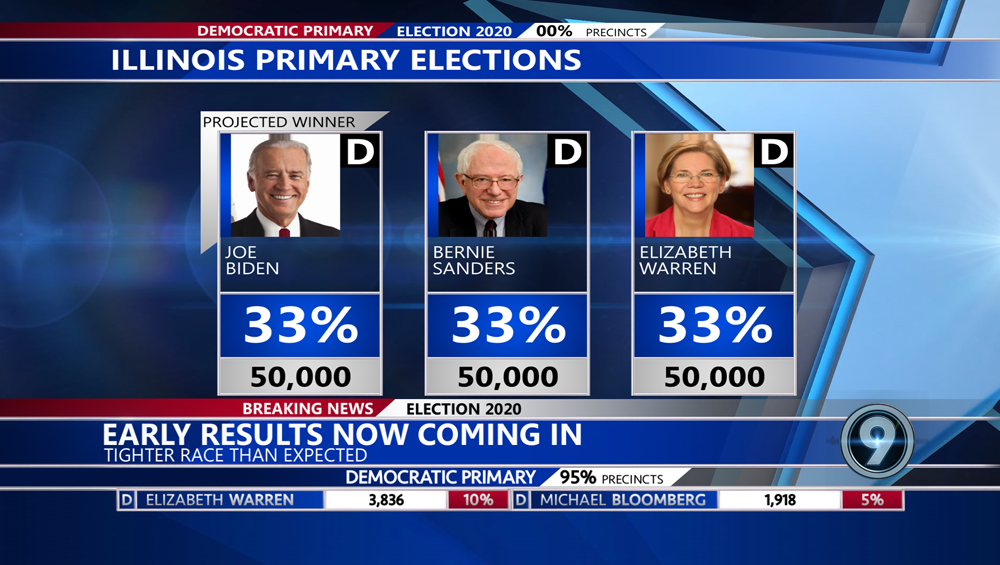 To that end, he says, many broadcasters are seeking advice about how to make themselves stand out while using traditional graphics tools. “It’s all about telling a better story and visualizing data.”

Overall, he says, Ross Video has seen an increase in requests for AR graphics compared to virtual reality. Ferber believes one reason is that AR is simpler to produce because it’s not necessary to deal with green screens and customized lighting.

And graphics “make the audience able to understand what is going on,” says Miguel Churruca, marketing and communications director at Brainstorm.

Previous elections have featured complex graphics, with “spectacularity of the program a must-have,” Churruca says. Given the pandemic environment, broadcasters may focus more on flexibility while still demanding high-end real-time graphics, he says.

Brainstorm offers simple template systems that a single user can use to create graphics, he says.

The good thing about that, he says, is that it allows smaller channels and broadcasters that don’t have the resources to create bespoke election programs to gain access to a number of templates. Those templates can link to original sources for election data, and once the real-time data is in the template, it can draw the graphics accordingly, he says.

Bringing automation into the graphics workflow was part of the reason Dalet released its CubeNG solution for graphics. Dalet CubeNG, powered by the Brainstorm real-time graphics engine, was originally released last year. The latest version, Dalet CubeNG Cloud, can run via the cloud, allowing for remote workflows and is integrated into the Dalet Galaxy newsroom production system. 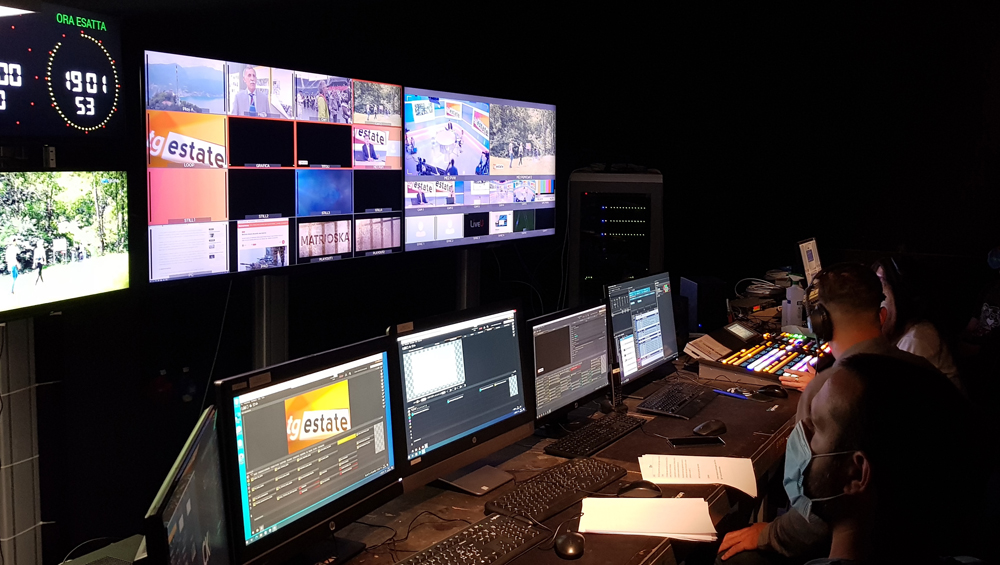 “You can actually use the graphics inside the Dalet Galaxy system. You will be able to either do some distribution workflow to build graphic on top of video, or to preview the graphics that you want to play out, to do some last-minute changes at every step of the workflow,” says Jérémy Krein, Dalet CubeNG product manager. “We have a lot of different ways to manage the playout of graphics.”

For elections, Krein says, it’s important for the rendering engine to be able to create maps and complex charts and to show dynamic animations of election forecasts.

“With the Dalet CubeNG designer and the Brainstorm designer, you can build those complex graphics that you need for an election,” he says.

In the end, though, Ross’ Twomey says, it’s important for broadcasters to remember that the average viewer mostly cares about one thing on election night: “Did their candidate win?”