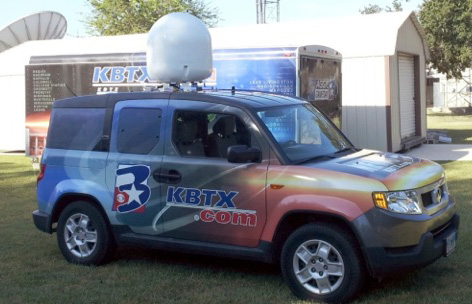 The station group’s IP-based GrayMax Hotspot system is designed to provide the reliability of a microwave truck without the telescoping mast, and the newsgathering freedom of bonded cellular technology without the worry of being knocked off the air by cellular congestion. It’s being tested at Gray’s KBTX Bryan, Texas.

The FCC has issued an experimental license to Gray Television that will let the station group test its home-brewed GrayMax Hotspot system over the Broadcast Auxiliary Service (BAS) band for the next two years.

The IP-based GrayMax Hotspot system, which has been in development the past two years, aims to provide the reliability of a microwave truck without the telescoping mast, and the newsgathering freedom of bonded cellular technology without the worry of being knocked off the air due to cellular congestion.

“It’s a reinvented approach to ENG,” says Jim Ocon, Gray VP of technology. “This is entirely about newsgathering. This is about why we have a BAS frequency for broadcasters to use.”

With GrayMax, IP signals are sent from a steerable antenna mounted under a dome on a newsgathering vehicle, like a small SUV, to strategically placed base stations with 18-inch antennas that relay the signals back to the TV station.

In most small to mid-size markets, four base stations would be sufficient to blanket the market. With the help of GPS, an operator in the vehicle should be able to lock into one of the base antennas with the push of a button. (He can also override the GPS and rotate the doom antenna with a joystick.)

Unlike traditional microwave trucks, GrayMax allows for two-way voice communication between the vehicle and station.

For the past several months, KBTX Bryan, Texas (DMA 88), has tested GrayMax using unlicensed frequencies in the 5-7 GHz range at low power. The experimental license will let it test the system over the 2 GHz BAS spectrum, and at significantly higher power.

“What we don’t know is if the performance will be affected using the lower frequency, but our folks working on this tell us — on paper — we can achieve even greater performance and throughput,” Ocon says.

The station installed the dome on a Honda Element and placed four base antennas on top of Kyle Field, where A&M plays.

“We’ve received some great reaction from people driving by, wondering what that dome is on top of the vehicle,” says Swearingen. “But we used it for six football games this year and it was very easy and reliable. It gave our journalists a true mobile newsroom.”

Before GrayMax, KBTX needed to use two BAS channels for A&M football games — one to air the live show outside the stadium and one to send back footage from within the stadium. “With [GrayMax], we can use just one channel on the same frequency to do both,” says Peter Gogas, an engineer at KBTX.

Once tests begin on the BAS spectrum, Ocon says KBTX will need to coordinate with the other local stations to ensure GrayMax doesn’t interfere with their newsgathering plans. Tests over BAS won’t start right away, as Gray needs to work with other vendors on the 2 GHz gear.

Ocon says it could cost as little as $80,000 to assemble a system, with the vehicle being the largest single expense. Ocon declined to comment which vendors KBTX used during the initial testing phase.

GrayMax isn’t limited to just a vehicle. Ocon says the technology could be configured into a backpack. “I can see them having a receiver and transmitter as part of their little backpack setup, and they’re walking around with the same hotspot,” says Ocon. “The vehicle, though, is sort of a tracking system, where it will track on a cell and will allow you to have communication while you’re driving to a story.

“I think what’s kind of cool, if you’re heading off to the next story, you can use this system to upload, or FTP, the stuff you just shot back to the station servers.”

The timing of GrayMax works for the broadcasting industry, which needs another argument for preserving its BAS spectrum.

In March, the wireless industry asked the FCC to consider BAS spectrum for commercial reallocation. From the letter: “This spectrum band is below 3 GHz, is contiguous and adjacent to current allocations, and would allow pairing in a readily achievable fashion…. The wireless industry is at a critical crossroads — the long-warned spectrum shortage is at an inflection point.”

If the GrayMax tests over the BAS spectrum prove successful, Ocon says he will work with the FCC and other broadcasters on changing the rules of BAS to accommodate the system.

“We want to develop an open standard … and roll it out to other markets to get greater analytics for the FCC — to show how it performs in other markets with different terrains,” he says. “Bryan makes for a good first choice because of Texas A&M being there and showing how we can overcome problems like cellular congestion at a football game.”

“The newsgathering business is a moving target and the bottom line is it’s not the same as it was yesterday. What we’re trying to do is be ahead of the curve. We’re streamlining the process of gathering news and improving our ability to do that.”

Andrew Dodson is the Technology Editor for TVNewsCheck. Follow him on Twitter @AndrewDodson He can be reached at [email protected] and 303-800-4581.