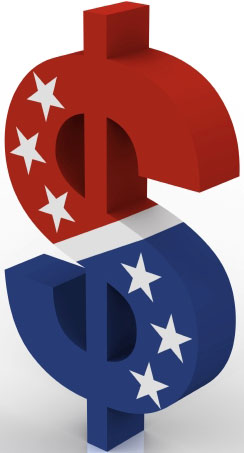 With an increasing number of viable alternatives, local broadcasters need to get more aggressive in wooing political advertisers to continue getting their portion of the total spend.

“TV stations across the country have gotten kind of lazy,” said Jim Innocenzi, a founding partner of the political advertising firm Sandler-Innocenzi. “I think the local TV stations have to go out there and bump their hump a little more.”

Panelists said they expect to see even more political ad spending in 2016 than in 2012, during which local broadcasters saw $3 billion in political money. And while that may mean more money for local TV, the medium is still losing a percentage of its share of political money, particularly to digital platforms and cable, they said.

In turn, local TV has to step it up a notch to maintain its share, they said, which means providing campaigns more viewing data. “We are hungry for information on your viewers,” said John Brabender, chief creative officer of the political media firm BrabenderCox.

How local broadcasters will fare in 2016 will also depend on whether the presidential election boils down to just a few swing states, like it did last year. There will likely be more spending in primary season due to the lack of an incumbent candidate, they said.

The panelists themselves come from a range of experience and politics — as well as positive and negative campaigning — starting the discussion showcasing some of the ads they helped create in 2012. Those ranged from one featuring a Mitt Romney lookalike shooting an automatic weapon at then-opponent Rick Santorum. An Obama ad featured strides the president had made during his first term in office.

Lorena Chambers, the only Latina and one of only two women to produce broadcast commercials for any presidential campaign, admitted taking pleasure in her series of 12 ads aimed at Hispanics that featured clips of Romney saying things like immigrants “are looking for a free deal.”

“I love doing negative ads,” she said. “And it was straight negative.”

If i ran this country Political advertising on TV and Radio would be OUTLAWED, and the penalty would be DEATH. I HATE Even-Numbered Years, and I HATE them with a SWASTIKA. If I could travel through time I’d SKIP all even-numbered years.

Hate to break the news to you, but we don’t care what you think either.