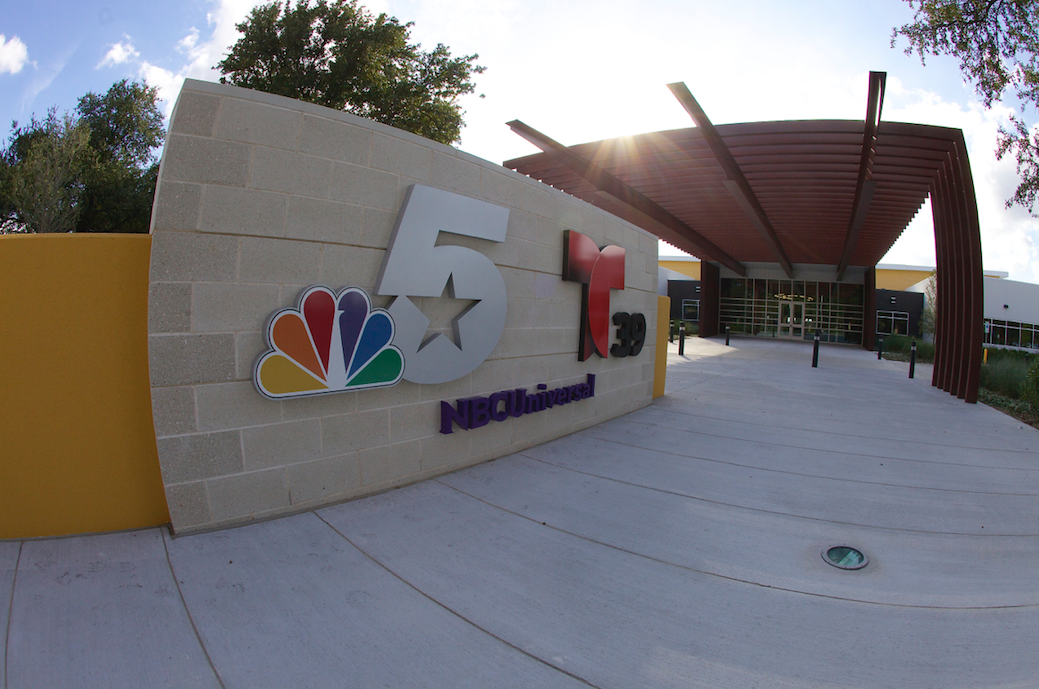 Christmas came early for the staff at the NBC Dallas O&O and its co-owned Telemundo outlet on Sept. 30, when the ribbon was cut on a brand new, 75,000-square-foot complex located in a business park near Dallas-Fort Worth International Airport. Among the wish-list items the staff got are news editing flexibility, traffic and sales finally in the same building as news and technical flexibility to handle all the various feeds, especially since everything from the studio to the field is now in high definition.

For the past few years, Matt Varney, VP of technology at KXAS Dallas, has doubled as the station’s Santa Claus, asking everyone from reporters to engineers what they would include on their wish list for a brand new station.

Reporters wanted flexibility in accessing content and editing software from anywhere at the station. Management wanted traffic and sales under the same roof as the news operation. Engineers wanted hundreds of multiviewers scattered throughout the building to monitor the countless feeds coming in. KXTX, the Telemundo sister station that has shared a building with KXAS, needed to go HD. And the KXAS weather team desired some new, tech-savvy tools and a little extra room to stretch their legs.

Christmas came early for the staff at the NBC O&O on Sept. 30, when the ribbon was cut on a brand new, 75,000-square-foot complex located in a business park near Dallas-Fort Worth International Airport. Staff began moving into the new building, called The Studios at DFW, earlier this month and the stations and NBC’s Dallas news bureau hope to go on air from newly designed sets in early November.

“We mapped out everything that we knew we wanted,” Varney says. “These drawings couldn’t include any specific vendors, only boxes that did this, or boxes that did that. Once the concept was designed, we got to work, and here we are today in a great new building.”

Take a closer look inside The Studios At DFW on Playout, the technology blog of TVNewsCheck.

TI Broadcast Solutions Group was the integrator for the multi-million dollar project.

“KXAS had been in the same facility for more than 60 years,” says Michael Wright, president of TI Broadcast Solutions Group. “The last thing they wanted to do was anything traditional.”

The top priority, in terms of technology, was making sure reporters and producers had the flexibility to grab any content from any source and get it on air as quickly as possible, Varney says.  To accomplish that, the station went with Grass Valley’s Stratus, an all-in-one media asset management and newsroom production suite.

“All content is housed and accessed here,” Varney says, adding that the station previously didn’t use software to manage assets.

Stratus manages content by configuring bins and folders based on a station’s workflow. It lets staff access high-resolution video or proxies for previews and collaborate on stories, by letting users send messages and attachments among each other, and pick up where they left off from any workstation.

All content is stored in a massive, 4,000-square-foot in-house data center that today features about 500 terabytes of storage powered by EMC Isilon. Varney says the data center was critical to the station’s new workflow because it allows for easy expansion of storage and bandwidth.

“We might need 400 terabytes today, but another 200 tomorrow,” he says. “This was built to handle everything we have today and for everything that we don’t even know we need in the future.”

That type of storage will be needed for the amount of high-definition content coming into the station.

KXAS has been broadcasting in HD for some time now, but only 16:9 standard definition from the field. Field crews, who come into the office in the morning for an assignment and then edit and FTP completed stories back to the station, will work in HD, and all live shots off microwave and bonded cellular will do the same.

KXTX, NBC’s Telemundo outlet in the market, will now broadcast its 14 hours of news each week in HD. The channel was updated with Ross Overdrive automation and Sony HD cameras.

The new facility’s core infrastructure — the routers and audio console — is shared between the KXAS, KXTS and NBC News bureau control rooms. The facility uses a 572×1,176 Miranda router with hybrid audio.

So, instead of specifically putting 10 mics in one studio and 10 mics in another studio, the station has 20 mics on the router that are available to anyone, no matter where people are using them.

“The same thing holds true with the monitor walls and the switchers,” Varney says. “Everything comes in and hits the router and everything is fed by the router, so it’s not a matter of having to say, I need these 64 inputs put on production switcher in control room 1 and these 64 on the production switcher in control room 2, you have 500-plus to pick from; route up what you need today.”

Scattered throughout the building are 350 Samsung monitors that are playing hundreds of IP-based video sources coming into the building, including live shots in the field.

“We’re a media business and everyone wants to see what’s going on,” Varney says. “We took all of our signals and built a cable headend, similar to what Verizon FIOS does, but it’s all IP-based.”

In addition to the hundreds of monitors throughout the facility, anyone at a desktop computer can build their own multiviewer on-screen, giving them an opportunity to see feeds that would typically be available only in a control room.

KXTS and KXTX will broadcast from newly designed sets by PDG Jack Morton. Both set designs were approached in a similar fashion to the technology that’s inside the building, says Varney.

“A lot of people don’t look at the fact that a set is a tool to aid in storytelling,” he says. “We took something that is typically an artistic process and made it really methodical.”

KXAS paid tribute to Harold Taft — its first and one of TV’s original meteorologists, who was known as “the world’s greatest weatherman” — by constructing a weather center that is nearly as big as the main anchor desk area.

“Weather is what we do,” Varney says. “We’re a huge metropolitan area in the middle of tornado alley, so it’s really important to us.”

From the weather center, meteorologists have access to all weather-related signals, be it a live shot from a storm chaser or a remote camera somewhere in the coverage area, and four different types of radar. From stage right, the weather center includes a traditional green screen, followed by a weather office that gives access to the video signals and radars, followed by what’s being called an expert desk that includes a 16-element monitor wall display. To the left of the expert desk are two Sharp 80-inch touchscreens running AccuWeather’s StoryTeller platform and its weather and traffic apps.

KXAS’s main anchor desk area accommodates up to five people and includes a 3×5 monitor array behind it. Broadcast designer Joe Lamberta says he used stone columns and lighter woods throughout the set to give it a warmer feel.

“That feel helps contrast it with the technology that was brought in with it,” he says.

The set also has LED lights built into the walls that can change color, allowing the station to differentiate morning and evening newscasts, Lamberta says.

Lamberta also designed KXTX’s set and used similar color palettes to KXAS to show that the two are sister stations. The new set is twice the size of the old one and has an oval-look throughout it.

“We wanted to show this engaging feeling,” Lamberta says. “There aren’t any hard corners and every area tends to flow into the next area really nicely.”

No matter how good the technology is inside the new facility, nothing can make a major TV station as efficient as having everyone under the same roof, says Tom Ehlman, president-GM of KXAS and KXTX.

“When I came here five years ago, I thought it was an interesting situation that sales and traffic were 35 miles away from the news operation,” Ehlman says. “It worked for us, but I thought having everybody in one building would be ideal.”

Employees on the business side of the operation have started moving into the new facility and rehearsals on the new side have been going on for a few weeks.

“It’s definitely the talk of the newsroom,” Ehlman says. “People are very excited about it and appreciative of the fact that NBC supported such a big project.”