Mining The Gold In Your Videotape Archives 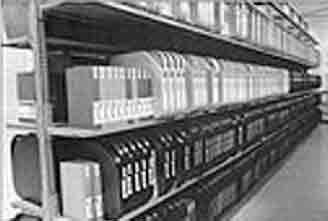 If your station has rows and racks and piles of old  videotapes, you have a storage expense that you can turn into an asset. The reasons to digitize archived news videotape are based on value, the score that businesses use in deciding to act. So where’s the potential value in digitizing the videotape library? There are at least eight great reasons, including providing valuable legacy content for both on air and online.

Recently I was following a TV station engineer into his chilly, dry basement. We had nearly reached our destination when I thought I heard a song. It seemed familiar.

But the words were different…

“Newcasts? I asked. “Yup.” How long have these been here? “Since we converted from film to tape 30 years ago.” What are you going to do with them? “No idea. I just babysit them. Keep them at 72 degrees and 50% humidity. Would love to get rid of them. Would love to have the space back. Would love to turn off the HVAC I’m paying for.”

Surprisingly, this is still a common scenario for many commercial stations. They have, at least, kept their legacy videotape. It sits on shelves in newsrooms and hallways and warehouses and garages. A station collection typically includes three generations of tape formats, from ¾” to ½” to ¼,” covering 30 years of community history. For some stations, that’s more than 20,000 hours of content.

So I ask: who will decide to digitize some of this? News? Programming? Digital? The answer is always the same: “Corporate. They’ve got to push this down and approve the spending. At the station, if there’s a choice between migrating tape versus leasing the news copter, the copter wins.”

So I check with folks at “Corporate,” at least on the engineering side. Some corporate groups know there’s value in the tape content. Either they’ve already rationalized their stations’ tape collections, culling and digitizing and tossing, or they’re looking for good metadata tools to help them out. At other groups — the tape is an orphan.

Meanwhile, the urgency to act on the tape is increasing. Top issue: there is a finite number of “playback hours” on the world’s remaining VTRs, most of which are no longer supported by manufacturers. Next: videotape is not a storage medium. It inevitably deteriorates, and will eventually become unplayable. Third, producers and editors old enough to know well what’s in station libraries are approaching retirement age. When they leave, invaluable library “indexes” are lost. And, of course, storing tape mandates space resources and HVAC expenses.

The reasons to digitize the tape are based on value, the score that businesses use in deciding to act. So where’s the potential value in digitizing the videotape library? There are at least eight great reasons:

Migrating the videotape recovers content that is owned, branded and local. Libraries featuring station news include content that is well-positioned for on air and on-line use. Stations have ownership rights they can work with; station branding is built in; and, of course, the topics relate to the local station and Web audience.

New software tools are enabling robust metadata creation. The main problem with tape archives is the lack of metadata. No metadata, no archive. Last December, Cox’s WSB in Atlanta announced that it had digitized its news archive and indexed it using Dialoque Search software from Nexidia. The software can find specific words or phrases within entire media libraries, enabling fast searches for specific topics and quick retrieval of the relevant video. Other emerging software tools can do facial and voice recognition, scene analysis; and identification of graphics and closed captions.

Library content in newscasts can reduce news costs. Library content can be repackaged and dropped into newscasts as “story updates,” “then-and-now” segments, lookbacks at similar weather events, etc. Integrating a minute or more of legacy content into daily newscasts could save up to the cost of a reporter.

Station websites can get a treasure trove of new content. Stories with “evergreen” topics can be cycled through the website, capturing more visitors and page visits. Here in Denver, Gannett’s KUSA hosts an engaging “Storytellers” page on its website featuring a rotation of legacy stories.

New uses are emerging for legacy content. As tablets replace textbooks in the classroom, multimedia educational apps are shopping for reality video to document historical trends and events. Thus, stations are discovering that they can sell stock newscast footage. And some stations have earned tax writeoffs — and kudos — by donating station video collections to museums and universities.

The “app” explosion will continue and get hungrier. Station mobile apps can show you what’s happening now. I guarantee that those apps will evolve to let you watch what was happening “then,” exploiting the fact that station archives represent video histories of their communities. Those apps will need to be built on stations’ legacy content.

The digitized archives can be shared across companies. By hosting their archives in the cloud, stations can share their archives with all the group stations and affiliates. That’s spreading the wealth.

Your CFO might love you. Ask your CFO: Why are we not digitizing our videotape? On the balance sheet, with storage and AC costs, it’s a liability. When digitized, it has value on air and on-line, thus becoming an asset (and: increasing shareholder value). Yup, gold mind found. What’s not to like about that?

And the digitization process? The more work you do up front, the more value you’ll get back. Key steps: create a migration team; decide how to value tape content (create a scoring system, most important to least, then score all the tapes); confirm metadata capture and output tools; get budget approval; upgrade network storage, and arrange to digitize.

And maybe, once you’re in the tape library to get this started, you’ll be humming…

Greg DePrez works with Alteran Technologies, a division of JP Claude Inc. in Chatsworth, Calif. Alteran develops simple and sustainable workflow solutions for videotape migration, digital asset management, and systems integration for enterprise organizations. Its other divisions include Broadcaststore.com and B&B Systems. DePrez can be reached at [email protected] or 818-235-2101.

If you had a method of selling old video – even raw unedited – to the public, they would buy it. A great search engine is a must. Locally there was a breaking story, and they were able to find relavent video of the same criminal in their archives from 2006 – so that was neat that they were able to do that. Don’t wait until your hardware dies either. I had audio recorded on a Digital Compact Cassette recorder in the 90’s – the tapes survived, but my deck has died and now I’m trying to find a working DCC deck, so don’t wait to digitize, IMO.