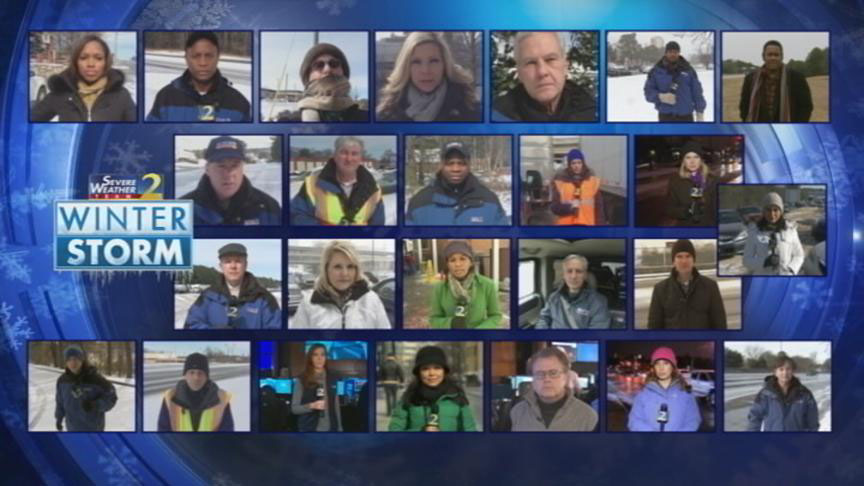 No one was more surprised than WSB Atlanta News Director Mike Dreaden that a graphic with thumbnail images of 25 on-site reporters used during the Cox station’s coverage of last week’s crippling snow storm in Atlanta would draw so much online attention.

Interest only seemed to grow once Comedy Central’s The Daily Show with Jon Stewart decided to spoof the graphic “as a 25 news box pileup” and have some fun with it. (The bit occurs 6:16 into the Jan. 30. episode.)

“This whole thing is kind of funny,” Dreaden says. “We aren’t used to seeing something like this develop. That 25 news box kind of went viral. It went everywhere, getting attention all over the country. Stewart was the culmination of how it took on a life of its own.”

For Dreaden, however, the attention given to graphic has been misplaced. The truly noteworthy thing about the news box is that it graphically demonstrated the ABC affiliate’s technical and logistical prowess, he says. “I was proud of it because it showed the scope of our coverage.”

The snowstorm that struck Atlanta the night of Jan. 28-29 deposited only a couple of inches of snow on the metro. But the timing was such that it was enough to bring the city and surrounding areas to a screeching halt. The storm left students hunkered down to sleep in their schools overnight, delayed thousands of motorists stranded for up to 30 hours on ice-slick highways and was responsible for at least a dozen traffic fatalities.

The WSB graphic, which first appeared on the station’s 4 p.m. newscast Jan. 29, was actually produced before the show. “Not everyone was actually live at the moment we went to air with the news box,” Dreaden says. “We do not have the ability to do 25 live shots simultaneously.”

But the station had 25 reporters in the field ready to go live at any moment, Dreaden says. WSB used the news box to establish its presence in the field then switched to graphics with bullet points and text highlighting closings and other important storm news before anchors starting throwing the coverage to any one of the 25 reporters for a live update.

For the production, WSB relied on a mix of technologies. The station deployed 13 ENG trucks with 2GHz Broadcast Auxiliary Service digital COFDM radios and four LiveU bonded cellular uplinks to cover the storm. The remaining reporters in the field relied on iPhones and other wireless devices to contribute live shots.

WSB wasn’t alone in maxing out its ENG coverage of the storm, saysGary Rogers, a transmitter engineer for WPCH, the Turner Broadcasting station in Atlanta, and the Society of Broadcast Engineers’ frequency coordinator for microwave transmission above 1GHz in the metro area.

“During the storm, I just kept watching all of the channels and everything was working,” Rogers says. “It went pretty smoothly. I never got a call from anybody.”

“There were a lot of live shots going on,” he add. “The stations had every single one of their vans on the road, many in the same place.”

Rogers credits the band plan that has been in place since the 2GHz BAS service went live on seven channels in Atlanta. “They all have their [2GHz] channels in place, and each station covers all of their live needs with those channels.”

Area broadcasters are cooperative, he says. “It is pretty amazing how well it works in Atlanta. Everyone has learned to minimize power so they only have enough power to get over the threshold needed to get a good signal back to the station. That helps as well.”

The key to pulling off WSB’s 25-person coverage of the snowstorm was preparation, Dreaden says. “We had planned for something like this. We had everybody spread out the night before to get into the locations where we thought the snow could be bad so we weren’t getting stuck trying to reach the key points where we wanted to be live.”

With so many viewers now equipped to watch the station’s storm coverage app on their smartphones, tablets and even Dyle TV mobile television receivers, WSB’s ambitious coverage had a way to reach people caught in the clutches of the storm, Dreaden says.

“This story came along at a time when we are feeling pleased with our progress on digital platforms,” he says. “We were ready to flex our muscles to be strong on the Web, social media and mobile.”

“It was unbelievable the feedback we got from people watching our streaming coverage while stuck in traffic not moving on the freeway,” he says. “Quite literally, we had a captive audience of people who were struck and wanted to know what their prospects were of getting out of this mess.”

Of course FormerGM and others will call this Weather Hype instead of really covering the News. Atlanta/Birmingham are great examples of why Weather Warnings are not hype. Even the Mayor of Atlanta & Governor of Georgia admitted they were unprepared. And look what happened. Pretty hard to call Weather Hype after the Weather stories of the past few weeks.

How did you keep a straight face as you typed your comment. A full-screen with 25 reporter stills (does WSB even HAVE 25 reporters?) isn’t just hype… it’s laughable hype. I’m sorry, exactly how much snow and/or ice fell in Atlanta? True, the mayor and governor were unprepared. THAT was the story… not the weather itself. And how many of those 25 reporters were at city hall or the state capitol building trying to get to the bottom of the problems? That, unfortunately, was an after-thought. It’s no wonder so many TV “news” clips end up on Comedy Central and the opening monologues of the late night talk shows. TV news has become a joke.

Nancy cleary you don’t know who WSB-TV is and how they own the market with a lion share. Their parent company owns the radio/tv station and newspaper. Yes they have more than 25 reporters or more on the street. They have a city hall reporter Lori Geary who does many city hall and state reports. They have a website so you should take a gander and look at the videos and do your homework to know about this station. Nancy, girl go sit down and drink some coffee.