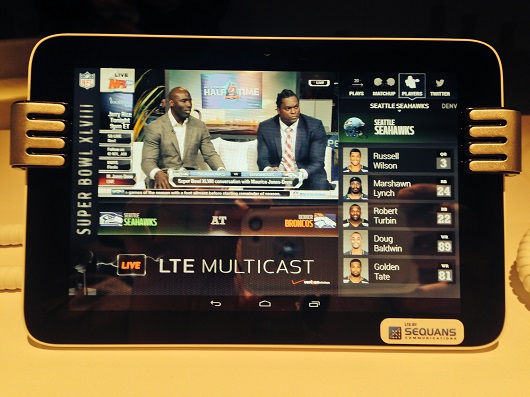 Verizon's new offering in development, LTE Multicast, will use broadcasting's one-to-many model to deliver video to mobile devices. Although the service is still a long way off, broadcasters see it as a threat and are responding in part by pushing forward with the development of a next-generation broadcasting system through the Advanced Television Systems Committee.

Verizon has begun to demo a new approach to delivering video over its vast LTE wireless broadband network that will allow it to mimic and compete with broadcasting.

For its most recent demonstration of the technology, Verizon transmitted multiple camera angles of race coverage from the Indianapolis 500 to some crew members in the pit at the track. The wireless carrier used an undisclosed number of cell sites near the Indianapolis Motor Speedway for the demo.

The crews, which were given Samsung Galaxy Note 3 smartphones and Sequans tablets enhanced with special LTE Multicast chipsets to receive the Verizon broadcast, used the devices to view specific camera angles of the race and give their drivers a tactical advantage.

The Indy trial of LTE Multicast follows its rollout at a special technology showing in New York City’s Bryant Park as part of the festivities surrounding Super Bowl XLVIII on Feb. 2.

Verizon envisions rolling out LTE Multicast nationally and competing head to head with broadcasting and other purveyors of live, linear TV.

Verizon CEO Lowell McAdam laid out the strategy during his keynote at the 2013 International CES. “With LTE Broadcast, we’ll be able to stream to everybody over the same channel at the same time,” he said. “This will give content owners new ways to reach their audiences, whether it be for sports, for concerts or even college classes.

“Our goal is to break down the barriers between home and mobile once and for all and come up with new video services that can move seamlessly across any platform and any device.”

But first come the baby steps.

Verizon, which has signed on with IndyCar for a multi-year sponsorship, plans demos of LTE Multicast at at least four more IndyCar races this season, says Lewis.

The demos will likely be followed by a limited rollout, perhaps in a few markets, to wring out any problems, says Philip Solis, research director at ABI Research. “You keep expanding who you are offering it to to solve the glitches without having a national failure.”

Lewis sees LTE Multicast being used to reach large numbers of customers gathered in one place such as a stadium, raceway or even college campus, without diminishing the data and telephony functionality in the area.

“But there are lots of other potential business cases to be made for LTE Multicast when you think of content providers,” she says. One example could be transmitting lectures from a super-star professor at one campus to thousands of students at other colleges, she says.

Ericsson, which calls its part of the multicast ecosystem “LTE Broadcast,” says the technology is better than previous approaches because it leverages OFDMA (orthogonal frequency-division multiple access) and wider bandwidth available via LTE.

“The technology starts to provide network-capacity advantages over unicast in a cell with as few as one to four concurrent users, depending on the deployment characteristics,” Ericsson says in a white paper describing the technology.

Rick Herman, chief strategy officer at MobiTV, says LTE Multicast is clearly based on the broadcasting model. “What you are trying to do is rely on traditional broadcasting methods to deliver QoS [quality of service], but doing it in a newfangled way with new gear,” he says.

Deploying LTE Multicast on the transmission side is simple and straightforward, says Lewis. All that is required is software at the cell site, she says.

The receive side of the LTE Multicast equation is more troublesome. Existing devices cannot receive the service, says Lewis. Chipsets devoted to LTE Multicast reception will be needed in a next generation of smartphones and tablets to make the new service a reality.

That will be no small task. The LTE network covers nearly 98% of the U.S. population and, at the end of the first quarter of 2014, there were 92.5 million LTE subscribers with incompatible devices, says Marina Lu, an analyst specializing in the wireless market at ABI Research.

“To deploy a nationwide, multichannel network with sufficient channels to interest the general public is a different story,” says Adrick. “Certainly you are going to have additional transport requirements to get content to the base stations.”

Adrick also contends that if the LTE network is offered nationwide, there will come a point where any unicast spectrum savings realized through the one-to-many broadcast model will be exceeded by the spectrum needed to broadcast content.

“Thus, you are going to have the need for additional transmission capability because multiple channels will impair the individual cell site to deliver data and telephony,” he says.

Broadcasters see the Verizon threat and are responding in part by pushing forward with the development of a next-generation broadcasting system through the Advanced Television Systems Committee.

Within the past month, the ATSC has begun placing additional focus on the mobile aspect of the standard at the request of several broadcasters and the NAB.

“It is clear that in the future we have laid out for us that the wireless carriers wish to be our primary competitor,” says Mark Aitken, VP of advanced technology at Sinclair Broadcast Group. “We have said this repeatedly over the past many years: We are at war with the wireless carriers.

“And the contemplated build-out by carriers of broadcast networks on spectrum to be gained from broadcasters at auction paints a very clear picture.”

Yeah, just like broadcast TV but without any of the public interest obligations.

Exactly, how does this serve the public convenience, safety and interest? Is it free? I didn’t think so. Hey Verizon, AT&T and you other bandwidth squatters – “how’s it working for you” on all that bandwidth that you already own and aren’t using, but want more? Sows.