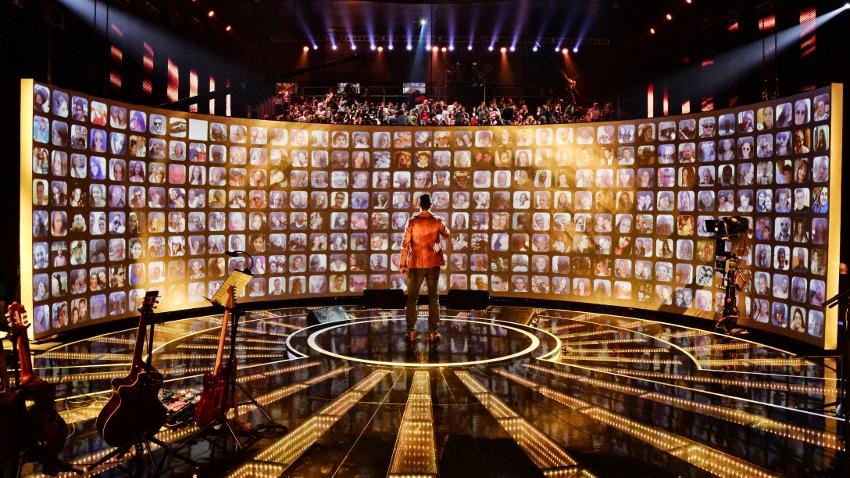 A new app for smartphones and tablets lets viewers of the new ABC talent series vote in real time during the live broadcast to determine whether singers move on to the next round or go home. The technology making this real-time audience interaction possible is Screenz’ Real Time Platform, a cloud-based solution that in testing has demonstrated the ability to process more than 100 million interactions per minute.

A new app for smartphones and tablets that lets viewers vote in real time during the live broadcast to determine whether singers move on to the next round or go home delivered a breakthrough performance for the melding of television with interactive technology.

The app, available for iOS, Windows and Android devices, is essentially the instant digital equivalent of a Roman Coliseum thumbs-up or thumbs-down sans the emperor and the bloody aftermath.

To vote, viewers simply log in when prompted by show host Josh Groban and swipe their second screens to the left or the right to pass judgment. Votes are tabulated in real time and drive an animated thermometer-like graphic that reflects the growing votes.

If a performer achieves a 70% favorable vote — the combined votes of viewers and three super-voters, country music singer Brad Paisley, electro/pop singer Kesha and hip-hop artist and actor Ludacris — a rising star is born and the contestant advances.

The technology making this real-time audience interaction possible is Screenz’ Real Time Platform, a cloud-based software solution that in testing has demonstrated the ability to process more than 100 million interactions per minute.

For the premiere of Rising Star, more than one million people downloaded the app and they cast more than five million real-time votes, according to Keshet DCP, a joint venture between Keshet International and dick clark productions, which is producing the show in the United States.

One of the most dramatic aspects of Rising Star is a giant circular wall that surrounds contestants as they perform and only lifts to reveal the singer to the studio audience when the performance achieves a 70 percent favorable vote.

Here too, the Screenz Real Time Platform enhances viewer engagement with the show. Viewers downloading the app are required to register with ABC via their Facebook page or Twitter account. When they are, they are asked whether producers may use their profile pictures.

So, as they vote, the profile pictures begin to appear on a semicircular video wall portion of the enclosure so the singer and home viewers see the faces of some of viewers casting favorable votes as the performance is delivered.

Having the ability to drive real-time viewer participation with a show offers a number of benefits, Uzan says in a Google Cloud Platform blog posting.  “It increases the number of viewers engaging with the show, the social buzz, and pushes up audience numbers at time of the live broadcast.”

Kechet International, the worldwide distribution and production arm of Kechet Media Group, has sold the Rising Star format in more than 25 countries after the show made a highly successful debut on Israel’s Channel 2 in the fall of 2013. ABC’s launch of the show follows similar debuts of the format in Brazil and Portugal.

The benefits of the second-screen interactivity to TV programming aren’t confined to entertainment shows, however.

Gordon Borrell, CEO of Williamsburg, Va.-based local media ad consultancy Borrell Associates, says there may be some valuable lessons local television news operations can take away from the sort of viewer interactivity employed by Rising Star.

“If you can imagine for many stations 15 years ago, they didn’t know who their viewers were,” he says. “They assumed lots of people were watching if they read the Nielsen ratings, but they didn’t have a single name or address of the people watching their station.”

The takeaway for stations from Rising Star is the importance of giving viewers an incentive to participate in a way that requires them to register who they are and their email addresses, Borrell says.

Getting people to register might be as simple as offering the chance to get their picture on the news with a video clip or weather photo they submit, he says.

“I think a more important aspect of this from a business or financial standpoint for these stations is that this interactivity (the type used for Rising Star) leads to contact information from viewers, which can lead to more significant revenues” Borrell says.

Using interactivity to collect contact information also gives stations the chance to build one-on-one relationships with viewers, something they’ve never before had, he adds.

To Jaime Spencer, VP of Frank N. Magid Associates, the relevance of the interactivity on display during Rising Star for local newsrooms is that viewers experienced the satisfaction of having a completed communications loop.

“Listening enables opportunity,” says Spencer, who has had a focus on social media, interactivity and second-screen opportunities for broadcasters at Magid.

Rising Star gave viewers a way submit their input in the form of a vote and receive immediate response from the show, which completed the communications roundtrip.

Local TV news operations can apply that lesson to their social media interactions with viewers, says Spencer. “Social media is a circle and not a line,” he says. “You must make sure you are listening and responding.”

Spencer also notes that with Rising Star ABC created a social experience for viewers, a reason for them to participate in something together.

“I think ABC realized live television is going to drive more success if you can make it an event that people can watch together with the help of social voting options,” he says. “It’s like watching a sporting event. You want to be a part of it.”

This show has three (3) Major Problems! Number 1, the pace of the show is way too slow. 2 hours and only 10 auditions (of which 6 passed)? Give me a Break! By contrast, 2 hours of “The Voice” has anywhere between 16 to 20 auditions. Number 2, not everyone has a Smartphone, or Tablet, so they have no ability to vote yes or no on these contestants. I am one of many who are not able to vote because we don’t have (and can’t afford) these items. Number 3, why is there a backstory for each contestant; that is so a waste of time. You would have time for more auditions if you weren’t wasting time on that crap. If “Rising Star” doesn’t change, I probably will stop watching it.

Episode 2 had 12 auditions, but the same stuff I complained about last week, still happened this week. You know, ABC, you NEED to list a phone number so that the REST of America (those without Smartphones or Tablets) can vote!