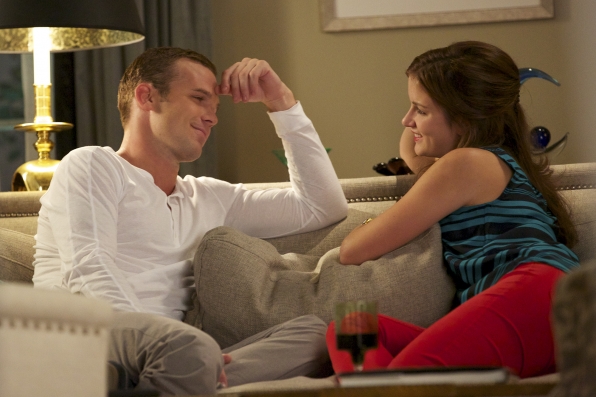 The group says scenes in the June 29 show at 9/8 p.m. ET/CT “constitute a violation of the broadcast indecency law due to the patently offensive sexual content airing when children are likely to be in the audience. It is even more troubling that CBS chose to rate the episode as appropriate for 14-year-old children.”

The Parents Television Council is calling on its members and others to file indecency complaints to the FCC over a recent episode of CBS’s Reckless that the group says contained explicit sexual content.

PTC says the TV-14 (SLV)-rated episode aired on June 29 at 9 p.m. ET and 8 p.m. CT/MT and included these scenes: “The episode opened with a woman being pulled over by a police officer and handcuffed to a fence while the officer and the woman had sex. Another scene showed a male attorney watching a video of a woman who was purportedly drugged and then undressed and sexually assaulted by four men on the hood of a police car. In another scene, the same attorney and a female attorney watch the same video of the sexual assault together and subsequently talked about how it turned them on.”

In a statement, PTC President Tim Winter said: “We believe these sexually explicit scenes … constitute a violation of the broadcast indecency law due to the patently offensive sexual content airing when children are likely to be in the audience. It is even more troubling that CBS chose to rate the episode as appropriate for 14-year-old children. This is just the latest example of the strained credibility of the TV content rating system.

“CBS must be held accountable for using the publicly owned airwaves to beam to every home in the nation repeated graphic depictions of a woman ostensibly being sexually assaulted. As such, we are asking members and others concerned about how TV impacts children to file FCC indecency complaints over this episode,” Winter added.

That’s right, PTC, keep trying to justify your pathetic existence with an occasional PR of outrage. We often times forget you exist.

That’s right, D BP, PTC needs to go out of business. PETA, too as well.

You will notice that CBS has scheduled Reckless in at 10PM and moved Unforgettable to 9PM starting this coming Sunday.

Hey PTC, the public does not own the airwaves, you’re thinking of PBS. Also, TV has no impact on ANYONE!!!!

The family dynamics and the family unit are changing, NOT going away. I applaud a group who is trying to uphold some element of family values in our culture today. After all, the shootings we see on the news every night stem from a lack of family support. But of course, if families were improved and violence decreased, stations would have to go back to investigative journalism and no police scanner news and the bean counters, bankers and wall street investors have cut the true reporting budgets. I see what the above gripes are about.

Yes, TV is too blame, LOL! If you are a parent and do not want kids to see this, exercise control and use the off switch. Quit expecting Government to be your Nanny! Perhaps actually spending time with your family instead of pawning them off to TV will stem the decline of the family unit you speak of.

SalesGal, viewers with families are perfectly capable of voting with their remotes with regards to violent network shows and are doing so. Many such shows are either off the air, such as “Kingpin” after one season, or are suffering from low ratings such as “Hannibal.” What we don’t want to see is the infantilization of TV network programming as producers refrain from tackling serious subjects in a frank way because they fear mandated censorship or a return of the Catholic National Legion of Decency with its lists of unacceptable programs and pressure on the networks to conform to their personal standards. We need to continue to give viewers the freedom to choose what to watch and trust that they will make the right choices for themselves and their families.

You are right. I just wanted to try to keep viewers eyeballs with broadcast TV nets and stations. I think balance can be attainable for both parties with the 7p hour being family friendly and the 10p hour being adult action packed (CST times). After all, the 10p hour is the News lead in hour so you do want your big gun there. And honestly, Full House was infantile on abc’s TGIF but kids still watch it today on NICK so good content is good content.

After reading the article about this show, yikes. But let the audience decide its fate, not the PTC.