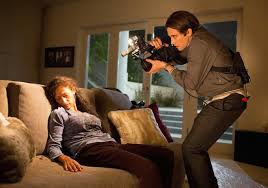 While a new movie portrays TV stations as eager clients of renegade photogs peddeling gory footage, the reality is most crime coverage is restrained. And the decisions that go into determining where the line take into account viewer sensibilities. “I think the boundaries of good taste are set by the audience as much as anybody. If you really started showing abhorrent images, I don’t think you’d have viewers for a very long time,” says RTDNA's Mike Cavender.

The local news director he works for, played by Rene Russo, can’t get enough of the stuff — the more gruesome the better — in hopes that the gore will pull her station out of last place. She tells Bloom to “think of our newscast as a screaming woman running down the street with her throat cut.”

Pure fiction, say those who actually makes their livings bringing back images and stories for the local TV news each day.

Although there have been times when the medium was a bit bloodier, TV news today is pretty sanitized, produced with sensitivity to both viewers and victims, local TV news people say.

“Nobody has to see pools of blood while they are eating dinner,” veteran WCBS New York reporter Lou Young whom I buttonholed at a Westchester coffee shop.

“The mainstream media has gotten much more conservative in all respects,” Young said. “Overall, video is fairly sanitized.”

And while TV newsrooms still use overnight stringers (although the practice has declined since the industry became a 24-hour-a-day business) they generally don’t hire sociopaths.

Gauntt, who has covered big events like the Oklahoma City bombings, and has worked in cities including Philadelphia and Washington that have plenty of crime to cover, says that is how most stations operate in the markets she’s been in.

“There are occasionally rogue guys who think gory video is good,” says Gauntt, adding that viewers who stumble upon a crime or accident scenes also occasionally send video too gruesome to air. “But they figure out quickly no one pays for it.”

Mikel Schaefer, news director at WVUE, the Louisiana Media Co.-owned Fox affiliate in New Orleans, says his station is “very sensitive to the viewers when there is any kind of gory content visually,” and weighs all footage that could push the limits on a case-by-case basis.

“We don’t want to show bodies in the street,” he says.

But, as Schaefer says, that kind of decision making applies to more than just crime and accident stories.

For instance, when four people were infected with dangerous flesh-eating bacteria last summer after swimming off the Louisiana coast (one died), Schaefer says his team debated whether to show pictures of the wounds caused by the disease. The story ultimately included several pictures showing the lesions, one of which was blurred.

“You don’t want to show really gross pictures, but you also want to give people the reality,” he says.

Schaefer says making those kind of decisions is part of the daily editorial process involving a cross-section of journalists who evaluate everything from street crime shots to network packages covering global conflicts.

“It’s a tough call deciding how far you go,” Schaefer says. “Sometimes you don’t want to whitewash the reality of war too much because it can affect how people think about it.”

Some broadcasters concede that local TV has played a role in fostering their reputation for hyping gore, even if they don’t show it.

“Everybody loves the cop chase. It appeals to our baseline obsession with real-life drama,” says Brett Shipp, the longtime investigative reporter at WFAA, Gannett’s Dallas ABC affiliate. “The question is whether this crap is driving people away [from TV news] or saving us from extinction?”

Shipp says even a station like WFAA, which has mastered “long-form, quality journalism,” airs trumped up crime stories.

Two weeks ago, Shipp says he was about to open a newscast with a story about a charity allegedly taking money from wounded veterans — “a story rich with detail, documentation, emotion and greed, a story that will hopefully make a difference in veterans’ lives down the road” — when he heard he’d be delayed by “breaking news just into the Channel 8 newsroom.”

“Someone was stabbed by someone at some mall,” Shipp says. “I sighed, and rolled my eyes, and waited my turn.”

Mike Cavender, RTDNA executive director, says there is a distinction between covering gore and covering “run-of-the-mill” crimes and accidents, which a number of stations do with gusto.

But that doesn’t mean stations will stray into the macabre.

“It’s never really been a blood and guts issue,” he says. “I think the boundaries of good taste are set by the audience as much as anybody. If you really started showing abhorrent images, I don’t think you’d have viewers for a very long time.”

Yet there still is a bit of morbid mystique surrounding covering crime, particularly on the graveyard shift.

Kevin Johnson, a TV photographer with Cox Media’s Washington bureau, says that when he worked for a Norfolk, Va., TV station in the 1990s, there was pressure on photographers to bring back jarring shots.

“[Newsroom managers] wanted to have a white sheet over a body,” Johnson says. “That was important to them.”

Johnson says that as a staff photographer he competed with several stringers in the market (one guy drove around with his dog in a beat-up station wagon) who listened to police scanners in hopes of being first to crime and accident scenes.

“They would always be kind of irked when we showed up because that meant their money went away unless something else exciting happened,” he says.

Those kind of scenarios are why WCBS’s Young calls the gig “very interesting and strange and a hard way to make a living.

“There’s always been a romanticism surrounding it, but it is not romantic,” he says. “It’s one of those jobs that sounds like fun until you do it.”