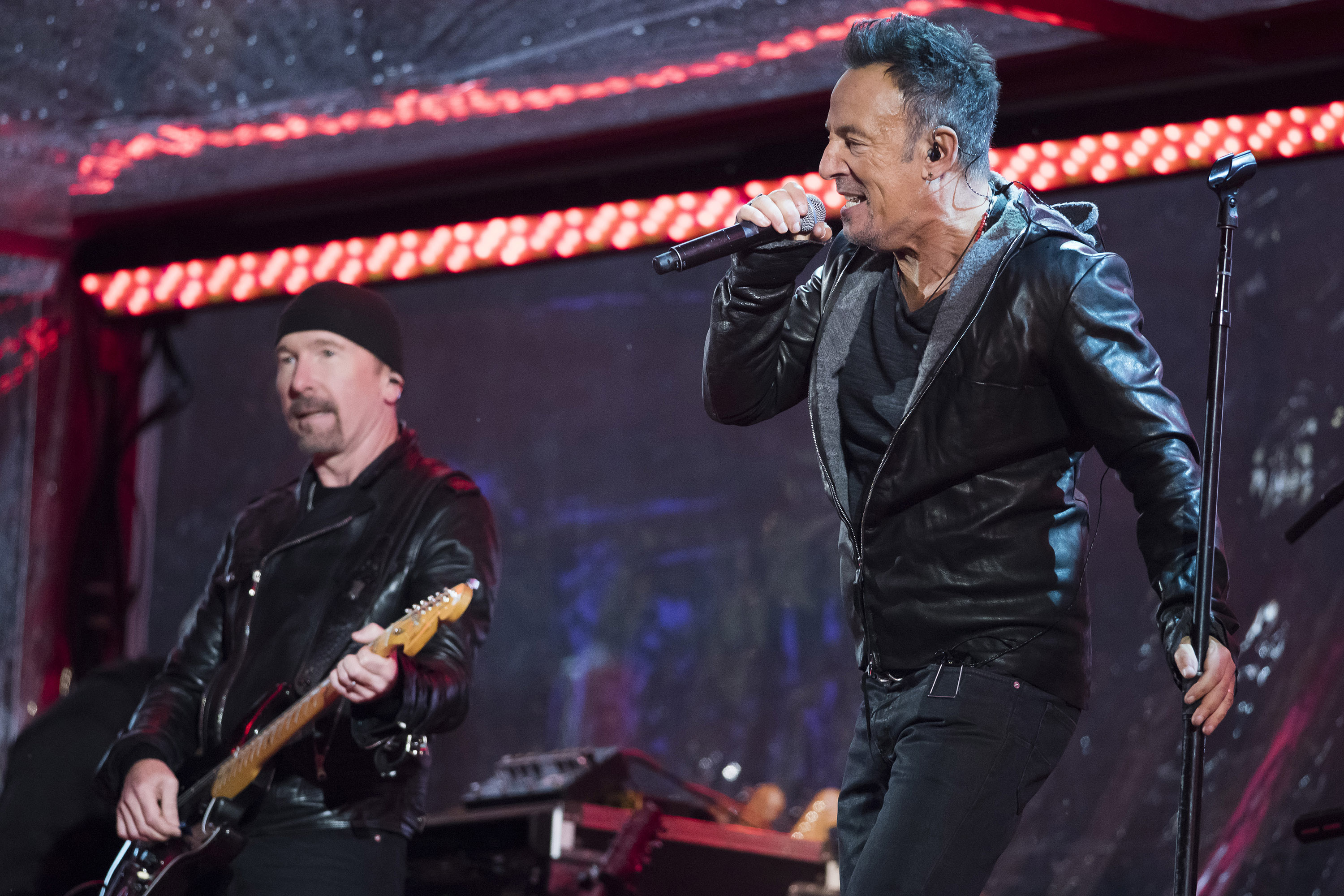 After the FCC conducts its incentive auction of 600 MHz TV spectrum in early 2016, the amount of available spectrum for wireless mic operation — in diminishing supply now — could become even scarcer. Less spectrum means fewer unused TV channels for wireless mics and a whole series of other wireless devices generally lumped into the wireless mic category, including wireless intercoms, IFB cueing systems and in-ear monitors used by musicians and other entertainers. In addition, switching to new equipment could be costly for broadcasters. (Photo: AP/Charles Sykes)

The crowd on hand Monday evening (Dec. 1) to see a World AIDS Day concert put on by a Bono-less U2 fronted by Bruce Springsteen and Cold Play’s Chris Martin wasn’t the only thing tightly packed in New York City’s Times Square.

The airwaves dedicated to wireless mic systems used by the performers and production crew were so jammed that concert organizers called Louis Libin, SBE frequency coordinator for spectrum under 1GHz in New York City, mere hours before the event desperately looking for any bit of spectrum that could be enlisted to provide a measure of relief.

“It’s just insane in Times Square because there is so little available wireless mic spectrum,” Libin. “It became very painful Monday night. We had to do a lot of jumping around and finding out [what spectrum was available at any given moment] and do real-time frequency coordination.”

The concert, billed as “U2 Minus 1 — Live in New York Tonight” due to Bono’s inability to perform following a bike accident, is just one of the most recent examples of how difficult it is becoming to find available frequency for wireless mics. “This issue is nationwide, and things aren’t going to get any easier after the repack,” Libin says.

For applications like ENG as well as sports and entertainment production, broadcasters generally use wireless mics that operate on the unused UHF TV channels in each market.

After the FCC conducts its incentive auction of 600 MHz TV spectrum in early 2016, the TV stations will be repacked into a tighter band, which will have the effect of congesting the remaining UHF TV band even further.

Less spectrum means fewer unused TV channels for wireless mics and a whole series of other wireless devices generally lumped into the wireless mic category, including wireless intercoms, IFB cueing systems and in-ear monitors used by musicians and other entertainers.

“Any NFL game will use more than 100 wireless microphones, and those 100 wireless mics all need spectrum. Typically that broadcast will use eight, 10 or 12 television channels to operate those mics,” he says.

The other major TV-related use of wireless mics is ENG, which is far different from how the devices are used for sports and entertainment productions. Unlike those applications, ENG is spontaneous, not scheduled, which means making provisions for temporary use of available spectrum is impractical. Similarly, news can occur anywhere, whereas the venue of a sporting or entertainment event is known far in advance.

To guarantee there is at least some spectrum for wireless mics used for these random newsgathering situations, the FCC has reserved two 6 MHz TV channels in each market, although the specific channels vary from market to market.

However, all of this will change following the TV spectrum repack, says Shure spokesman Mark Brunner. Gone will be most of the unused 600 MHz spectrum as well as the two channels dedicated to ENG wireless mic use.

In place of those two channels will be a yet-to-be determined portion of the so-called 12 MHz duplex gap being created to separate uplink and downlink cellular signals.

“A portion of this duplex gap will be dedicated nationwide to broadcast licensees, and that will be the same set of frequencies, hopefully, nationwide,” Brunner says. “That was kind of a big victory [for the broadcast community].”

However, Sennheiser is concerned the duplex gap will be unreliable, Ciaubelli says. Tests the company conducted in Europe of a similar duplex gap revealed the unused spectrum between the cellular uplink and downlink channels is subject to a lot of out-of-band emissions.

“By its definition, the duplex gap is a buffer zone so the uplink and downlink don’t interfere with each other. Our fear is that operating in the duplex gap will not give professionals the reliability they need, especially for spontaneous newsgathering,” Ciaubelli adds.

In September, the FCC adopted a Notice of Proposed Rulemaking seeking guidance on how it can accommodate the long-term needs of licensed wireless mic users, including TV broadcasters, broadcast networks and TV program and motion picture producers, as well as unlicensed users, such as churches, local theater companies and others, in a post-repack environment.

The 83-page notice seeks comment on a variety of topics, such as new bands that can be used, ways to provide better access to remaining unused TV channels and bands dedicated for use by other devices that can be shared by wireless mics.

One alternative under consideration is relaxation of some existing rules that could make the VHF band more suitable for wireless mics, Brunner says. “The high portion of 900 MHz is used exclusively by broadcasters now. There’s a potential to expand that from today’s 944-952 MHz to 941-960 MHz.

“There’s also discussion of the 1.4 GHz band, which is used often under special transmission authority for sporting events. That’s actually federally held spectrum that is used for aviation testing, but at specific locations, not nationwide,” he says.

While pleased that expanded use of 1.4 GHz is on the table, Ciaubelli points out that using the higher band has its drawbacks.

“It takes five times more power. If you had a transmitter operating in UHF at 100 mw that could transmit a half of mile, you basically need 500 mw of output power to operate a 1.4 GHz wireless mic at that same distance,” he says. “For a lot of applications that will be fine, but for certain uses it is a distinct disadvantage.”

The TV band repack and subsequent dislocation of wireless mics from unused 600 MHz UHF channels will take a financial toll on broadcasters. Ciaubelli says the change to post-repack wireless mic allocations will make obsolete at least half of broadcasters’ existing systems.

Both Sennheiser and Shure have filed petitions with the FCC asking the agency to ensure broadcasters are compensated for wireless mic systems that will be affected by these changes.

“We are asking the FCC to invoke their Title III authority like they did in the past to compel auction winners to pay incumbents, such as in the case of Sprint-Nextel in the 2GHz BAS transition,” Ciaubelli says.

“We feel that to single out wireless microphone owners to be subjected to such an expense is, quite frankly, unfair.”

In the past with analog NTSC and FCC UHF taboos there was plenty of unused UHF TV spectrum in urban areas.

That is no longer true and and “idle” UHF spectrum will get scarce and demand for spectrum expands, witness the $40 bids now on the AWS-3 auction. Wake up and smell the coffee! UHF spectrum is now very valuable. Yet the wireless mic community clings to decades old technology.

Taylor Swift famously said “music should not be free”. Yet the music industry and the Part 74 broadcast crowd believes that their access to spectrum with dated technology should be permitted without any cost indefinitely.

Furthermore, dedicated wireless mic spectrum with very limited eligibility (e.g. Part 73 licensees, Hollywood, and >50 wireless mic systems) will result in spectrum utilization in time and space that will be negligible at a time when demand for spectrum use are exploding.

This is really a worn out argument that has no basis. Manhattan was purchased for $24. Alaska was purchased for $7.2M. Should we pay more in 2015 because of seller remorse? Just as deals were done years ago, the same was done with Broadcasting. For years these operations lost money. They paid the price. No one operating these facilities today got them for free. Stop the tired argument, because there has been plenty paid for these operations.

More co-lateral damage from the auction. I’ve already thrown away one expensive wireless mic system because it operated in the upper 700 low 800 MHz band. So seeking compensation, as Sennheiser and Shure are trying to do, is not unreasonable but, more then likely, futile. The FCC whines or brags (depending on the context) of how complex this incentive auction is. Has it ever occurred to anyone that it might be needlessly complex…like unnecessary? Last year Commissioner Pai proposed that the FCC clear a small portion of UHF spectrum, offer compensation to either vacate or channel share to a select number of stations in targeted DMAs, repack the other stations and have one forward auction. Within the cleared spectrum would be space for wireless mics and other non-broadcast spectrum users within a duplex gap or guard band. It was a simple idea which was probably why it was never seriously considered.

This is all about BIG money. Wireless mics don’t generate big bucks, so they, along with the public, are going to get screwed.