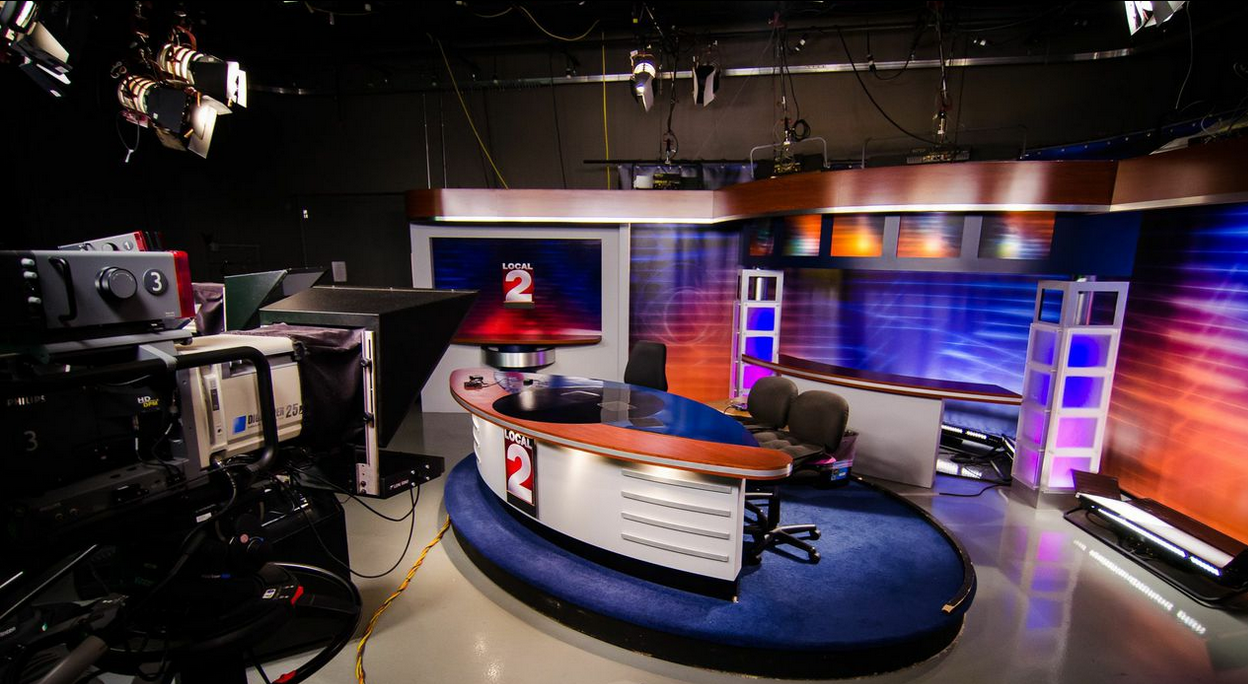 News-Press & Gazette has created broadcast centers in Yuma, Palm Springs and Santa Barbara that enable it to produce newscasts for multiple stations in those markets, sometimes simultaneously.

A new News-Press & Gazette broadcast center in Yuma, Ariz., is the latest of three new small-market television facilities the station group has brought online within the past 18 months that produce local newscasts, some of which air at the same time, for multiple stations with different network affiliations.

For the past two months, the station group has used the Yuma broadcast center to produce local newscasts for Big Four network affiliates — the Fox and ABC affiliates on its own full-power KECY, and the NBC and CBS affiliates on stations owned by Blackhawk Broadcasting, KYMA and KSWT, respectively.

“What we’ve done is create broadcast centers for media production, and as a consequence we are preserving the individual brands and editorial content,” he says.

By consolidating the stations’ newsrooms and creating a common pool of reporters and news photographers in the new broadcast center, the new facilities have more reporting resources than any of the individual stations previously had, but fewer production and operations personnel, DeChant says.

The net result is the market maintains the number of distinct editorial voices it had before the consolidation — something that would have been unlikely without it — while reducing the overall expense of producing news, he says.

“It is up to the individual producer and individual anchors as to how they interpret and present that unique voice to the public,” he adds.

The Yuma broadcast center is one of three the station group has introduced over the past 18 months that produce local newscasts for different network-branded stations at the same time. The other two — one in Santa Barbara, Calif., and the group’s first and most complex in Palm Springs, Calif. — were designed with the same goal in mind as the Yuma facility.

In Santa Barbara, the station group produces news for its own KEYT (ABC) and KKFX-CA (Fox) as well as for KCOY (CBS), which is owned by Cowles Publishing and is operated by the group under a shared services agreement.

In Palm Springs, the group produces news for its full-power ABC affiliate KESQ and CBS affiliate on a KESQ digital subchannel, as well as for Fox and Telemundo on two low-power stations, KDFX-CA and KUNA-LP, respectively.

While there are difference in the video and audio production technology deployed at each, all of the broadcast centers have been built in a way that makes it possible to put at least two differently branded local news shows on air at the same time.

For example, in Yuma the station group uses NewTek TriCaster-generated virtual sets to ensure each of the four differently branded local newscasts has its own look. In Santa Barbara, one virtual set and one hard set are deployed to accomplish the same goal for three different brands of local news. In Palm Springs, two hard sets designed by FX Design Group have moving pieces and backgrounds that can be changed for different brands with the flip of a switch, DeChant says.

“The technical challenge became how do you turn around — in some cases in 90 seconds — from one studio to another in the same control room, cleanly, effortlessly and without mistakes,” Utter says.

Closely related was finding ways to simplify operating the equipment needed to put differently branded newscasts on air because both markets are small — Palm Springs is DMA 148 and Santa Barbara-Santa Maria-San Luis Obispo is DMA 122.

“We have a myriad of skill levels,” DeChant says. “Some are very astute, and some are learning. So we do everything we can to develop a standard and then preset and be able to recall those presets across the board.”

“The same is the case with the Miranda, now Grass Valley, Kaleido multiviewer because you are sitting in one control room, and now you need to see cameras from a different studio. We put that on a one-button-push control panel as we also did with the RTS Adam intercom,” says Utter.

To handle the different audio mixing requirements of each newscast, News-Press & Gazette selected a Wheatstone Evolution 6 console — a model of mixer designed for use by radio stations — for the two TV news control rooms in Palm Springs, Utter says.

An important reason for selecting a radio console is simplicity in operation. “It all boils down to how comprehensive of a feature set the customer wants to give an operator access to,” says Brad Harrison, domestic sales engineer at Wheatstone.

“What the operator is left with on the consoles is an on/off switch, a slider for level control and a few buttons to change the presets and pushbuttons to change the master configuration, Utter explains. “But all of the in-depth control, which could easily break something or make IFBs [interruptible foldback] stop working, is hidden from the operator.”

With the consolidated news operations, presetting IFBs on the console smooths out what otherwise could be a rough spot in the field.

“They have their CBS anchors and ABC anchors, and they like to keep them separate for brand identity, but they share reporters in the field,” says Utter.

As a result the same reporter might do a live standup with one anchor and then have to switch the microphone flag and do a standup from the same location with the anchor of another brand.

Not only has News-Press & Gazette consolidated newsrooms in these markets to leverage its news resources, but it also shares creative talent and content among its news producing stations around the country to enhance efficiency further, says DeChant.

For instance, the group has deployed ChyronHego’s CAMIO for news graphics at nine of its 10 news locations around the country and is “finalizing our ability to re-skin graphics among the locations,” he says. That means a particularly creative graphic artist at one News-Press & Gazette station can share a news graphic with sister stations.

News-Press & Gazette has also put in place a pair of IP networks to share video content, including stories and footage, among its stations. One IP network is built on Brocade switching and HP blade servers that are tied together in a virtual private network. Files moved across this VPN rely on an Elemental Technologies server with a BitTorrent transfer system. The other, which is more commonly used for news sharing, is based on Dejero and LiveU IP technology, DeChant says.

The goal of all of this consolidation, workflow efficiency and sharing is the same, he adds. “The important thing is we have been able to preserve voice in a changing economic environment by making things more efficient and leveraging common technology.”

When small market TV stations can sell for only several millions dollars, there may be no room for a news operation. Something is better than nothing.