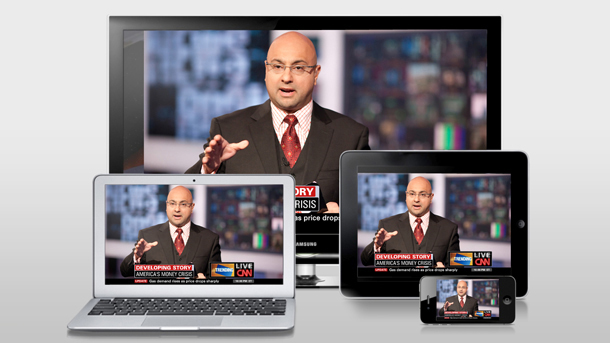 When affiliate boards sit down with network executives at the NAB Show next week, they'll be trying to figure out how they can make money from streaming their signals to smartphones and tablets either through TV Everywhere or OTT. In addition, all Fox affiliates at the convention will get a chance to celebrate the new signs of life in the network's primetime schedule.

With tensions over reverse comp having cooled for the moment, TV Everywhere will top the agendas for meetings between the Big Four affiliates and network executives next week at the NAB convention in Las Vegas.

“It’s the most interesting and, I think, primary topic in the industry right now,” says Mike Devlin, chairman of the ABC affiliate board and general manager of WFAA Dallas.

Affiliates will also want to learn ABC’s current “thinking” on OTT as well, he said. “We’ll have some discussions about just pure over-the-top to see if ABC’s position has modified a little bit since some of the other program producers have gotten into that,” he said, referring to Sony’s PlayStation Vue, Dish Network’s Sling TV and others.

“The networks and the local stations have to be in concert on that,” Devlin says.

John Rouse, SVP of affiliate relations for ABC, agrees. “We are exploring over-the-top deals and talking with distributors about that,” he said. “And our affiliates too have questions about it and we’re very open about talking to them about those ideas, those platforms, the companies that may be approaching them and approaching us. It’s a new area of distribution.”

ABC, NBC and Fox began talking to affiliates about TV Everywhere at the NAB Show two years ago. The service involves broadcasters streaming their signals so that “authenticated” cable subscribers can watch on their smartphones and tablets.

Broadcasters  would presumably be compensated through increased retransmission consent fees from the cable operators.

“Certainly NBC is moving forward on TV Everywhere,” says NBC affiliate board Chairman Ralph Oakley, president and CEO of Illinois-based Quincy Newspapers, owner of nine NBC affiliates. “They launched it on their O&O’s about three months ago. They’re testing it that way, so I’m sure we’ll get an update from them.”

Indeed they will, says Jean Dietze, EVP of affiliate relations for NBC. “The owned stations have launched both desktop and mobile, and we signed two affiliate groups thus far [Gray Television and Lilly Broadcasting]. They haven’t launched yet on MVPDs, but we expect that to be happening” soon.

Fox affiliate board chairman Jeff Rosser, an SVP at Raycom Media, says he hopes the TV Everywhere discussions address how affiliates can make money from it and speed up its introduction.

“So far, TV Everywhere with affiliate participation has proven to be a very slow rollout,” Rosser said. “In fact, I’m not sure there are any Fox stations other than the Fox O&O’s that are right now participating.… Fox does have TV Everywhere agreements with all affiliates, [but] I think it’s more of a case of affiliates not quite certain of how they’re going to monetize the investment.”

A handful of other factors are slowing things down, including clearing streaming rights with syndicators, he says. “Syndicators are taking a long time to think through what they need to do. They don’t want to give up the opportunity to obtain greater programming fees.”

And getting the syndicators’ OK to stream their programs is a “must” for affiliates, Rosser says. “We must negotiate the right to stream syndicated programming with all of our syndicators — and there are a lot of them — because we’ll have to go dark if we come to a program on air that we do not have the right to stream and that’s not going to be a rich enjoyable experience for our customers.”

The differences have mostly to do with fee structures and the pace of development of each of the network’s TV Everywhere plans, Rosser explains.

“Fox doesn’t require that we pay them a fee to participate in TV Everywhere, but they don’t pay us anything either.” NBC requires a fee from its affiliates for TV Everywhere; CBS is sharing the monthly fee it charges for its All Access OTT service; and ABC’s plans for affiliate participation “are not that detailed yet,” Rosser says.

“If all four of the networks had one user-friendly, easy-to-understand solution, that would shorten the time but they don’t,” he adds.

Rosser says many of the tensions that bubbled to the surface last year between Fox and its affiliates have subsided, at least for now. Last July, with more than 50 Fox affiliates facing affiliation renewals and Fox reportedly insisting on steep increases in the programming fees the affiliates pay the networks — so-called reverse comp — Fox affiliates became so alarmed that they convened an emergency “fly-in” meeting in Dallas just to talk about it and come up with a response to Fox’s demands.

On the eve of next week’s meetings with Fox, however, relations with the network are more placid, Rosser says. “The concern is definitely still there. It is not lying dormant completely, but it is temporarily on ice.  And the reason is because in 2015, I’m not sure there are any Fox affiliates whose network affiliation [agreements are] expiring.”

Things will likely heat up again next year, he says. “I believe there will be well more than 50 Fox affiliates who will be negotiating for new affiliation agreements.”

For CBS affiliates, the hot topic isn’t TV Everywhere, but CBS All Access, the network’s OTT service, which circumvents cable operators rather than partnering with them.

“For us, obviously, we’ll want to learn a little more about what CBS has in mind for All Access,” says CBS affiliate board Chairman Michael Fiorile, president and CEO of Columbus, Ohio-based Dispatch Broadcasting.

“We have an agreement that we negotiated which we’re pleased with,” he says. Fiorile characterized the deal with CBS as “a rollout agreement [that’s] enough to get affiliates launched on an over-the-top service.”

He declined to disclose details such as how much CBS will pay affiliates for making their programming available for streaming on All Access.

But other sources say a fee structure is in place under which CBS affiliates will initially be paid 59 cents for each local All Access subscriber, with that fee rising to 69 cents and then 79 cents per sub when (or if) subscribers increase. CBS has set the price for All Access at $5.99 a month.

Another source says the affiliate take could go as high as $1 per subscriber.

“We’re anxious to hear a little bit more from [CBS about] their experiences in their own owned-and-operated markets where [All Access was] rolled out a few months ago,” Fiorile says.

CBS declined to make Elizabeth Tumulty, president of affiliate relations, available for an interview with TVNewsCheck for this story.

CBS All Access is such an important topic that a separate meeting has been scheduled on it for all affiliates attending the NAB, Fiorile says. It’s scheduled for Tuesday morning, April 14.

Fox is also convening a full affiliates meeting on Tuesday morning. (ABC, CBS and NBC will hold their full affiliate meetings in New York in May in connection with networks’ upfront presentations.)

“A year ago, Fox affiliates were extremely concerned [about primetime] — so was Fox, by the way — so there was a lot of discussion about the primetime schedule,” Raycom’s Rosser says. “This season, it’s going to be a little different,” he predicts, citing the success of Empire, most notably, and also Gotham and Sleepy Hollow.

During the full affiliate meeting, Fox affiliates will be hearing for the first time from Dana Walden, co-chair (along with Gary Newman) of Fox Television Group since last July, and David Madden, president of entertainment for Fox Broadcasting since last July as well.

“They have not had that opportunity to interact with them yet,” says Jon Hookstratten, EVP of broadcast distribution for Fox Networks Group.

The ABC affiliate board is also looking forward to hearing from Ben Sherwood, former president of ABC News who became president of Disney-ABC Television Group in January. The meeting in Las Vegas will represent the first time the board has heard from Sherwood in his new position.

“It’s interesting and important for us to hear his thought process, what he has in mind, his goals and just have a conversation with him,” WFAA’s Devlin says.