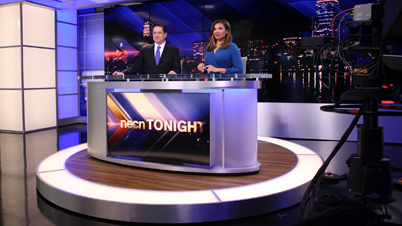 Comcast-NBCU wanted to improve the quality of the workplace at its New England Cable news regional network, as well as freshen up its look. So last fall, it began updating every aspect of the sets and technology for its newsrooms and 1,800-square-foot studio in suburban Boston. What it got is a state-of-the-art, modern, appealing, multifunctional studio from John Casey and Sacks Exhibits.

Within the next few days, Matt Noyes, chief meteorologist at New England Cable News, will start presenting his reports using a new 80-inch Panasonic LCD touchscreen — one of many new elements that constitute a major upgrade and redesign of the 24-hour cable network’s studio and newsrooms in Newton, Mass.

“This renovation was long overdue,” says Kris Kalanderi, chief engineer of NECN, which is owned by Comcast-NBCUniversal and falls under the aegis of the NBC Owned Television Stations. “We just wanted to improve the quality of the workplace and give NECN a new, fresh look.”

To achieve that fresh on-air look, NECN focused its efforts on replacing an old Miranda Technologies Vertigo graphics generator with a new ChyronHego-based system and upgrading its WSI weather graphics to the latest version of WSI Max Studio.

At the same time, NECN upgraded the look and functionality of its newsroom where more than 50 NECN reporters, producers and editors create the news every day.

“An important aspect of the design was breaking through into the working newsroom environment from the studio,” Casey says.

To achieve that continuity, Casey’s first step was to design in a series of sliding smoked Plexiglas panels between the two spaces. Opening some or all of them visually extends the newsroom into the studio. Shutting them gives the studio a smaller, more intimate feel, he says.

Casey also specified that the same RGBA (red, green, blue and amber) LED wall lighting illuminating the studio be used to light certain walls in the newsroom that are visible in shots from the set.

To control the LED lighting grid throughout the studio and in the newsroom, NECN added an Ethernet-based Ion Lighting board, Kalanderi says.

Using some of the same materials, including wood and metal, also helped to achieve a consistent look that tied the two spaces together, says Casey.

NECN directed Casey to build as much flexibility as possible into his set design for the 1,800-square-foot studio, he recalls. “I came up with the idea of a fairly clean, flexible space that can change color, and video screens are quite important so they can play graphics and change the look of the room fairly quickly.”

One example of flexibility is the main anchor desk, which can be moved out of the way easily to open up the studio. Since going on air with the design in mid-February NECN has established three different locations for the desk, he says.

Another example is the chromakey wall, which can be hidden behind one of the set walls until it is needed. When covered with a wall, NECN can use that part of the set for something other than weather reports.

The design also allows NECN to shoot the studio from 360 degrees depending upon the look that’s wanted, adding another bit of flexibility, Casey says.

The studio’s poured, self-leveling epoxy floor is quite smooth and shiny, producing “nice reflections” that adds to the sense of space and depth of the studio, he adds.

“Most of the technology in the studio was monitor walls — flat screens with a thin bezel,” says Kalanderi.

NECN uses three such walls, two 3×3 and one 3×5, made up of 55-inch Panasonic LCD monitors to display graphics and video during its news presentation.

The news channel’s artists create graphics displayed on the monitor walls with an extensive ChyronHego graphics system, Kalanderi says. “There are a lot of parts in the system, including Camio servers, Mosaic effects and Lyric Pro software,” he adds.

“The other important thing we did was to build the weather office directly inside the studio,” he says. That means NECN meteorologists have all of their computer workstations, WSI Max Studio graphics and other forecasting tools in a space where they can go live anytime.

“Yesterday is a good example,” says Susan Pascal, NECN brand and marketing director. “We had thunderstorms moving through the area. “So [meteorologist] Nelly Carreno was sitting at her computer, getting the latest information to update her report and graphics immediately, and then she stood up, stepped to the green screen and went to air.”

A major challenge facing NECN with the project was the size of its studio.

“It is a small studio,” says Sacks Exhibits VP of Operations Kevin Julian. “In a perfect world, you have three feet behind all of the scenic pieces so you can access all of your wiring and so forth,” he explains.

But giving up three feet of studio space was unacceptable, so Julian suggested a wall mount from Peerless that provides access to monitor control and wiring from the front.

“That particular mount allows you to push in the face of it, and it retracts under the carriage, allowing all access for engineering requirements,” he says.

Another major challenge was the timing of the project. “We just happened to do that in the worst winter Boston has ever had,” recalls Julian.

“We were literally shoveling out the back location at NECN, setting up table saws and shop saws, cutting and doing all of our fabrication and running back into the studio for 24 hours a day, literally for weeks on end.”

But in the end, Sacks accomplished its goal of fabricating Casey’s design in a way that ensured NECN would have use of as much studio space as possible while sticking to the designer’s vision for a modern, appealing multifunctional studio.

“We all worked very closely — the group at NECN, Kevin from Sacks,” says Casey. “It was a very involved and inclusive project, and I think the end result delivers on NECN’s requirements.”