The Future Of Wireless Mics Is Full Of Static 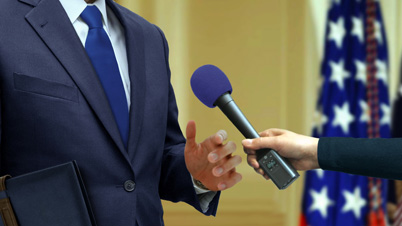 Engineers and wireless equipment vendors say the FCC's plans to reduce and limit frequencies for wireless devices following the spectrum repack next year are going to cause a myriad of problems. The commission's proposals are "not a workable solution," says engineer Louis Libin.

To Louis Libin, founder and president of technology consulting group Broad Comm and a television engineer who has coordinated frequency use since 1986, the incongruity could hardly have been more pronounced.

Less than 24 hours before, Libin was busy directing use of all wireless production gear for the final day of the U.S. Open at Chambers Bay near Tacoma, Wash.,  including 202 wireless microphones.

Now, on June 22, he was at the FCC as part of a small group of wireless mic stakeholders to meet separately with FCC Chairman Thomas Wheeler and the Office of Engineering & Technology about the future of the wireless devices.

What he heard simply did not jibe with his 29 years of real-world experience. The FCC’s priority is the spectrum auction, and what to do about wireless mics — which are so critical to the production of news, sports and entertainment for broadcast and online distribution — simply isn’t important.

The latest proposals, reflected in a Notice of Proposed Rulemaking adopted June 11, are “not a workable solution,” he says.

The NPRM proposes setting up a single UHF channel in each market, which will be shared by wireless mic users and white space devices.

“When you think about the amount of spectrum that is really used by the wireless mic community, it doesn’t work,” he says, adding that about 6,000 wireless devices –mostly in the UHF band and excluding cell phones — were used for coverage of the U.S. Open.

Howard Kaufman, technical representative for wireless mic maker Lectrosonics, was also in the meeting with Wheeler.

“Sitting with Wheeler himself, he said that Congress tasked us [the FCC] with a bill to recover this spectrum, and sadly for you, meaning [the] wireless mic [community], Congress did not provide any guidance with what to do with wireless mic users,” says Kaufman.

“Broadcasters generally don’t know this because they aren’t regularly involved with the FCC,” Libin says. “They don’t realize that this nice world where we have some stability in terms of production and the equipment we use is going to change drastically.”

Libin says the reason was on display at the meeting with Wheeler. “The FCC is not interested in broadcast,” he says.

Wireless mics are entwined with the auction and repack process because they operate on UHF channels that are unused in TV markets.

Currently, two 6 MHz channels per market are reserved for use by wireless mics, a term which is shorthand for a variety of wireless TV production gear, including mics, IFB, intercom systems and in-ear monitors worn by musical performers.

It’s not unusual for other unused TV channels in a market to be assigned on a temporary basis to handle wireless mic spectrum requirements for big, live sports and entertainment productions where more spectrum is needed.

However, repacking TV stations into a much smaller swath of spectrum following the incentive auction means less availability of UHF spectrum for wireless mics.

To preserve the freedom ENG crews need to operate on such an unpredictable basis, the company filed a petition asking the FCC to reconsider its decision to eliminate the pair of reserved wireless mic channels, which was rejected.

“The commission made clear that they are planning to eliminate and not replace them,” says Ciaudelli, who also attended the meeting with Wheeler and OET.

Another example is how the commission now plans to use the duplex gap — the 11 MHz wide buffer between incentive auction-created wireless industry up and downlinks, says Shure spokesman Mark Brunner, who also attended the June 22 meetings.

Originally, 4 MHz of the duplex gap was going to be reserved for wireless mics.

“However, the commission is alerting all of the participants in the auction that in some markets — which they term as ‘impaired markets’ — that to maximize the outcome of the auction there may be a need to have a TV station occupy a lower portion of the duplex gap,” Brunner says. In such markets, the 4 MHz proposed for wireless mic use is off the table.

Related Story  Collins | Getting Back Into The Game

As a result, the FCC is left with few alternatives other than to find new bands where wireless mics can operate, which was the subject of the June 21 meeting with OET, says Brunner.

“They have suggested a lot of different spectrum — everything from our current BAS RFU [Broadcast Auxiliary Service Remote Pickup] bands used primarily by radio stations to ENG frequencies we use for live video shots at breaking events and even unlicensed spectrum at 902MHz,” says Dennis Wallace, managing partner of Waldorf, Md.-based consultancy Meintel, Sgrignoli & Wallace.

Two leading contenders are the aeronautical telemetry band between 1435 MHz and 1530 MHz and an orphaned slice of spectrum between 2020 MHz and 2025 MHz, which currently is assigned for PCS operations, says Wallace, who also is the chairman of the Society of Broadcast Engineers National Frequency Coordinators Committee and on the board of directors of the society.

Using spectrum at a higher frequency isn’t without its challenges, one of which is shorter battery life, says Wallace.

Another is range, says Simon Browne, Clear-Com director of product management. Fourteen years ago his company decided to begin moving out of the VHF and UHF bands with its wireless intercoms in favor of bands like 1.9 GHz and 2.4 GHz.

“You can’t propagate as far in 1.9 GHz as you can with 600 MHz, but on the other hand you can reflect off buildings easier,” he says.

Sharing a band, such as that currently used for aeronautical telemetry, will take the need for frequency coordination to a new level, one for which the existing method that relies on broadcast engineers who volunteer may be ill-equipped to handle.

“There is this presumption that the industry will coordinate this itself. Fair enough,” says Wallace. But if broadcast engineers are going to be asked to coordinate wireless mic frequencies on a real-time basis in bands shared with incumbents something will have to change, he says.

“We are going to have to seriously consider how we implement that because we just don’t have the infrastructure to do that at this time.”

For Libin, who is also the frequency coordinator for New York City, setting up a shared wireless mic channel, making 4 MHz in the duplex gap available in some markets and looking for alternate spectrum “almost doesn’t matter.”

“It just shows a basic misperception [at the FCC] of how broadcast production, news, sports and events get done,” he says.

Over the years, Libin and others have invited FCC staff to golf tournaments and football games so they could see firsthand how frequency is coordinated for a broadcast production.

“They all just stand there open-mouthed,” he says. But the appreciation the FCC staff has gained for how efficiently broadcasters use and coordinate frequency for these productions hasn’t “seeped upwards into the chairman’s office,” he says.

If Chairman Wheeler were truly serious about wireless mics, the agency would have set its wireless mic policy long ago, he says.

“I am not saying he [Wheeler] is going to kill the wireless mic industry, but right now the vendors are completely paralyzed. They literally don’t know what to do,” he says.

“That shouldn’t be the case. If you are planning on this major move — this repack — they ought to have been given their marching orders long ago.”

This business about ‘We’ve been tasked by Congress to conduct the auction’ is disingenuous since the FCC has until 2021 to complete it. This is about Tom Wheeler wanting the incentive and reverse auction completed under his watch and damn the consequences. Well, Wheeler can also take the blame for the disorganization and wreckage left behind because of rushing an auction that was poorly planned. It’s just too bad the Republican commissioners are impotent to stop it.

Another Case of Government Agency tasked with a job of making things work, fumbling the entire project. Transmitter manufacturers are struggling in this economy and with the freeze on everything they are waiting in the wings…for something to happen…

Now the wireless mic industry will be struggling to re-invent itself.. the unknowing public will be confused with all the performers at live events in big markets are walking around with wired mics as wireless will not work anymore…

Wheeler is clueless, and is killing multiple industries in his wake….

Does this mean I will not be able to use my Sennheiser wireless mics and adapters?

easy solution, instead of freeloading of broadcast frequencies, take the profit made and buy a set of frequencies in auction..then charge users for access…