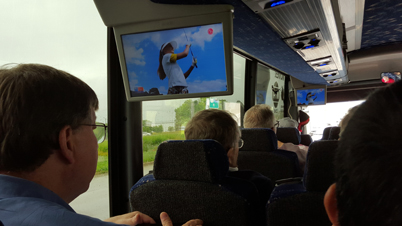 LG tested three types of its next-gen signals in a mobile environment: Ultra HD, HD and SD, all simultaneously within one channel. The HD and SD signals performed about as well as the old ATSC DTV mobile standard, delivering “clean” signals in 80% and 90% of the locations, respectively. Ultra HD, which is not meant for mobile broadcasts, didn’t work nearly as well. Yesterday it demoed the technology for more than 60 engineers in Cleveland, including reception on a bus.

“Excellent,” said Wayne Luplow, VP of LG Electronics’ Zenith R&D Labs, when asked to score the results of two months of mobile testing of LG’s Futurecast next-generation broadcast system in Cleveland. “We are very pleased with the results.”

So pleased, in fact, that LG invited some 60 broadcast engineers to Cleveland yesterday to share some of the results and demonstrate the system.

The Futurecast system is one of several vying to be part of the ATSC 3.0 standard now under development by the Advanced Television Systems Committee. Others include OneMedia, DVB, Technicolor, Sony, ETRI, Samsung, NHK and CRC.

Inclusion in the standard not only brings technical bragging rights, but a share of the royalties once the standard is incorporated in transmission gear and receivers.

Luplow said that he anticipates that Futurecast will, in the end, be a big part of the final standard — so big that the system demonstrated in Cleveland and the test results will be “quite comparable” to the final standard.

Proponents of ATSC 3.0 envision a standard that will give them the flexibility to broadcast Ultra HD (4K) programming to fixed receivers as well as HD and SD programming to mobile devices.

The basic tradeoff is between the robustness of the signal and resolution of the programming. The more data assigned to resolution, the fewer will be available to insure good reception.

For the testing, LG, with the aid of GatesAir, refurbished a three-tube IOT transmitter that Tribune’s WJW had last used in 2009 during the analog-to-digital transition. From a tower on a ridge 10 miles south of downtown Cleveland in Parma, Ohio, the transmitter operated on ch. 31 with 430 kw of effective radiated power.

LG tested three signals in mobile environments: 1) an Ultra HD signal at 15.7 mbps; 2) an HD signal at 1.25 mbps; and 3) an SD signal at .59 mbps. The signals ran simultaneously within the one broadcast channel.

The results were compiled from many receive locations, ranging from the city’s concrete canyons to rural areas 50 miles from the transmitter, Luplow said. And many of the locations were challenging, he said. “This is a hilly region — lots of valleys and stuff.”

The broadcast engineers got a chance to see the HD signal in action. While riding through the streets of downtown Cleveland on a tour bus, LG displayed the HD signal on monitors within the bus. The signal was received through a 7-to-8-inch whip antenna attached by suction cup to the window and a prototype 19-inch 2U receiver tucked inside a luggage bin.

The signal held up even as the bus rolled down a highway at 50-60 miles per hour.

The engineers also got a look at the Advanced Warning and Response Network (AWARNS) in a demo at Raycom’s CBS affiliate, WOIO. The system, which is to be incorporated into the ATSC 3.0 standard, will allow viewers with a smart TV to click through on-screen alerts to get more information on emergency situations. That information can take the form of text, graphics, maps and video.

“With ATSC 3.0 and AWARNS, the public won’t be dependent on the Internet and local phone service,” said WOIO GM Dominic Mancuso, who hosted the demo.

Unfortunately for LG, a couple of the other demos did not go so well.

LG took the engineers into the basement of the Oswald Building at 1100 Superior Avenue with the intention of showing the “deep-indoor” reception capability of the SD signal using small, simple indoor antennas.

The SD pictures appeared for a minute or two, but then cut off. The Zenith officials speculated that the problem was overworked field programmable gate arrays that were being used as receiver chips.

“It just goes to show anything that can happen, will happen,” said Zenith’s Tim Laud.

Later, during a reception inside the Rock and Roll Hall of Fame, LG set up three receivers so that it could display all three signals side-by-side-by-side. With the aid of a fairly large antenna outside the reception room in the Hall of Fame’s glass enclosed atrium, the Ultra HD and SD signals lit up two of screens. But the third was dark. Once again, a receiver had failed.